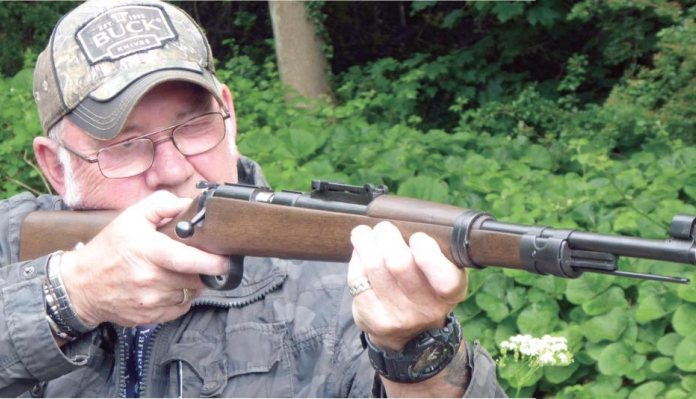 As I get older, I realise that impulse buying of guns does not make too much sense, so recently I began thinning out the herd, to concentrate on what I like best – lever action rifles.

Among those to go, were some .22 rimfire pieces, amongst which was an example of the Norinco JW 25A, often called the Mini Mauser.

Norinco (an abbreviation of China North Industries Group Corporation Limited) is a relatively new player in the firearms industry, being formed in 1980. Their products encompass everything from .22 rimfire pistols (their M93 is a close copy of the Colt Woodsman) to battle tanks, with a good assortment in between. At one time or another, they have copied the M16 rifle, the AK47, Winchester shotguns, the Colt 1911 and a Dragunov sniper rifle among others. I have imported a number of Norinco arms in the past and my experience with their guns shows that quality can be a bit variable when it comes to fit and finish. Their .22LR lever action rifle for instance, which looks to be loosely based on a take-down version the Winchester 9422, was quite rough out of the box, whereas the clone of the Winchester 1897 pump shotgun was fairly respectable for the price.

The JW 25A, or Mini Mauser, that we have here, while not coming up to Anschutz standards, is nevertheless a good little rifle for the price. A price, incidentally, which has not increased that much in the last twelve years or so. As its nickname implies, the rifle is based, cosmetically at least, on a Mauser, in this case the KKW single shot cadet rifle, itself a close copy of the famous K98 military arm and is about three quarters of the size of the centre fire rifle. Traditionalists will no doubt point to the differences between this rifle and its illustrious big brother, but for the more casual user, looking for a rimfire rifle that is a bit out of the ordinary, this is close enough to the real thing, without the heavy recoil and ammunition costs of the 98K. There is even a bayonet bar at the front (check your club calendar for bayonet practice events!) and the stock has a security bar fitment. A short, around 12-inch, cleaning rod is screwed under the barrel.

Over the years, I have seen variations in the colour of the wood on these rifles, but this example is about as nice as any. The two-piece woodwork (there is a small hand guard on top of the barrel) is probably beech with a dark stain and a satin-like finish and the fit is generally very good. Where cut-outs are visible, the magazine well and receiver aperture, surfaces are a little rough but don’t really interfere with performance and you could easily smooth them down yourself if they bother you that much. The stock is cut to accept a sling, much in the manner of the military rifles, and the rear barrel band has a matching loop for the other end of the leather. The rear end is finished with a steel butt plate.

CZ is an abbreviation of Ceska Zbrojovka (meaning Czech Armoury) and many shooters will be familiar with their super range of bolt action rimfire rifles, while others will have fond memories of the superb CZ75 pistol. The rifles have built up a solid reputation for workmanship and performance at a reasonable price, so it should come as no surprise that Norinco chose to build the action of this rifle around that of the CZ452.

The bolt cocks on opening and has a cocking indicator, in the form of a central shroud. When in the FIRE position, the top-mounted safety has a cutout which allows a ‘wing’ on top of the shroud to pass through. A red dot can be seen on the bolt body in this position. Pushing the safety catch forward to the SAFE position covers the red dot and blocks the shroud’s forward travel. I have no experience with CZ rifles to make a comparison but the safety on this rifle takes a bit of force to engage. If this rifle has a weak spot, it is in the bolt area. Travel back and forth feels a little coarse and a bit of work with some fine emery paper would improve this immeasurably, although I have to say that the example I had was bought second hand and felt much smoother. Perhaps it will bed itself in with use. While not a two-stage trigger, there is a tiny bit of free movement before resistance is felt, from where it breaks cleanly at around five pounds or so.

magazine looks to be identical to the CZ versions, so perhaps the rifle will take the Czech 10-round magazines, although I feel this would spoil the looks of the rifle, protruding as it would from the stock. Magazine release is via a spring-loaded catch in front of the box and it dropped free easily every time.

The sight arrangement is based squarely on a military style set-up as befits the overall appearance of the rifle. The rear has a V-notch blade fitted on a sliding elevator, which is graduated from 25 to 200 (yards or metres?) in increments of 25. You need to depress a spring-loaded button on the left of the elevator to move the blade fore and aft. The front sight is an inverted V-blade adjustable left and and right, and for a nice touch covered with a military-style protector. Out of the box, the blade was a touch to the right of centre, so I tapped it back to where I thought it should be. First time out, it was shooting three inches or so to the left, so I had to tap that sight back to its initial position, which improved things. The blade is set in a ramp with a serrated rear edge and this is integral with a 25mm collar around the front of the barrel. This collar is held in place by a cross pin, which obviously locates in a slot in top of the barrel and drifting out this pin should allow the collar to be removed, meaning the barrel could be cut for a moderator.

Should you wish to fit some glass to this rifle, the top of the receiver, in front of and behind the ejection port, has an 11mm scope rail milled into it. The rear sight base appears to be permanently attached to the barrel and, as such, precludes the use of any scope with an objective lens bigger than around 40mm. Fit a suitable scope and a moderator, dress it up with a repro leather sling and how cool would it be to be bunny bashing with your own mini version of a K98 sniper rifle?

In use, this rifle is a joy to handle. It accepted a variety of ammunition fed to it without any issues whatsoever. Once that bolt has been ‘doctored’ or worn in, the action is very smooth and, if I were to use this rifle with the standard sight set-up, I would deepen the rear V-notch slightly and possibly thin down the front blade a little. From experience, I have to admit that the addition of a scope does improve things, but this rifle is never going to be a precision target piece, but it provides heaps of good plinking fun. Where this rifle scores, is in the looks department. It is to my knowledge the only reproduction rimfire military-style rifle made today and short of paying big bucks for a .22 version of the real thing, this is as close as you are going to get. Pull this out of your bag at the range and your street cred goes up several points.

Should you wish to dismantle the rifle, then it is similar to its German grandfather, in that there are a couple of pins holding the two barrel bands and three screws in the trigger guard area.

This rifle will take some beating in the value for money stakes and also scores highly for pure enjoyment, putting a smile on the face of everyone who tried it. It would also make a cost-effective club gun, to get beginners used to open sights and bolts. If you can find a preowned model that someone else has already ‘broken in’, so much the better.