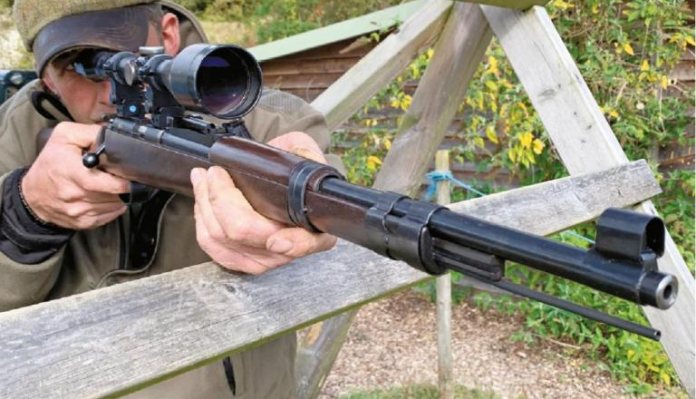 This review started off as a Rimfire Delights story, as I had tested this rifle back in 2010 and thought it would fit in with this occasional series that we run in the mag. I was looking for images and could not find any, so I asked the importer Henry Krank & Co Ltd, if they still had an example, as I thought they were no longer current. What turned up was a brand-new gun; so obviously they are still available, hence the full test.

Made in China, the Norinco JW-25A or 33/40 is an unashamed copy of two famous rifles; first, the Czech Republic’s CZ452, which in many ways is the quintessential 22 rimfire bolt-action and has been so for many years. Also, one of, if not the most popular of its type in the UK. Second, the Mauser K98, Germany’s service rifle chambered in 7.92x57 IS (centrefire) in the Second World War. This co-joining of models has produced a unique firearm, that combines all the economy and ease of use of a 22 Long Rifle cartridge, built around a classic military bolt-action design. So, good looking, but with none of the harsh recoil and expense of the fullbore original.

And it’s here the history lesson starts! After the end of WW1, the treaty of Versailles imposed severe restrictions and reductions on Germany’s military might. One was the limitation of fullbore ammunition production; so, to get around this for training purposes, they designed a series of single-shot, 22 rimfire copies of the Mauser Kar 98K service rifle.

Called the Kleinkaliber Wehrsportgewehr (small calibre military and sporting rifle) they were known generically as the KKW and produced by various manufactures up to 1939, when they were discontinued. Historically, theses rifles are very collectable, with good condition examples commanding very high prices avid collectors are happy to pay. I have seen example of the various types going for up to $2000. Bruce Potts has already done a feature on the originals, but what I have here is a good look-a-like of the KKW, which to my mind is one of the cutest, military bolt-action copies ever!

OK, it’s not pure (exact in every detail), as the receiver and safety catch arrangement rather gives it away a little, as a CZ452 copy. However, Norinco have gone to some considerable lengths in terms of the furniture and fittings, to make it more than acceptable; well, certainly to my eyes. It occurred to me back in 2010, just when the 22 rimfire, semi-auto military-type look-alikes started appearing, that a bolt-action alternative might have an appeal over all the AR15 clones.

The JW-25A is in fact just one of a series of four models based on the same chassis, with other less martial variants available. I have encountered these Norincos before over the years, badged up as something else and marketed as cheap rimfire sporters by various companies. I believe at one stage Highland Outdoors offered one, called the Puma, bundled up with a scope and moderator?

For the purist’s, major differences are the detachable, 5-shot magazine (a la CZ), the clean receiver with integral 11mm dovetail and the 452-2E rotary, lever-type safety catch located on the top of the bolt shroud that swings forward for SAFE and reverses for FIRE. This is dropped into very K98-like furniture, that although shorter, shows nearly the same girth in the butt and near identical dimensions. It’s made of what looks like beech and I’ve seen it in a light brown stain, as well as a darker finish, as with this new example here. Norinco have even gone as far as mimicking the steel butt plate, rear integral sling slot and metal stacking hole/bolt disassembly tool of the K98. This last is just for the look, as the CZ bolt does not strip in that manner.

Moving forward, there’s the barrel with the large, tangent-type rear sight, then a short hand guard retained by a steel band that doubles as the front sling loop on the left side. This then drops away to expose the barrel again, with a forward band combined with the bayonet bar, short section of cleaning rod and front sight. Compared to the real 98K, the Norinco gives away two pounds in weight and three inches of barrel, which is no big deal, it’s a compact featherweight, compared to the real thing!

The CZ bolt handle drops straight down and angles out a little with a steel ball end, so looks and feels the part. The safety is a dead ringer and somehow Norinco has managed to build-in that clunky and stiff feel that the 452 was noted for. This example was particularly stiff in operation but would doubtless ease up with use. The bolt body is round and shows the usual face with extractor and the fixed ejector at the rear of the magazine well, so a bit of speed is required to kick the empties out. The trigger sits in a large, steel guard and is very industrial in feel, that’s a polite way of saying heavy and graunchy at around 5-6 lbs. It worked 100% and was not hard to read and would doubtless ease up with use. All metalwork is blacked.

Feed is from a steel, 5-round magazine with the release catch at the front of the well. It looks identical to the CZ clip and I figured a 10-shot might fit, I borrowed one and it did, but at that stage I was unsure if it would feed. The rear sight is marked from 25 – 200 (meters I presume) in 25m increments and shows a small V-notch, as the K98. The front is a blade on a short ramp with a removable, pressed steel, tubular protector and is windage-adjustable by drifting it left or right

Fitting a scope is easy enough using the standard, 11mm dovetail integral to the top of the receiver. However, you will need high/ medium to high mounts to clear the rear sight assembly with anything much over a 40mm objective bell. You might say why bother, as it’s essentially a K98? This is how I viewed the first gun I tested, but it occurred to me that some glass on top would improve accuracy and widen its appeal, as well as giving it that sniper look.

To facilitate this, I dug out an old Pecar of Berlin, Champion, 8x52 fixed power scope on a 26mm body tube (not one inch). I’d had it for many years, just waiting for an excuse to use it and it really looked the part on this baby K98 sniper rifle or Scharfschüzengewehr. I used medium 30mm rings with 1” adaptor shells that were flexible enough to accommodate the 0.6mm+ diameter difference. These were attached to a pair of Sportsmatch RB5 riser blocks that fit to the 11mm rail to offer a Weaver/Picatinny base for the rings. These RB5s have got me out of trouble on many occasions.

I was struck by the good looks and feel of the Norinco from the box, as I think the Mauser 98 military series (G and K) are possibly the best looking service bolt-actions ever built. However, this 22 rimfire KKW copy solves the problems of expensive centrefire ammo and heavy recoil of the original 7.92x57mm rifles. This is without doubt a fun gun, but with some potential.

In Scharfschüzengewehr mode it was shooting an inch at 50 yards. It ate everything I fed it, from various sub-sonics up to medium and high velocity reliably. Also, the CZ, 10-round polymer mags worked, which was a plus. Ammo-wise, it showed a preference for Hornady’s 40-grain lead round nose and the same weight in Remington’s HV Thunderbolt. Given the heavy trigger and thick cross hair of the Pecar, I reckon it could go sub-1” with a finer ret and trigger job, but certainly acceptable as is. Iron sights obviously will reduce this, but with careful alignment and technique (tip of blade in the V consistently) bouncing around fired 12-gauge cartridges at shorter ranges and grouping around 4” at 100 they were good enough.

The action was a bit clunky but started to smooth up after 100-rounds or so and it was easy to maintain your firing position and work the bolt consistently. The worst thing was the stiff safety, as that took some effort going ON and coming OFF. I traced the problem to the lobe on the lever that pushes the cocking piece backwards out of sear engagement, the solution; a strip down and smooth up would doubtless improve operation.

Comparison to the modern sporting bolt-actions we might use today; like my Ruger M77/22 is unfair and shows the Norinco is in a class all its own. For example, it’s not threaded for a moderator and with that foresight layout, that job would not be too easy. However, it’s not that sort of rifle, but one that exemplifies the fun of 22 Long Rifle guns; cheap to shoot all day long and I’m a sucker for that sort of thing. With the iron sights it’s a bit of a challenge, but a satisfying one. However, put a scope on and it’s good out to 100 yards with enough accuracy to satisfy most shooters. Me; I like it, as it looks like my favourite military bolt-gun, which is good enough for me!