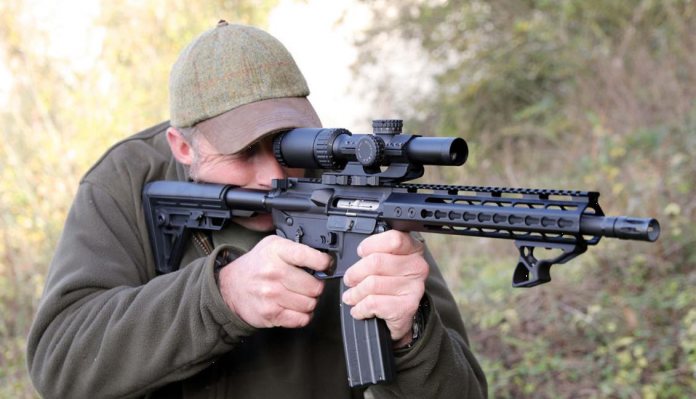 For as long as I have been shooting (don’t ask) the application of carefully selected accessories can, improve your game in competition. However, this concept must be tempered with sense, as if you get over-enthusiastic, you can end up with a gun that is too big and heavy to be practical. We’ve all seen it, a guy turns up with everything but the kitchen sink on their rifle and they struggle. So, if you are unsure, then maybe look at what the experts are using or what the specialised customisers are offering!

So, let’s take Mini Rifle-type (MR) use as an example. First, the 22 AR is king and there are many options. For me it would be a 16” barrel, though most would go for a 12”, free-float forend, improved trigger and selected ambidextrous controls. Add in a telescopic (CAR15-type) butt, which is near mandatory, larger (non-A2) pistol grip and a forward grip. Oh yes and enough magazines to give a few spares; six is about right! You can of course buy a base rifle then add what you want, which is easy and gives a sense of personal achievement as you built it! Or, buy a comp-ready package.

On test, here, is North West Custom Parts (NWCP) NWC-15 Comp Model from Wayne Titterton. The build is unsurprising in some areas and one of my writers, Eddie Putwain of Team Red Flag, runs one for MR competition and swears by it. But where this gun differs slightly, is in what’s on offers as a package deal, as Wayne built it to be shooter-ready, apart from optics and he’s got that covered too.

The gun shows aluminium receiver halves stamped up NWCP. The upper is an A2 with ejection port cover, case deflector and forward assist, this last is cosmetic, as the 22 bolt system is not compatible with this function. The upper is flat-topped/Picatinny, as is the 10”, free-float forend, so no probs fitting irons or optics. It shows K-mod slots, so offering easy fitting of other accessories. Inside is a medium/heavy 12” barrel with A2 brake threaded 1/2x28 UNEF.

Furniture all comes from Trinity Force and consists of their rubber over-moulded pistol grip, which is hand-filling, secure and has the in-fill back strap for that perfect hand position. The 6-position butt is a simplistic, L-shaped, rubber-covered comb and nicely aggressive, slotted recoil pad. It’s a bit basic and wobbly, but is all you really need. Finally, and something that does double duty, is the Siege Grip, which is like an abbreviated Magpul angled fore grip (AFG). With the short 12” barrel being very close to the forend, it acts as a welcome hand stop, to stop your hand sliding forward into danger. A final feature is the enlarged trigger guard, which just allows better finger access.

Controls, like I said are all ambi, with a Trinity Force safety, this is really useful as the R/H paddle allows you to easily flip it to SAFE as required. The magazine release is a Botech, so giving left side operation if required and is complimented by an enlarged/ extended Odin XMR2 button on the right side. In the early days, I never thought extending the mag button was worth it, but now it seems like good sense!

Following on from that, and again something I have on my Speedmaster, is the extended and ambidextrous NWCP charging handle. It gives so much more to get hold of for stoppage drills and easy access from either hand, again a must for a comp gun! Finishing off the package is a Rise Armaments, RA140 single-stage, drop-in 3.5lb trigger system. The break is good with virtually no creep and the weight safe enough, but the release is precise and predictable in operation. At just £145, this is a great trigger for your AR, no matter what calibre!

Finishing off the deal is the fact that three, Black Dog X-Form, 25-round mags are included, which is going to save you around £90. Unlike the earlier version, the X-Form shows metal feed lips and from my perspective seem to fill a lot easier. OK, it hasn’t got the pull-down, side buttons of the Smith & Wesson and others, but it’s no thumb buster either!

Compared to some other 22ARs – S&W 15/22 and Kriss Defiance, the NWCP-15, due to its standard, A2 upper, cannot offer full last round hold open and by association bolt release. The magazine platform blocks the bolt on the last round, which then goes forward as it’s removed, which then makes removal a 2-handed job, as opposed to just pressing the mag release. You can set the bolt hold open manually, but it only opens up about ½”. But this is the way with any AR15 upper of this type with a 22 bolt system. The trick is not to run the mag dry, as it will then exit the well in the normal manner, allowing for a faster reload.

Truth is; that’s just something you get used to and factor in and would not put me off! Running the gun on Winchester M22, 40-grain HV showed it could shoot well enough with ½” @ 50 yards off the bench, which is more than enough. Reliability proved acceptable, with the occasional and unavoidable under-powered round not fully cycling the bolt to feed, but there’s not a lot you can do about that! Overall, a nice piece, and as I said, pretty much comp ready from the box.