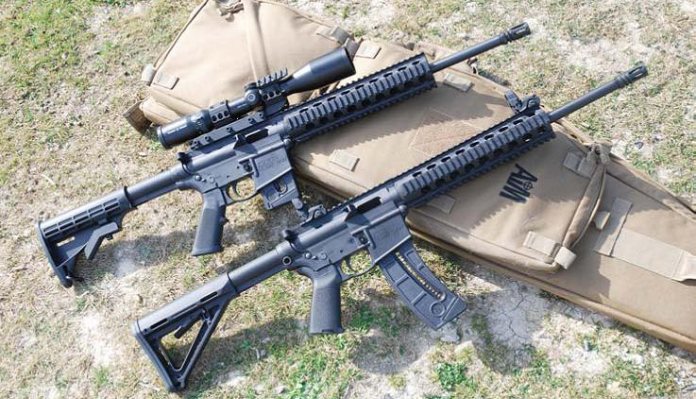 So, what’s so bad about a plastic rifle? In the past, that material usually meant cheap and nasty; for that think easily breakable and unreliable. However, the Glock pistol soon put that to rest and as a design created a whole raft of polymer-framed handguns we see today, It’s hard to tell but the new 22 AR semi from NWCP is polymer-framed and a real shooter, note the trinity Force 1-6x24 scope and mount so raising the bar on this generic material. A fact not lost on rifle designers, who then got on the same train, but to the modern shooters, possibly the most radical product from the USA was Smith & Wesson’s Military & Police (M&P)15/22 semi-auto 22 LR rifle!

A design that was one of the first to introduce this modern manufacturing principle to UK shooters. Called ugly by some and written off by others as a short life product, the M&P went on to become one of the most respected and costeffective rimfire, military look alikes around. I’ve had one for some time and its had around 10,000-rounds through it with no real problems! The Smith was soon followed by others, with Beretta’s ARX160, Walther’s Hk36 models and the poly lower framed SIG 522. Suffice to say, they are here to stay and this technology has also been used on centrefire versions too.

Wayne Titterton of North West Custom Parts (NWCP) is at the forefront of building custom 22LR semi-auto and straight-pull, centrefire AR15s for the UK market. So, his latest product, a budget AR with polymer upper and lowers looked interesting. Made by a US company called Vulcan Arms, they are mil-spec product and built as 223s. The moulding and dimensions are spot on and apart from the small moulding marks and weight difference, you would be hard pressed to see that what you were holding was not aluminum alloy but polymer!

As I said, the whole idea is a costeffective, but quality, 22 semi-auto AR; 223 straight-pulls are in the offing, but will be T-handle operation only. My example was an M4, military-style build with integral case deflector and ejection port cover, with a 16.5” barrel, muzzle brake, oval (carbine) handguard, buffer tube and Spike’s Tactical telescopic butt and an A2 pistol grip. The upper receiver is a flat top Picatinny-type, up front is a classic M16, A-frame sight and the option of rear D-handle.

The bolt unit is your typical insert system that features an integral recoil spring and stabilising rails. Controls are standard; magazine button at the rear right of the mag well and a single-sided safety catch left above the pistol grip, plus the bolt release, forward left on the upper. Operation is by the standard, T-handle. But any AR accessories will fit, so you can customise the hell out of it with extended and ambi controls etc. My tester came with a D-handle, for optics I had a Trinity Force 1-6x24 compact scope and QD mount that NWCP brings in.

Feed is from Black Dog magazines, which are the default item for guns in this build spec! I say this, as rifles like the M&P 15/22, use a dedicated feed system that provides the all-important automatic last-round hold open and bolt release function. With 22 ARs using a 223 receiver and Black Dog mags, the only hold open you get is the magazine platform rising and blocking the bolt movement, it works but is hard on the magazine over time! Equally, the bolt release/hold open also does not function with an empty mag in place and only gives partial operation!

The finish is a grey phosphate on the barrel, with the polymer receiver halves being black. The later model, oval hand guard fills the hand much better than the original roundtype and the lack of firing hand web support is typical of the A2 pistol grip, which is easily remedied by after-market options. As I said, the asking price of £645 is achieved by basic and serviceable components.

The trigger too is typically military with that firm and long AR15 pull. There’s little finesse here but it’s workable! It’s funny, I’ve owned three, 223 Rem semi-auto Colt AR15s (pre - the 1988 ban)! An original AR15 rifle with triangular handguards; probably the best looking of the family, a CAR15 16” carbine (both being 1-12” twist) and the later A2 with the improved sights, handguard and 1-7” twist, 20” semi-heavy barrel. All had similar triggers and it never bothered me then; it was only later. when I got more savvy, that I got pickier!

For me, the main priority with any 22 semi-auto rifle is reliability, accuracy with 22 Long Rifle is a given, though I do find in most of cases a bolt-action will out-shoot semis. The biggest improvement to performance you can give to one of these rimfire ARs is a better trigger. However, this rifle is more about basic and serviceable than match-grade, so its firm feel and medium/heavy pull are fit for initial purpose.

Ammo went to Winchester 22 sub-sonics and M22 round-nose and Magtech hollow points; these last two were both high velocity offerings. The gun ran well with everything; even the very dirty Magtech loads, though these had some ignition issues, that were not down to the rifle but the fact some were inconsistently primed. So, you’d be banging away, then ‘click’ as the hammer fell, cycling the action as my first stoppage drill showed the rim well and truly struck. Re-positing the round with a new section of rim in most cases fired, so like any semi-auto mech find out what it likes and runs with. On that point you did not always get first time live round extraction.

The barrel is an H-BAR type and is probably heavier than the rest of the gun put together, which gives the rifle a nose-heavy feel. In use, I liked this, as the forward weight seemed to me to add to stability, it’s not about recoil control, which is negligible in 22LR, but maintaining a solid aim and position, which it did easily! In terms of reliability, I got up to 400-rounds with the only problem being the occasional priming issues of the MagTech ammo!

Best results came from the Winchester loads, with the rifle shooting ¾-1” at 50m; with what is quite a heavy barrel for a 22 AR, this was more down to the trigger pull than anything else. Were this my rifle, then either a drop-in replacement mech, or a few subtle replacements to the standard mechanism would be in order. But that is down to you, as you might be happy with what you are buying, as I’m sure a lot of people would be for the price!

On that point, a search through the websites showed a standard M&P 15/22 to be around £699, which is quite an increase from a couple of years ago! So, the NWCP polymer at £645 is not a bad deal. But it’s still a case of swings and roundabouts, as its M4-type look will appeal to some shooters and not others. Equally, the Smith’s fully functioning and realistic AR controls are nice, compared to what’s available from the NWCP rifle. I would be the first to admit my Smith offers more, but I still like the polymer for what it is, which would be the reason to own it. But this rifle offers some good potential and can be easily customised and upgraded to suit, at your own financial pace.