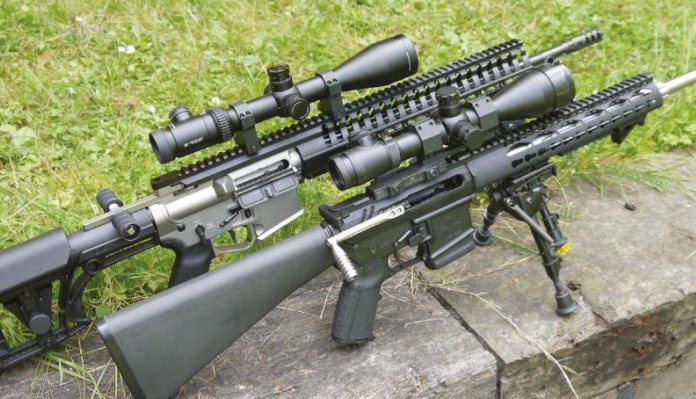 As an AR15 fan, I’m always on the lookout for new innovations; and given that most manually-operated (manopp), straight-pulls are produced by custom houses, it was a surprise to see something coming from the USA, purpose-built for this mandatory UK requirement. Called the ReVolt, it’s made by Patriot Ordnance Factory (P.O.F.) and not primarily for our country, but as an alternative to self-loading rifles, but still embodying all the advantages and accuracy potential of a custom AR.

I first encountered the ReVolt in 2015; I was sent one by Suffolk Rifle Company in 308 Win (ReVolt Heavy). I’d never heard of it before and was immediately impressed by the design and build quality. Delving deeper, showed a number of unique and practical features for this sort of hybrid design. Today, the rifle is distributed by Highland Outdoors.

Original, post-1988 ban ARs, had no gas parts and were hand-operated by the standard T-handle for each shot. Not an ideal solution, nor offering enough effort to reliably unstick a fired case (primary extraction); especially with hot ammo. A few years later, Bob Clark, Southern Gun Co (SGC) came up with his ambidextrous, side-cocking Speedmaster design, which revolutionized UK AR development; and, since then, all the small custom builders followed suit. Called ugly by some, but if you want to run a man-opp AR without tears; mandatory!

Rather than cutting the receiver walls, as SGC and others did, and bolting a handle directly on to the bolt carrier, P.O.F. re-thought the T-handle. Now shaped like a crucifix, with long, ambidextrous roller handles, it sits 1.25” forward into the rear of the receiver and offers good positioning and ease of operation. There’s plenty to get hold of and, being made of solid stainless steel and not light aluminium, it’s stronger and won’t snap under load, as can happen with constant operation using the T-handle.

That would be enough for some designers and it would probably handle most ammo- types adequately, but that requires more effort and starts to make shooting a chore. P.O.F. cut four, small equidistant slots in the chamber neck. Doubtless taking a lead from the German, Heckler Koch G3 7.62 NATO service rifle of old, which had a fluted chamber to assist and smooth extraction on this recoil-operated system. This literally floats the case on a thin layer of gas, so reducing the effort required for primary extraction. The G3 had a very aggressive action, which pretty much ruined the ejected case; not so the ReVolt, which, with its E2 Extraction Technology, is far subtler.

Tests with the 308 version, even using steel cased ammo proved that it worked and, to my knowledge, even with hotter Service loads and heavier weight ammo I had zero, primary extraction issues. Next, came the ReVolt light in 223 Rem/5.56x45. Although looking identical, the two rifles differ only in size and weight; the Light is 8.2 lbs and 38.5” and the Heavy 9.2 lbs and 40” butt to muzzle. However, and saying that, the Light, when fully bombed and scoped-up, feels a handy enough piece and would be my choice!

The ReVolt is a slick looking and wellpresented rifle, as it’s made by people who produce real AR15s for all sorts of endusers. The Light spec offers the following: a nitride-finished, 18.5” fluted match barrel, with a medium profile and 3-port muzzle brake as standard. The twist rate is 1-8”, so pretty much where it needs to be and it’s stamped up as 5.56 NATO, although will accept 223 Rem too. The barrel nut is fluted and oversized and we are told it also acts as a heat sink.

The build is slightly different on the 223 gun, the lower receiver is billet-machined from solid, but the upper looks to be a standard, AR15-style build, although both show a matte silver NP3 finish. The 14.5”, monolithic, M-Lok, free-float forend runs full length to the end of the receiver where it’s screwed into position; so, no misalignment or rattle. This is about as rigid as an AR15 optical interface can get. Slightly different from the original, the 12 O’clock Picatinny section is removable, apart from two shorter runs top and bottom front. This bit is not always utilised and will allow the lower mounting of larger objective scopes.

Furniture-wise, the original Magpul MOE pistol grip has been replaced with a more upright shape, that retains the fill in back strap. The fixed butt is a Luth AR MBA-1 and offers adjustable LOP and comb height. The underside is cut out to offer a grasping hook an there are ambi QD sling sockets on its sides and also on the forend.

Controls are standard AR-positioned and all ambidextrous, including magazine catch, manual bolt release and safety. Inside the trigger guard is a second manual hold open catch, which seems a bit belt and braces. The positioning of the operating handles allows for a case deflector and ejection port cover to remain, the former making it a good bet for lefties too! Feed is by standard AR magazines and it’s supplied with a 10-round P-Mag.

The bolt is fairly standard AR, although shows a roller on the cam follower, which should make for smoother operation. Unusually, the head is sprung, which to a degree probably helps primary extraction. P.O.F. fit their own, drop-in trigger pack, which is retained by KNS anti-walk pins. The break is a quoted 4 lbs and offers crisp and clean operation. The shape of the blade is unusual, as it angles forward with a small curved position at the end. They call it an Enhanced Finger Placement and it does just that, by putting the pad of your GO FINGER exactly where it needs to be! However, I found it not as instinctive to get on to, but they do offer alternative blade shapes and mechanisms.

I set the Light up with a Leupold VX 5HD 3-15x56 scope in their Mk2 one-piece mount; pretty much a Warne copy. Up front, a Magpul bipod, a design that is certainly growing on me. Ammunition went to my standard 69-grain reload using Sierra Tipped Match King (TMK) bullets over 24.3-grains of Ramshot TAC, along with Hornady’s 75-grain Steel Match and a similar 55-grain load. Plus PPU 69 and 75-grain HPBT Match.

Initial impressions are of a well thought out and built, cool looking AR15; although not a massive fan of ambi controls, I appreciated the safety and also the right-side bolt release. No complaints with the trigger, but I’d opt for the model with the straight blade. I’d have also liked the option of a longer barrel; as why have 18.5” when you could have 20”, certainly in a 223? However, overall the ReVolt comes together really well as a shootable and practical design. Interestingly, the 2015 price of the Light was £2400, which, given the features and build quality, is acceptable for a high-end product. In 2019 Highland quotes £2495.99, pretty good. However, the 308 Heavy is £2995.99.

So, was the Light as reliable as I remember? The simple answer to that is, yes! Ballistic and accuracy results were varied, as we shall see (BALLISTICS), but every load I put through it ejected smooth and easy, even those steel cases, which can be a bugger on primary extraction. I was surprised that my pet reload did not hit the ½” or that the PPU 69-grain Match did not come in sub-MOA; but was more than pleasantly impressed with their 75-grain Match loading. If nothing else, this data points the way for handloading.

The fully ambidextrous control package is very user-friendly and would make this gun a good bet for those left handers looking for a more, port-side compatible AR15. The large cocking handles are in your face and it took me a while before I stopped moving my head back as I opened the action, as they stop almost on your nose. However, the overall impression is that P.O.F. have done their homework on the ReVolt, as it looks good, feels good and works well. Accuracy? Well, find the right load and it’s a near ½” gun from the box.