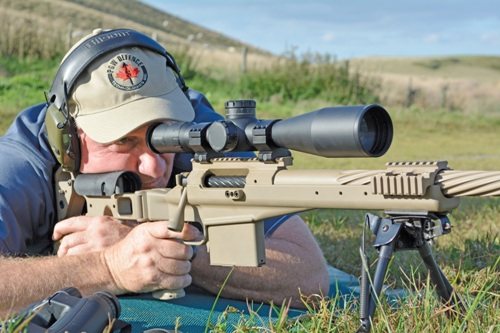 PGW (Prairie Gun Works) are a Canadian company who have chosen a small but specific area of the firearms market. The Timberwolf is the mid-sized variation of their three rifles in 308, 338 and 50 BMG. These calibres pretty much cover all needs from long range sporting to real world sniping. On test is the 338 Lapua version, which is a fine cartridge with few of the restrictions of the .50 BMG round in terms of recoil control and quality ammunition availability or reloading! So I made my way to WMS Firearms Training run by Andrew Venables who import/distribute the PGW range.

Designed from the ground up using premium stainless steel match barrels and custom receivers, the gun is paired to a solid aluminium chassis system with a beefy hinged butt stock to assure the shooter their rifle will stand up to anything. Starting out with the 26” barrel, the external spiral fluting is very noticeable, tactile and rotates in the opposite direction to the inner rifling to allegedly improve barrel harmonics and is certainly a trademark visual feature. The whole rifle is Dura/Cerakoted in a flat dark earth brown and this seemingly lessens the bulk of a 47” rifle (36 1⁄2 folded) that weighs in at a pleasant 9.2kg/20.25lbs when scoped up and ready to shoot. The muzzle is threaded at 0.75”x20 TPI (with spigot) for a laterally ported muzzle brake (supplied) or moderator. A 338 will realistically always wear one of them; it is a true 1500 metre capable cartridge with appropriate recoil.

LIGHT ON ITS FEET

The barrel remains a solid inch and a quarter in diameter all the way back to the receiver and fully floats along the forend underneath/beside multiple Picatinny accessory mounts that will suit NV units in front of the scope’s objective if required. The action is fairly conventional in design, a twin lugged bolt opening 90° with plenty of primary extraction to dislodge the brass. The face has both plunger ejector and claw extractor for 100% reliable function. Feed is from a single column, 5-round magazine and was deceptively smooth and refined in a design seemingly quite military and workmanlike.

A single catch to the rear drops the mag free. The bolt handle drops straight down with a mid-sized conical knob and a 3-position wing safety lever sits atop the shroud, that gives FIRE (forward) SAFE (middle with bolt operation and SAFE (rear) bolt locked. Bolt removal is facilitated by a discreet recessed button to the left wall of the receiver’s rear end. Operation of all controls was suitably slick and appropriate to the ground-up design of the rifle, leading to a fully integrated, homogenous feel to the entire gun’s operation.

A folding stock is always useful on a gun of this size and weight. You might not drop out of aeroplanes yourself for a living carrying it, but a car boot is only so big! The locking hinge is utterly solid either open or folded, where it latches to the receiver area so no floppy clanging about. When opened up, the bespoke aluminium design presents complete solidity as a firing platform with the stock offering 14” length of pull (L.O.P.) as standard or adjustable with a spacer system. The cheekpiece is height adjustable for good scope/eye alignment with the action’s bolt sliding rearwards, underneath the radiused polymer comb so never in your face when cycling and ejecting cases from the necessarily long 338 scaled action. This format allows a straight-line path for recoil to the shoulder, the grip effectively hanging below the guns axis rather than within it like an AR15. The grip is in a very vertical position and gives a short reach to the trigger blade, I suspect owners would modify this angle themselves. It’s partly a design `workaround` from the necessary position of the hinge unit that works from a push button to unlatch its full width proportions.

JUST GET ON WITH IT

I was dropped in at the deep end with the rifle, literally being handed a scope at the firing point, mounting it onto the 20MOA Picatinny rail and being told to `go forth` with 300-grain Sellier & Bellot match ammo; Andrew knows me well! I have shot this ammunition before and found it truly effective at long range, well suited to the 1 in 10” twist rate of the barrel. I don’t see the point in shooting 250’s, or having a barrel twist optimised for them when the long range ballistics the Lapua case volume offers are never fully appreciated.

The Minox 5-25 Tactical FFP scope was an early prototype unit that I must get hold of to test; it mounted up easily in some Nightforce rings. It was bore sighted and zeroed in 3-shots on a 100 yard target, the large bullet holes being easy to trace. I took a few shots with the ammo (at £4 a pop, not to be wasted) to check point of impact (POI) shift with the brake on versus an ASE UTRA SL7 moderator, finding less than 1 Minute of Angle (M.O.A.) between them. The recoil feel with the brake on was sharp and fast, a bit like a normal 308 sporting rifle although the noise from most brakes reminds you of how they get rid of the recoil and was loud!

The SL7 altered the recoil to more of a longer, gentle shove that seems to suit the 338 and of course the noise even with ear defenders generated by a brake is not to be sniffed at, the moderator allows a far more pleasant, if less compact firing experience. I never measured the zeroing groups but three overlapping .338 bullet holes is enough to make me happy and the trigger was an absolute belter, single stage and breaking at 21⁄2 lbs with all the superlatives a trigger can warrant. As good as a Jewell!

STRETCH OUT STRAIGHT AWAY

The Joy of WMS is being able to set a gun up in 10 minutes, walk 50 yards and be presented with reactive steel targets from 500 to 750 metres away. Although I shot multiple distances out to 900 metres the following day, this immediate stretch from primary zeroing to longer range is a very good indicator to the simplicity and ease of using the rifle which although present at WMS for a week, hadn’t yet been exercised!

A velocity check over the chrono from this specific barrel allowed a ballpark ballistic calculation to drop three shots onto target before we finished for the day. Andrew adjusted the scope and laid in his estimated windage setting (being his land he knows the terrain and wind patterns well); I lay in behind the gun prone to take the shots.

There is no monopod on the Timberwolf and frankly, I don’t miss it, as I find them slow and cumbersome, so was perfectly happy wedging a soft bean bag under the butt hook. A Harris bipod is supplied with the gun and this simple, yet thoroughly effective support is latched under the forend. The gun felt intuitively comfortable and the trigger feel made up for the vertical grip position and I was totally happy to place 3-shots into a fist-sized blob on the freshly painted fig.11 steel plate at 750 metres, 3 bangs and 3 clangs in the dying evening wind.

The following day I was back out to the ranges to further exercise the Timberwolf’s ability with two novice clients, both experimenting out to 900 metres. To feel totally at ease with the gun from the first shot was relaxing but watching two relatively newbie’s shoot it at varying ranges all day long was reassuring as to my own, often easily biased views. Both found the gun, albeit with wind and elevation calls fed to them, absolute child’s-play to squeeze the accuracy from. The recoil characteristics, which gave virtually zero muzzle lift and no jump at all from the 5500 ft lbs generated were testament, regardless of the firer’s size, to the stock’s design.

Being adjustable from 13 1/8” to 14 1/8” LOP offers great versatility. There is a definite trend amongst cross Atlantic designs for shorter LOP than our Germanic brothers who must have broad shoulders and long necks. Shorter designs also suit shooters who lay more in line with the gun where longer ones encourage more offset of the hips and legs. I personally like an upright head position and found the adjustable comb just a little wide for my complete liking but its inch of vertical adjustment allowed effective comfort, if not my perfect solution. I would customise the shape a little. It says a lot of subtle positive things about a gun when an experienced shooter has started to personalise it for perfection, before he has even realised it’s ticked so many boxes that he wants one.