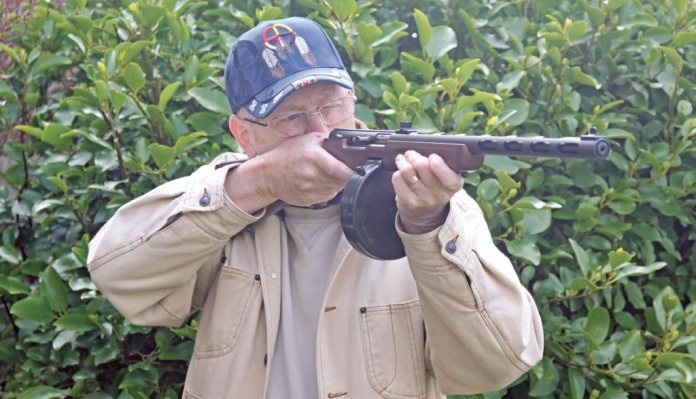 Over the last 12 years or so I have reviewed the vast majority of Italian reproduction firearms for both Gun Mart and Target Sports magazine. I thought that I had covered all of the offerings from Pietta, some more than once, but not for the first time, I was proved wrong. Although it has been available for some time I’ve obviously overlooked this one as it was not in my usual sphere of Western guns.

This little Pietta semiautomatic is based on the Russian PPD sub machine gun (itself a copy of the German Bergmann MP28) and its successor the PPSh-41. Designed in 1934 by Vasily Degtyaryov, the PPD fired from an open bolt and was capable of selective fire. It was chambered for the Tokarev 7.62x25mm pistol round, essentially a Mauser 7.63x25mm. The Russians were obviously into pirating at an early stage! It was officially entered into service with the Russian army in 1935, but manufacturing problems meant that production did not begin in earnest until 1940, after a couple of modifications to the original design.

Because of the expense – most parts were milled – only around 90,000 examples of the PPD were produced before it was superseded by the PPSh- 41. This new model used stamping for many of the parts and could be produced in a little over half the time taken to make its predecessor. Designer Georgi Shpagin incorporated a muzzle compensator into his specification, making his weapon more accurate and controllable than the PPD, and a choice of magazines, 35 round box or 71 round drum was also offered. During the war years production was often speeded up by cutting a Mosin Nagant rifle barrel in half and machining the chambers of the two pieces to take the 7.62mm machine gun cartridge, thus getting two PPSh barrels very quickly.

Many of these weapons were captured by the German army during the war, converted to take the 9mm Parabellum cartridge and renamed the MP-41.

During a production run from 1941 to somewhere in the mid-1950s around six million of these machine guns were made and were used by the Russians to 1960 and by other nationalities until much later.

Stubby, chunky, stocky – all could be used to describe this Pietta. The addition of the vented shroud around the barrel give the illusion that it is shorter than it actually is and when fitted with the drum magazine the proportions seem exaggerated even more. But few, if any, military small arms are designed with appearance in mind and the PPS50, with its military parentage, is no exception. It is difficult to imagine why Pietta chose this particular model to reproduce other than purely as a bit of fun, and in that respect it does not disappoint. Like its Russian ancestor this little rifle is fairly basic with absolutely no frills and would appear to be relatively cheap to manufacture. Whether, like the PPSH-41, it would stand up to the rigours of sustained long-term use is probably doubtful but I see no reason why, with care and attention, it will not give many years of pleasure to today’s shooters.

The one-piece beech stock, fitted with a pair of studs for sling swivels, is very plain but the cut-outs for metalwork are reasonably sharp and precise. The pistol grip is a little thicker than my Ruger 10/22 but affords a comfortable hold, for me at least, with the pad of the trigger finger falling nicely on the trigger without any conscious thought from me. The fore part of the stock has a finger groove running down both sides. All of the metal is finished in matt black, apart from the glossy sights and the ‘white’ bolt, adding to the military appearance. The first thing I noticed was how narrow the metal butt-plate is compared to the stock on to which it is screwed. This is more than just a bad fit, so I have to assume it is intentional as the rest of the wood to metal fit is good.

The sights are about as basic as you can get with the absolute minimum of adjustment (you could possibly tap the rear left or right) and both front and rear are screwed into the barrel shroud, not such a big deal as this gun is not intended for serious target work, although there is a base on top of the receiver should you wish to fit a scope.

The rifle is supplied with a 50 round drum magazine and there is the option of either a 10 round or 30 round stick magazine. Magazine well is immediately in front of the trigger guard and the release lever is inside the guard. It is a simple matter of pushing the lever forward with your trigger finger and the two longer, heavier magazines drop clear without a hitch. The 10 round version occasionally needed a nudge. There is a manual, trigger block safety on the right side of the receiver, easily operated with your right thumb. Forward position is ‘off’ with a red button showing, whilst a white button appears when the rearward ‘on’ position is chosen. The safety can be applied either before or after cocking the rifle. The metal and wood components are held together with one screw in the fore part of the stock and for once I found a screw in a Pietta which did not require a torque wrench to loosen!

Funny how you can pay big bucks for a gun which will perform superbly – if you do your bit – at extreme distances and it creates a few ripples on the range. Then you show up with something relatively cheap and cheerful and everyone wants to try it. The Pietta PPS50 falls into the later class. While there are a lot of ‘black’ rimfire rifles on the market right now, this one just seems to have a bit of character about it with its old fashioned design.

As to be expected, this rifle is not a tack driver but at 25 metres could easily hold a two-inch group, which grew to around 4¼ inches at double that distance. The addition of a scope or red dot would surely improve this.

There were no feed problems with any of the magazines (I only loaded 20 rounds into the drum and longer stick) using CCI ammunition, and the gun operated smoothly throughout. The only issue I found was with the very sharp edges on the lips of the magazines but a few minutes with a needle file would cure this.

Obviously no one had any ideas of winning Olympic medals with this piece, but neither did anyone talk it down or laugh, and it put a smile on a few faces, especially with the obligatory ‘shooting from the hip’ poses adopted by everyone who handled it! Not bad for a sub-£400 gun that should last many years, is cheap to run and easy to maintain. I wonder if we will see these not only on shooting ranges but perhaps, with a little cosmetic modification, among the WWII re-enactor fraternity.