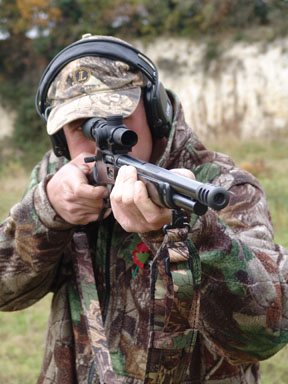 As Riflecraft Ltd is on my doorstep I’m often up there getting work done. On an earlier visit owner (Andrew Evans-Hendrick) showed me a barrel and said with a grin: “what do you think?” It was short and wide with an unfeasibly large hole up the middle and a muzzle brake not unlike a bucket. It turned out to be the tube off a Marlin 1895SS lever-action rifle, which meant it was a 45-70; one of my favourite old timers… “I’m going to call it the Piginator” he said, then I understood that he was building a short and compact wild boar rifle and I have to say the concept really caught my imagination!

I defy anyone not to be impressed – favourably or otherwise when they see this compact little carbine, if not downright horrified, as it looks like it’s going to beat up the firer nearly as much as the target. Andrew, knowing I’m a fan of this big 45 cartridge and know a fair bit about reloading it, asked if I would like to help out. Half an hour later I was on my merry way to the range with the piece in yet another gun bag he will never see again…

In the UK we are well aware of the laws that govern deer hunting – if it’s roe in Scotland or muntjac and Chinese water deer in England/Wales, then you can go as light as a 50-grain 22 centrefire that produces 1000 ft/lbs. Anything bigger requires a minimum of 6mm and 1700/1750 ft/lbs and above. These are the accepted, modern boundaries we must work within!

The 45-70, which is an old black powder cartridge rifle (BPCR) round has never really been in the fold in terms of British hunting. Sure you can load it up in a Ruger No 1 or similar to levels not that far removed from a 458 Win Mag, I’ve been and done that when I was younger – never again. When in Canada my old falling block Browning M78 could hurl a Hornady, 500-grain jacketed soft tip at 1900 fps. Using Sierra Infinity V that gives a spine-shattering 4000 ft/lbs; not bad from a 20” tube. But as can be imagined it’s not pleasant to do so!

However, the old BPCRs of the buffalo hunters were running on blackpowder loads with soft lead bullets and they did their share of killing, as history has shown us. But I doubt if they were making anywhere near 1700 ft/lbs of energy. But a big, 400/500-grain lead bullet the size of your thumb, trundling along at a sedate 1300-1500 fps is probably making 1400 - 1500 ft/lbs, which is well under what’s required for even a roe in England, yet it will kill more efficiently and normally damage less tissue in the process. Essentially they just keep on coming and penetrate with devastating force. I have seen this first hand as a Canadian mate of mine hunted deer with an original Trapdoor Springfield Cavalry carbine. Using a 405-grain flat-nosed lead bullet over 50-grains of BP it was knocking those animals over out to 150 yards with ease.

I am not advocating breaking the law, far from it, but the truth is certain calibres (large and small) do transcend the accepted and in my opinion very limiting boundaries the law imposes on us…

So with the Piginator as we shall see we have a light rifle with a short barrel that has to make 1700 ft/lbs. Easy enough to do, but you need to strike a compromise between what’s acceptable and what’s not in terms of the human frame. You could argue that it’s daft and leaving it at its standard length would take very little from the design and you’d be correct, however, as I was to discover, all things are possible.

I used to own a Marlin 1895SS years ago and they are a good and solid rifle. In terms of the 45-70 cartridge they sit in the middle band when it comes to action strength. Lowest are the original and reproduction BPCRs, such as Pedersoli’s excellent 1874 Sharps, highest are the super strong falling block actions – typified by the Ruger No 1 and Browning M78.

The 1895 has a lot going for it as a pig gun – short and handy even with its full length barrel, a 5-shot capacity and the lever-action allows you to jack another round into the breech nice and quick. The closed topped receiver is drilled and tapped for scope mounts and Marlin includes a hammer spur extension that allows easy manipulation with glass on top. Oddest of all, the action offers a cross bolt safety catch, which as a long time user of lever guns I found very hard to get used to.

To turn the 1895SS into the Piginator merely requires the barrel to be chopped, which entails it being removed. Once off Andrew re-crowned it and threaded it up for a Holland ‘hi-gas’ muzzle brake; an essential item as I discovered. With the stock painted black, I dug out a short range scope in the form of an old Simmons 1.5-5x20 Whitetail Classic. This little compact with its medium Dual-X reticule is still a great performer after years of service and a cheap option too.

Running a tape over the barrel gave a muzzle to chamber length of 15”, butt pad to brake gives this little ‘chug stump mortar’ an overall of 35 ¼”. Weight is around 5-6 lbs and I have to say the whole gun looks brutally cool.

The initial range test was just to get the feel of the Piginator and the only ammo I had to hand was some 400-grain lead flat nose using a medium, BPCR-type load of Vectan TU2000. Recoil was mild and easy and the big slug clocked the chrono at 1250 fps/1400 ft/lbs. Well under deer legal, but from my experience more than enough, however…

To keep it legal I would have to use expanding bullets, which means jacketed and I had two types on hand – Sierra 300, grain JHP and Hornady 350-grain JSP. Both attested to the lack of popularity of the 45-70 in the UK as game gun, as the lead tips were near white with age, proving they had been sitting on the shelf for a long time. Results were interesting and showed that once you move past 200-grains things can be a bit different.

Discounting the 1273 fps load, we have three that make deer legal. All proved reasonably easy to shoot with the 1685fps / 1891 ft/lb recipe being the sharpest in the shoulder. Zeroed at 50 yards all were capable of grouping about 1-1 ½” and at 100 yards would keep it inside 4”. Not amazing but good enough, given the ranges and quarry intended, as long as it’s behind the shoulder and in the K-zone that big bullet will do the rest…

You can push a hard cast, flat-nose lead bullet at around 1500 fps and achieve deer legal too. Interestingly even though heavier, recoil is milder as the softer material offers less resistance in the bore. Frankly if expanding projectiles were not mandatory I would go the heavy lead route.

Now that I have deer-legal loads, it’s time for a bit more experimentation. Hodgdon data indicates that with a 300-grain JHP you can reach 1965 fps with 60-grains of H322. With the 350-grain SP 50-grains of H4198 will make 1934 fps. That’s 2404 and 2805 ft/lbs accordingly, however I would fight shy of these in the Piginator for obvious reasons! I reckon that you could get a bit more out of both bullet weights, without beating yourself up in the process. But we must never confuse power for the sake of it with what is realistically achievable and more importantly practical. As with my old M78 at full power, I could not shoot it prone or sitting and developed a flinch that affected accuracy considerably.

After fine-tuning the ammunition it’s out after deer to see how it performs in the real world, as the red season is still on. Then hopefully boar, where I feel it will prove to be a great little brush gun… So taken by the Piginator concept am I that I have been toying with the idea of getting my Browning BLR Lite in 300WSM piginated. It’s a good rifle but one I never use and offers all the attributes of the Marlin in terms of handling and a back-up shot. I was thinking of chopping the tube to 16” and a Holland brake, then using 220-grain Sierra Game Kings. Well it’s only sitting in the cabinet gathering dust…