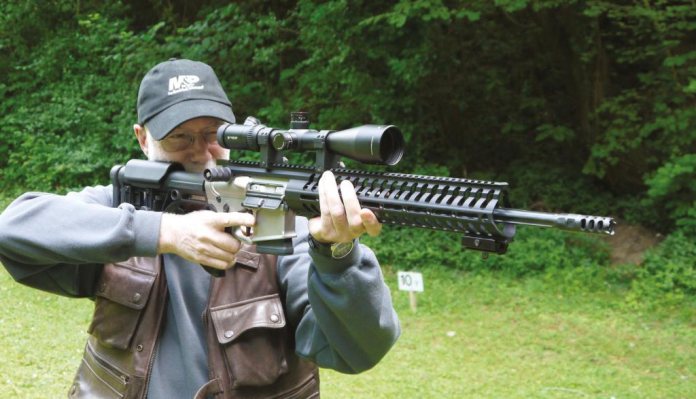 It was August when I tested the Patriot Ordnance Factory (POF) ReVolt, straightpull AR distributed by Neal Parnham at Suffolk Rifle Co. Chambered in 308 Win, this the Heavy version left little to the imagination in terms of build quality, materials and shootability. It also came from the box ready to shoot with a good trigger (POF in-house design), ambidextrous controls and decent furniture. Equally it showed a most practical approach to primary extraction, which can be the bane of hybrids like this as the chamber neck is minutely fluted, which is just enough to literally float the case out on a layer of gas. Frankly I was impressed, though the price at a shade under £3K was a bit scary, but it’s very much what you would expect for this sort of equipment.

However, in the UK 308 ARs are not that common; bigger, heavier with a commensurate increase in recoil they are more about prone shooting than Practical/ Service Rifle use. So what do we want; a 223 Rem Pete that’s what! Correct! POF have this covered as alongside the ReVolt Heavy # PN: 00789 they offer the Light # PN: 00787 version, which is what I have here. Though looking identical the two rifles differ only in size and weight; the Light is 8.2 lbs and 38.5” and the Heavy 9.2 lbs and 40” butt to muzzle. However and saying that the Light when fully bombed and scoped-up feels a handy enough piece!

The spec remains the same with an 18.5” fluted match barrel, nitride-finished with a medium/heavy profile and 3-port muzzle brake as standard. The twist rate is 1-8” so pretty much where it needs to be and it’s stamped up as 5.56 NATO, though will accept 223 Rem too. The ReVolt has always struck me as impressive – the build is 100% with a monolithic free-float forend/ receiver (M-rail) which is M-LOK compatible; so a secure base for optics. Add in the mother of all barrel nuts, which also acts as a heat sink and this interface area is as rigid as you are going to get.

Equally ingenious is the ambidextrous operating handle with roller grips. This X-shaped control sits 1.25” forward of the rear of the receiver and offers good positioning and ease of operation. Neal told me he thought the roller handles were a bit O.T.T. and POF now includes a set of smaller, tapered replacements.

The build is slightly different on the 223 gun, the lower receiver is billet-machined from solid, but the upper looks to be a standard, AR15-style build, though both show a matte silver NP3 finish. Controls are standard AR with the addition of ambi mag, safety and bolt releases; this last sits on the right of the mag well above the mag button. Inside the trigger guard is a second manual hold open catch, which is a nice touch. The positioning of the operating handles allows for a case deflector and ejection port cover to remain, the former making it a good bet for lefties too!

The bolt is fairly standard AR though shows a roller on the cam follower, which should make for smoother operation. Unusually the bolt head is sprung, which to a degree probably helps primary extraction. The trigger is a pak system with the whole thing dropping in en-bloc where it’s retained by KNS anti-walk pins. The break is a quoted 4 lbs and offers crisp and clean operation, unusual is the shape of the blade, which angles forward with a small curved pad position at the end. POF call it an Enhanced Finger Placement and it does just that by putting the pad of your GO FINGER exactly where it needs to be every time! As an aside POF offers this unit and a standard curved blade as after market drop ins, which I am in the process of testing.

As I said this is one well made and envisaged rifle and even before pulling the trigger I kinda’ knew it would be a shooter! For me the most impressive aspect of the ReVolt is how they have solved primary extraction. Let me explain; any hybrid straight-pull is in essence a semi-auto built without an operating system. On a gas or piston gun the speed of the bolt head rotating tends to break even the most over pressure case out of the chamber. However, manual operation is a lot slower and does not offer so much effort to do the job. OK if you have ammo that does not generate high pressures, but if it does you’re in trouble as the bolt will literally seize giving hard operation.

In the UK we have developed large, sidecocking handles to overcome this and it works most of the time. POF’s solution was to lightly flute just the chamber neck, which allows a portion of gas to ‘wash’ back between the brass and chamber and perhaps impart some thrust to the shoulder too. Combine this with the large cocking handles and it’s pretty much ammo-proof; they call it the E2 Dual Extraction Technology Chamber and it certainly worked with the 308 ReVolt Heavy I tested.

Something else I noted had changed was the forward receiver pin. On the Heavy this item is staked in place so you cannot swap the upper and lower around on other guns. This has been done to satisfy the fact the ReVolt is built as a mann-opp to confirm with firearms laws in certain US states. We have other problems in the UK and that is not one of them as the pin on the Light slides out so allowing a full strip down!

Furniture consists of a Magpul grip, which is a nice hand-filling design with a good deal of back strap to improve the hand/finger positioning. The butt is as before a Luth-AR, MBA-1, which is a more cost effective and lighter version of the big Magpul PRS design. It offers adjustable length of pull and comb/cheek piece with a nice club foot under shape that gives a superb gripping hook. I’m pimping up my A2 Speedmaster to improve shootability and the MBA-1 is on my list!

I fitted a Vortex Viper PST 4-16x50 in a set of high 30mm AIM Sports rings and a Harris-type bipod. Ammo consisted of - PPU 55-grain FMJ, Remington 55-grain SP, GECO 56-grain Express (ballistic tip hollow point), and Fiocchi 69-grain Match King BTHP and a reload; 69-grain Sierra MKT (Match King Tipped) over 24-grains of Ram Shot TAC. Hornady filled out the rest with their TAP range - 60-grain Urban, 62-grain Barrier and 75-grain FPD. Pleasingly the 1-8” twist barrel shot the lot, making it a very flexible twist rate, with the lighter weights ideal for either economic plinking with FMJ or vermin and small deer with the soft point or ballistic tip options. Leaving the heavier 60-grain + loads for more longer range and target use, though saying that they also do double duty for deer/vermin.

The 18.5” barrel will rob a tad of velocity over a more standard 20” tube, say around 100 fps, but not a lot when compared to a 16”, which seems to be the most popular amongst UK AR15 shooters. At 100m supported off a shooting bench most loads kept it sub - 3/4” though the 75-grain TAP was turning in some cool ½” groups as was my reload.

The Light was a pleasure to use, though saying that the muzzle break is a real blaster and care and consideration should be given to other range users as it has a signature that could only be described as in your face! The rifle cycled smoothly and faultlessly with all loads tested showing no issues with primary extraction. OK a modern side-cocking AR in 223 is pretty reliable in this department given the right ammo, but the ReVolt was just a tad slicker across the board.

The extra controls gave greater appeal too, I have never been one for ambi switches on an AR but they do have their place. What I especially liked was the right side bolt release above the mag button, which is so much more instinctive to use and at times the secondary mag button paid dividends too. I get the feeling I will be getting one of those for my Speedmaster! The Light comes with 1 x 10-round Magpul P-Mag and the new smaller cocking handle buttons and as I said at the beginning I was seriously impressed. OK not that cheap, though cheaper than the Heavy/308 version but a rifle that needs nothing apart from a scope, mounts and ammo!