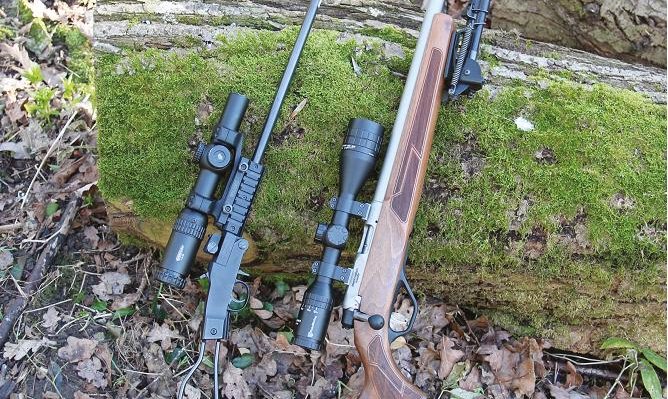 Now, you are either going to love the look of this gun or you are going to be sick over the pages of your new copy of Shooting Sports Mag! Hopefully not the latter! Readers, I bring you the Chiappa Little Badger survival rifle!

The build uses a basic, break-barrel, single shot system and is available in 22 Long Rifle (LR), .22 Winchester Magnum Rifle (WMR) and 9mm Flobert. This last is a full brass shotgun cartridge designed for the old garden guns that were so popular many years ago. What good it is today remains to be seen, but perhaps for short range pest control on rats and similar it might be just the ticket! Just to confuse you, this version is called the Little Squirrel and shows an 18.5” smooth bored barrel. Chiappa’s website shows the rifled Badger available in both 16.5” and 18.5” lengths, the former is probably all that’s required for a 22 LR though the latter would suit the more powerful 22 WMR better! It also shows the Double Badger, which is an over & under double rifle with a more traditional wood stock.

On test is the 22 LR version, probably the best choice of calibre! It’s incredibly light, weighing in at just under 3lbs or 1.33kg and can fold up for storage or discreet carriage into half its length. Chiappa includes a protective nylon bag/backpack that it drops into. It’s plain to see the Little Badger is not really built for looks or comfort, but in many ways is still a practical design, if you like to keep things minimalistic. There are actually some European air forces that have them as a part of the aircrew survival kit, should they be downed and put in a situation where they have to live off the land until rescued.

So, let’s start at the back; the butt is just a simple, metal, wire frame attached to a moulded polymer pad. Incorporated in to this skeleton stock is a cartridge holder with a capacity of 12-rounds of 22 LR (six per side). This is both handy and convenient and makes loading easy, as you just reach in and pluck them out, far better than fumbling around in your pocket!

The butt is far from comfortable as can be seen, however, if you Google the Little Badger, some of the images that come up show owners have wrapped the butt with paracord, which I think is a great idea, as this is after all a survival rifle. Not only does it offer a decent length of tough cordage; always a useful item to have with you out in the field, it also gives the shooter a little more comfort for the cheek, especially in cold conditions.

The action looks to be a Mazak (zinc alloy) extrusion, Chiappa specialises in using this material for a lot of their rimfire guns. It feels good and solid yet is minimalistic, as perhaps suits a gun of this type. At the rear of the trigger guard is an inch or so of Picatinny rail, to which you can add a pistol grip as an optional extra. This takes the form of a hollow tube with a screw-in end cap, so that you can house cleaning or small survival kits.

To be honest, it does not do much for the rifle’s looks or ergonomics!

The trigger broke nicely at around 4.5lbs on my gauge, which I thought was good for what is a cheap rifle. The external hammer shows a wide and slotted thumb spur to aid cocking, which is an easy business with it locking back positively.

I’ve used the Badger in wet and snowy conditions whilst wearing gloves and have had no problems at all. The open sights appear to have been taken from Chiappa’s .22 semi-auto M1 Carbine reproduction. The rear uses an aperture that runs up and down an angled block for elevation, with a thumb wheel on the right for windage correction. The front is a one-piece moulding with a fixed blade in a rabbit ear protector. To be honest, a truglow fibre optic up front would have been a better idea, especially for low light conditions!

In front of the trigger guard is a small lever that you pull to break open the rifle for loading and folding it down for storage. It will fold until the base of the trigger guard hits the underside of the forend and at 16.5” (stowed) it makes handy package to carry. The hinge system appears solid with no side float and it opens and closes positively. As can be imagined, loading is very simple! With the action open, just slide a round into the chamber, snap the barrel closed and you are ready; then cock the hammer when you want to shoot. Taking simplicity perhaps a bit too far; the Badger does not have a manual safety catch. Their website says: ‘the safety is automatic so when the hammer is not cocked, the trigger is automatically blocked’. What this means is that the mechanism has a half cock feature, as you squeeze the opening lever the hammer is moved back about 1/8” where it locks, requiring it to be thumbed back manually to fire position (full cock). With a round up the spout this then also offers a safe carry position, which is comforting! Reloading is just a matter of opening the action, where the extract-only ejector will raise the empty case from the chamber, so it can be removed with your fingers

Now let’s talk about the part of the rifle that most likely to have caught your eye - the Picatinny quad rail! Kind of ‘tacticool’ on a gun like this I’d say, but never the less very practical! It’s all-polymer to keep the weight down and gives you enough room to fit accessories should you feel that way inclined. A small optic of some description like a red dot sight or a compact, low power scope definitely wouldn’t go a miss on the Little Badger, especially if you are using it as a hunting gun or even just for range work.

The barrel is carbon steel and the muzzle threaded ½ x 20” UNEF for a moderator! A plastic thread protector is supplied, but to be honest, it’s not great and as I discovered it’s glued on and just pulls off! I’ve actually lost mine and may have even shot it off when it worked loose! I run mine with a small muzzle break now mainly just to act as a thread protector.

DOES IT HIT THE MARK?

Accuracy was acceptable with open sights, but obviously would be better with a scope set up. Using sub-sonics and high velocity it was shooting 2-3” with the iron sights at 50-yards, which was OK but not amazing. Though with the set up on offer I was not expecting miracles. However, I also fitted a moderator and an optic. The compact nature of the build also dictates a few parameters for scope mounting. You will need reasonably high rings so the eyepiece bell can clear the rear sight assembly, also to allow you to cock the hammer underneath. I found a reach-forward design is best as it moves the scope forward so increasing eye relief and offering a better head/eye position. Shot again at 50-yards from a rested position, groups shrank to around 1-2”, enough to shoot rabbits etc with, but I would also consider that its maximum, effective range! Standing or generally unsupported I found it quite a challenging rifle to shoot because the thing is so light it seems to ‘feel’ every heart beat! A fact not helped by the lack of proper forward hand position; for that read on the barrel and the skinny wire stock. This showed in the lack of group consistency as can be seen; but it is what it is and it sort of grows on you!

A great little fun rifle for the range, something a little different you could say but it will definitely turn some heads! Also, it’s good enough for hunting small game at sensible distances and is super light weight when out in the field. Great value at under £200!
Safe shooting! – Rack