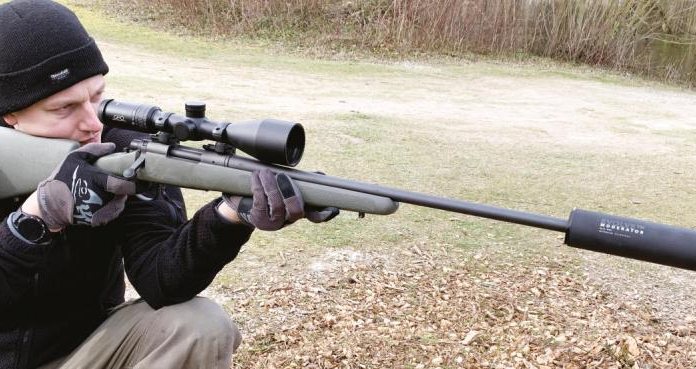 Confusion reigns, as I thought that the Remington 700 ADL that importers RayTrade UK sent me came wearing a McMillan A3 Sporter stock, as until that moment I had never heard of Mc3 (pronounced Mc Cubed). Closer inspection of the grip cap showed the Mc3 logo and the name TPIM Stocks, which got me even more confused, Remington’s website does not show any such model, despite how I searched it. More investigation showed that they are a new generation of highperformance rifle stocks designed, engineered and manufactured by McMillan to be ‘Exponentially Better?’ RayTrade imports Mc3 products, so I guess they mated it with the 700 to produce what I found to be a most practical combination of a modern classic rifle with up to date technology and design.

This review is going to be a fair bit about the stock, as it’s quite special, as well as the tried and tested Remy 700, we all know and love; so, please bear with me. Visually, the Mc3 Tradition looks a bit like McMillan’s A3 Sporter model, but as opposed to fibreglass, it’s made from a polymer called Xenolite. Google showed it was created by DuPont in 1991 and was the world’s first lightweight, multi-element, composite, X-ray protection material, designed to replace lead-vinyl, while offering a 30% weight reduction. Its original deployment would seem a far cry from using it for a rifles stock, but many materials seem to do double if not treble duty these days, for many and diverse uses.

So, for a name like McMillan that’s synonymous with hand-laid fibreglass and quality stocks, to enter what many perceive as a market littered with horrible, flexible, cheap and noisy plastic furniture; was a bold move indeed. It could have done their rep no good at all, as it may take 30 years to build a brand, but only 30 minutes to ruin a lot of hard work. Before researching Mc3, my first impression was, they were letting standards drop considerably, which is not uncommon in this day and age in many industries; cut a bit here, shave a bit there, you know the score?

Should have known better

Taking the Tradition off the action for the first time, I was expecting the usual hollow, braced forend and noisy butt void. But no. This is a near 100% rigid, one-piece moulding with integral aluminium pillars. Apparently, where other manufacturers build this style using Nylon 6 or 66, rubber or Polypropylene, this is the first time Xenolite has been used and it’s a revelation. It’s not heavy but is rock solid, which could mean a new generation of lightweight, affordable and quality stocks.

The Tradition is available in tan or olive, with options on camo to special order. Mine came in olive, which looks good. The build shows the classic A3-type deep, highcombed butt, and the large and set back, near vertical pistol grip. The slightly tapered, 1.75” forend is more rounded, but still hand filling and grip is enhanced by textured panels in the usual places. There are two QD sling studs up front with provision to screw a third in and one at the rear. The forend channel is wide enough to accommodate Varmint-type profiles, with a lot of clearance on a standard tube. Overall length is 30.75”. If you want it tactical, then there’s the Legend, which is configured similar to McMillan’s A5 handle. Both models offer a carbon fibre option that drops 4-5oz off the weight.

Length of pull (LOP) is 13.5” on the Tradition, which is a tad short for me, which includes a ¼” spacer and a 1”, Pachmayr Decelerator recoil pad. Mc3 offer a 6-spacer LOP set and a box mag conversion kit with a 10-round MTD polymer magazine. The latter needs inletting into the stock. RayTrade told me that both items will be on the next shipment, prices to be confirmed. First impressions of the rifle is that it’s not that heavy as the Tradition stocks weighs 2.93 lbs, 8oz lighter than my Bergara B14 HMR unit, which is similar to their A5 design.

Right, let’s recap on the 700. The ADL (Average Deluxe) is very much the entry level model, with a phosphate/matte finish. They come with a blind box magazine (top loading and unloading only). The test ADL has the Tradition stock and a floor plate system. Regardless of that, it’s no different in mechanical build to the more cosmetic BDL (Better Deluxe) version, strange way of describing a rifle! This model is known for its three rings of steel build, with a recessed bolt face that supports the case head, surrounded by the barrel extension that screws into the receiver.

The twin lug bolt locks into abutments in the chamber extension and shows the signature, large diameter round body and a swept back handle with a flattened knob. Ejection uses a sprung plunger and extraction by Remington’s unique clip system. The shroud has a cocked action indicator stud that protrudes from the rear, the safety is a 2-position, rolling lever set rear right and pushes forward to FIRE and reverses for SAFE, in this mode you still have bolt operation. Typically, it’s well placed for operation and hardly breaks your shooting grip at all.

The trigger on my example did not have the external adjustability of later models. It broke at an overly firm, yet crisp 5 lbs, which was not conducive to good performance. Breaking the action out of the stock showed a small, weight adjuster screw at the front of the trigger mech under a dollop of sealant. A quick twiddle with an Allen key and I had it down to something a lot more agreeable at around 2-3 lbs and ideal for hunting. After adjustment, I reckon the feel is much better than the later X-Mark unit. The blade is reasonably wide and nicely curved. Inside the guard is a small, push-up plate for bolt removal. A slotted catch set in the front bow allows you to pop the floor plate for fast unloading.

The rifle came wearing a standard, sporter weight 24” barrel, which I really appreciated, as too many companies these days feel 22” is more than enough in even the heavier calibres. OK this one was in 308 Win, so 22”would have been fine. Remington shows the 308, 700 ADL Synthetic (which less the Mc3 stock is what the test rifle is) as having a 1-10” twist rate, which makes it pretty tolerant of most common bullet weights. The form is not the 5R they use on their more prestigious models, but the standard, opposed land & groove type. Capacity is 4+1. Nothing radical, but from my experience; a well built and solid workhorse of a long gun, that could be easily upgraded, given the amount of aftermarket accessories available today.

Raytrade supplied an Evolve, reflex moderator (14x1mm) and a German Precision Optics (GPO) Evolve 4X, 3-12x56 SFP scope with #4-type reticle, I added a Harris BRS bipod. Ammo went to Remington 165-grain Premier AccuTip boat tail and 150-grain Core-Lokt PSP and Barnes non-lead, VOR-TX, 130 Tipped TSX BT and 150-grain TTSX BT loadings. The rifle came pre-fitted with a set of Weaver bases. Although not light, the 700/Mc3 package, even when fully bombed up and fettled is not as heavy as it might appear.

The stock, although looking a bit ‘targety’, actually comes up and mounts handily, the high comb put my head/eye easily online with the scope, which I fitted in low QD mounts. Although I would have liked more LOP, the pistol grip shape and position places the trigger finger for a comfortable, first pad hold. I did find it a little wide, but it fills the hand well. What comes across immediately in a tactile sense is the superior feel of the Mc3 Tradition stock, sort of hunting meets target. One aspect I really appreciated, was that deep butt pad, really positions the rifle properly in the shoulder and also spreads the recoil force better than a shorter sporter-style.

As nearly all my rifles are detachable mag-fed these days, getting my head round a top loader again was different. If I were to buy this rifle, I’d definitely get a mag conversion, probably the one from Mc3! Recoil effect for a 308 was good and the rigidity of the stock most apparent when shooting off the bench, as it’s very solid. General performance was also good with the average group going to around 0.75” and much to my surprise the 150-grain Barnes brings it in a bit tighter. However, their 130 load was not all that, hardly surprising given its light weight and the rifling twist rate. However, both of these were near bang on quoted velocity.

The Remington 700 has always been a decent rifle in terms of design and potential and this 24” 308 is no different. Interestingly, comparing the Barnes data when shot in a 22” Bergara B14, shows the shorter barrel added 20-30 fps, go figure. What really makes this version for me is undeniably the Mc3 stock; solid, rigid and eminently shootable.