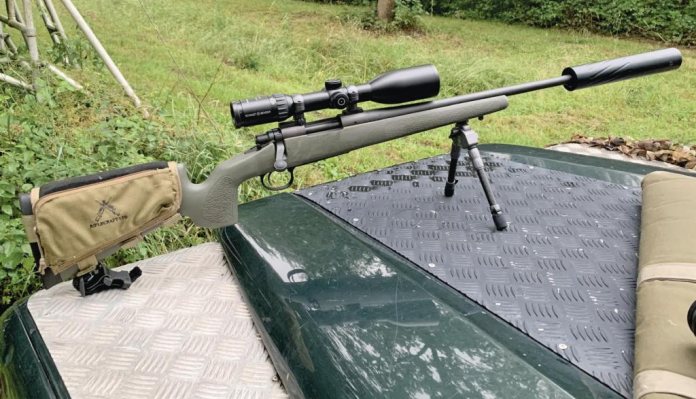 A while back I did a gun test on a Remington 700, it was a standard ADL chambered in .308 Win showing a 24” hunting weight barrel with 1:10” twist. However, it was fitted an Mc3 Tradition stock which is made by McMillan, but as a separate brand, and from a polymer called Xenolite. Created by DuPont in 1991, it was the world’s first lightweight, multi-element, composite, X-ray protection material, designed to replace leadvinyl, while offering a 30% weight reduction.

It would seem a far cry from using it for rifle furniture, but it’s one of the better designs I’ve seen, mainly due to Xenolite’s sheer stability. Its visually similar to McMillan’s A3 Sporter model, with a deep butt and larger, angled down and back pistol grip. The material is solid, unlike a lot of modern plastic stocks with hollow voids in the butt and lighter than comparable designs. Plus, it comes pillar-bedded as standard. I was not looking for another 700, although I had been considering building a .308, as I had not owned one since my beloved Riflecraft Light Sporting Rifle (LSR) bit the dust when I shot the barrel out.

It was the Mc3 that clinched the deal for me, as it was so shootable, blending a deal of target feel, field handling and practicality into a proven if older design. I thought I’d speak to Andrew about getting an LSR, which is funny as he had already clocked the possibilities of the Mc3 package from RayTrade and used it to make what he calls LSR2.

The LSR was Andrew’s idea back in 2000. Ever a fan of the Remington 700, he took a standard rifle like the ADL, binning the cheap plastic stock and replacing it, in this case with an HS Precision Kevlar type, suitably pillar-bedded, along with a muzzle re-crown and some trigger adjustment. He also checks the engagement of the locking lugs to see if they pull true, if not they were corrected (blueprinting). Feed was the factory top-loading, integral, floor plate system.

I remember picking up mine and after barrel run-in plus 100+ rounds it was capable of printing ½” groups @ 100 yards until it got too hot; usually 8-shots. But it was a hunter, so no problems and I was over the moon. Today the build has moved on a little, as it’s now fitted with the Legacy Sports detachable box mag (DM) bottom metal (well plastic).

For my LSR2 I stayed with the floor plate system as, and although the DM does the job, it has two weak areas: first – the release catch is at the front of the mag well and totally unprotected, so it is easy to accidentally operate. Second - if like me, you torque down the action screws you run the risk of splitting the rear screw hole in the bottom metal. I don’t like top-loaders and will sort out a DM package, but it won’t be the Legacy!

The inlet on the Mc3 stock is precise and initially, I did not think it needed synthetic bedding. Speaking to Andrew about it got this reply: ‘if it shoots well now, it will shoot better afterwards’, my ‘sensei’ had spoken! Originally I wanted a short barrel (maybe sub-20”), as .308 is quite forgiving on barrel length. Discussing it, he said: ‘your original LSR was a 22” plus it shot well and gave good figures, my hunting .308 is also 22’ so if it ain’t broke don’t fix it. One anomaly with the Mc3’s Xenolite is normal bedding compounds do not adhere to it well. Research showed that WURTH’s ‘Replast Easy Plastics Adhesive Universal’ does the job a treat.

I had the muzzle threaded ½ x 20 UNF, not my favourite, but I had a Hardy Gen III reflex moddy with their integral brake up front, which I do rate for effective noise suppression and recoil reduction. Now to the ‘Go SWITCH’. Since its inception, the Remy 700 has worn their Walker trigger and if you knew what you were doing you could tweak it into something very useable.

However, Remington changed this to what they call the X-Mark Pro externally adjustable. Sounds good, but I never found it could be set up as well as a Walker or give the same finesse. Plus, the single adjusting screw that just controls weight sits inside the top of the trigger blade curve, which can dig into the top of your finger on firing. My new 700 happily does not have this, instead, there is a screw in the front face of the trigger block that does the same thing. Again, it’s weight only, but can be wound down to something useable with none of the Pro’s issues with the screw in the blade. It’s not perfect, but I’m happy with it and it’s easing in nicely.

My initial thoughts on the LSR2 was; ‘keep it simple stupid’, hence the original floor plate magazine, well that’s going to go in favour of a DM (to be decided). Equally, my views on short barrels for .308s, as the 22” tube makes more sense. One thing that I did stay retro on was the old, steel Leupold, swing-off scope mounts. The front base has a transverse slot machined in the top, and its corresponding ring a compatible lug. The rear base is flat-topped with left and right cup head screws either side, the ring here is flat-based with concave cut-outs on either side that matches the screw head dimensions.

To mount, remove one of the rear screws, place the scope/ring in the front base at 90º to the receiver and swing it into the rifle so it stops on the rear screw. It’s best to use a spanner to rotate the ring and not the scope as a lever. Once in, insert the second screw, which will allow you by screwing in and out on both to align and clamp it with the action. Compared to more modern mounts fiddlier, but scores well in being ‘bomb-proof’ when set up correctly.

As to glass, my thinking was again retro. My original LSR wore a 1” Leupold 3-9x50 VX1 with fine, Dual-X reticle. You may laugh, but back then that was state of the art and it did very well, allowing me to accurately shoot out to 350 yards. The Leupold is on another rifle, but my second choice was again old school, a Kahles 3-10x50 CT (again 1”) with Mil-Dot reticle. It’s another classic design with a spec good enough for stalking, as it’s light and compact so gun handling is improved!

The LSR1 had a Harris BRS (Bench Rest Swivel) bipod fitted from day one and is probably the best general design available, even today. However, saving weight was also my goal and the BRS puts a chunk of bulk up front. Instead, I went for the Spartan Pro Hunt Javelin detachable model. It fits into a socket and is held by magnets, so only goes on when required and is seriously light due to its primarily carbon fibre build. When Andrew bedded the stock I gave him Spartan’s Gunsmith Adaptor to bond into the forend. The Pro Hunt has lengthadjustable legs, full cant plus swivel facility and lives in my pocket until needed.

So ready to rock and roll, first barrel break-in; shoot one clean one for 20-rounds etc. I feel it helps, as no tube reaches its full potential until it’s had at least 100-rounds + through it. Reloading was my aim as the LSR1 shot most things, but loved 168-grain Hornaday A-MAX over some Vit N140. Sadly, that’s not an option as A-MAX is now classed as a target bullet so not deer legal. But it seemed to work at the time, guess no one told the deer.

So apart from the to be announced DM magazine system my LSR2 has lived up to all my expectations. I once again have that most cherished of hunting machines; a ‘go-to rifle’ result! My thanks to Andrew at Riflecraft for recreating history.