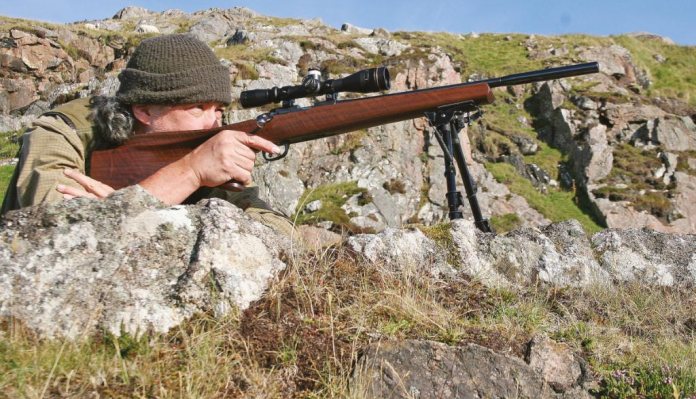 I use an old Sako Finnfi re as my go to 22 Rimfire vermin gun, yes it’s a bit modified and re-stocked but that`s a good thing, it shows that Sako go it right the first time with this gem of a 22 Long Rifle and it is worth customising. It’s a keeper!

It was introduced in 1996 as the successor for the hugely popular Finnscout Model 78 rimfi re. The new Finnfi re differed in that many of the all steel components of the Finnscout were substituted for more economical plastic. Instead of detracting from its appeal it was soon snapped up by pest controllers and vermin shooters worldwide, where the use of plastics for the trigger guard and magazine made sense, with less worry of corrosion and better functioning.

Originally, there was only the Hunter, which wore a decent, walnut sporter stock and made for a lightweight rabbit gun. The same Sako quality was put into the barrel and action and soon the little Finnfi re’s reliability made it highly desirable tool. A larger Varmint model followed, with a fuller stock design to accommodate the heavy and longer profile barrel and finally a target model called the Range concluded the inventory.

The Varmint was in my view the better rifle. It sported a better designed stock and a heavier and accurate barrel and proved very popular. The Range is very hard to find these days and a little bit specialised, nice gun, but maybe a bit OTT. I am playing around with a Varmint at the moment, with Jewell trigger and bench rest stock for some extreme range 22 rimfire shooting!

The Finnfire was certainly a premium quality rimfire, fashioned after Sako’s, centrefire Model 75 series without any compromise of quality or components. Indeed, it shared many the same items. The trigger unit was fully adjustable and featured a travel-free, single stage pull and was exactly the same as that from their TRG-S. The same is true of the safety catch that has the same sliding lever that locks the bolt shut.

The barrels are all cold, hammer-forged with a 1 in 16 ¼” twist rate, the Hunter was 22” with the Varmint and Range at 24”and designed to handle standard .22 Long Rifle ammo, except some of the specialised 60-grain items. Sako only factory threaded the barrels for moderators towards the end of production, so scrutinise the threading job on early models for quality.

The barrel is a push fit in the action and is retained by twin cross bolts. This allows the headspace to be altered easily and a quick swap if desired. The bolt has two locking lugs at the rear and a low 50° lift angle that enhances its smooth travel. On the rear of the shroud is a cocked action indicator to let you know the rifle is ready to go.

The magazine and combined floor plate/ trigger guard are all plastic, which is fine, as they resist corrosion better. The magazine is a detachable single column unit available in 5 or 10-shot options, but users soon found the ten functioned better with only nine rounds. Also look at the ejector mechanism, as this is a small sprung steel wire to the left of the action on the inner bolt rail. If damaged, this too can cause less than perfect operation.

Stock options were always in walnut, with the Hunter wearing a slim line sporter profile, whilst the Varmint model differs with a wide beaver tail forend and rubber recoil pad. The Range, as its name suggests, is a targetorientated design with adjustable cheek piece, but many have found their way onto the game fields as the ultimate longer range, 22 vermin rifles. Of all models, the Varmint is perhaps the most sought after and now commands high prices, as owners usually keep hold of them!

The barrel also is easily removed and secured by two cross bolts, as mentioned, which I prefer to the SAKO Quad system, as it feels far more secure. Because it’s removable, many aftermarket tubes are available, so check you have an original Sako, although if you have a Lilja from the USA this is a premium item and a keeper! Regardless of specifications and the various lengths and dimensions of the barrel, all models of Finnfire are prized for their accuracy potential.

Sight-wise, only the Hunter model had the usual, basic open sights, but most were removed in favour of a scope fitted to the integral dovetail rails. The 10-shot magazine is also the most sought after feed unit, but they are rare and cost the earth. The weight, as you would expect, was light with the Hunter weighing 5.25lbs, the Varmint was 7.25 lbs and Range 7.5lbs.

Overall length was trim too at 39.5” for the Hunter and 40.5” for the Varmint and Range models alike. Importers are GMK Ltd. and they still bring in the later Sako Quad, switch barrel and newer Finnfi re 2, which is not the same beast, so originals are a second-hand option only. Expect to pay £375 for the Hunter, £500 for the Varmint and £600 plus for a good Range version.

Because Finnfi res were so highly regarded, they were often customised, I have a Venom Arms switch barrel 22 LR and 17 Mach 2. The Venom boys sourced Lothar Walther .17 Mach 2 Match barrels that are superbly accurate and available in stainless or chrome molly steels. What you then have is a super little rifl e that converts between calibres in seconds and shares the same excellent Sako action as well as magazine and requires no special tools to shoot 0.25” at 50 yards. They also made a similar replacement for Ruger’s M77/22 too, as that too has an easy barrel change.

The only really weak point of any Finnfire is the ejector, as mentioned. It can be damaged if you poke around in there trying to clean out muck, so take care; other than that, pretty bomb-proof really. If you’re lucky enough to get one, you will probably begin to rely on it as much as I do for my rimfire vermin duties.