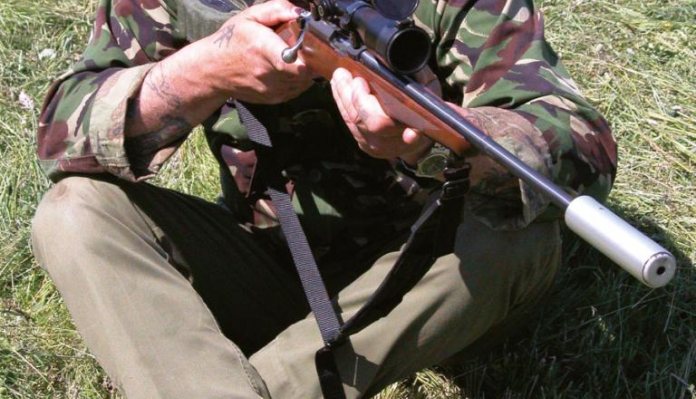 Ruger, I think, were one of the last big US manufacturers to go down the budget rifle route in both centrefire and rimfire options, with their American series. Compared to their classic M77 range, they make more use of polymers and alloys and have totally different bolt-action designs and feed from box magazines. Nothing wrong with that as they are still shooters but at a ‘nicer price’.

Before their introduction; Ruger’s M77 series was built around a similar, Mauser 98-style action and layout, albeit larger or smaller for centrefire and rimfire needs. So, you had one familiar design offering the same options and materials, safety catch placement and bolt style and even dedicated scope mounting. I’ve owned and shot the brand for years and my first gun was their 22 Long Rifle (22LR) M77/22 Deluxe, with some very nice chequered Walnut furniture.

Options included the standard weight, 20” barrel with or without iron sights, in a choice of wood or polymer furniture. More up-market but identical, was the All-Weather, with a heavier, stainless barrelled action (24”) and laminate stock. Calibres, then included 22LR, 22WMR, 17HMR, 17MACH2 and 22 Hornet. Feed was from their standard rotary box mag; 10-rounds in 22LR/Mach2, nine in the Magnums and six in Hornet. They all used the same length receiver and mid-locking bolt, the only difference being the magazine lengths position, given the calibre.

Today, turning to their website shows that the 77/22 range offers only 22 Hornet, so 22LR, 22WMR and MACH2 have gone. Likewise, the 77/17, no HMR anymore, but 17 Hornet and 17WSM. The more standard/ original numbers are now taken up within the American Rimfire series. I guess it makes sense, as the last time I looked you’d be paying at least £1000 for a new example of any M77 rimfire, more for the All-Weather options. So, very much the passing of an era, as build quality of the M77 rimfire series was excellent; sticking my neck out here, I’d maybe say approaching that of Anschutz’s rimfires. And as I have said before; configured like a fullbore in terms of handling, feel and dimensions. Along with my 77/22, I also have a 77/17 All-Weather (17HMR), both it and the 22LR have accounted for a lot of rabbits, hares and also a number of foxes.

I honestly can’t remember when I got the 77/22, but I reckon very early 2000s. Although not a fan of wooden stocks on centrefire rifles, I have no such issues on rimfires and the timber on the Ruger still is of good quality, nicely chequered and with a decent rubber butt pad. The comb was a tad low and I normally use an Eagle butt bag, as it not only raises that position for better head/scope alignment, but also offers a zipper pouch on the right, which takes two or three spare mags easily.

Moving forward, the all- steel action shows the integral bases that Ruger’s dedicated rings bolt on to, unusually there’s three; two on the extended rear bridge and one up front. They come in low, medium and high and include a lug underneath that engages with a cut out in the base for added security and return to zero if removed. Given the scope’s objective diameter, sometimes an X-TRA HIGH would be useful, but Ruger don’t offer one. However, you can get a Picatinny rail that clamps on, I think from Warne. Unlike their centrefires that have stepped receivers’ bridges, so need two different ring heights, the rimfires are flat. Rifles used to come with a set of medium 1” as standard. The safety is a 3-position lever, rear/right of the action and gives: forward FIRE, middle SAFE with bolt operation and rear SAFE bolt locked. From the box, the trigger is OK but nothing special and usually a bit firm in operation. On both my Rugers I fitted the Rifle Basix replacements, which was a real improvement.

Unlike most 22 bolt-actions, the Ruger locks in the middle of the receiver by twin lugs. The bolt face shows twin extractors with the classic, fixed ejector blade behind the magazine and it works. Feed is from almost the same, 10-shot rotary magazine as their 10/22 semi-auto rifle, the only difference being the shape of the base plate, the 10/22s is curved and the 77/22 is flat, but they are interchangeable. The release catch is a flush-fit plate at the rear of the well. The standard weight barrel is bare backed and 20” long, perhaps a bit much for a 22LR and I’ve always meant to get mine cut back to 16” but have never got around to it. Perhaps because it shoots so well, and I don’t want to jinx it! Like the 10/22, it’s retained by a chevron block and two Allen bolts and is easy to remove. Not that you need too, though saying that, I was sent a 17MACH2 custom tube from Venom many years ago and it dropped straight in. The only thing I had to do was open up the forend channel, as it was a bit fatter than the standard barrel.

Overall, a nice and rather classy US rimfire bolt-action, bolt and safety catch operation is excellent, and it cycles easily, mag changes can be bit fiddly. On that point, older magazines can get a bit spring worn but can be easily re-tensioned; South Yorkshire Shooting Supplies offers a kit. I favour Winchester’s 42-grain MAX sub-sonic ammo for all my hunting and my old 77/22 can shoot ½” @ 50-yards and an inch at 100 easily. So, no problem on head shots at the longer distance. If you want more firepower, then Ruger offers their BX 15 and 25 round banana clips in both 22LR and Magnum lengths.

Any quality rimfire bolt-action seems to be able to go on for ever and requires little maintenance and the 77/22 is no exception. Trailing through the gun buyer/seller websites shows prices from around £250 up to £650, given the version and what sellers are asking. If you like your 22LRs a bit classic and capable of offering great performance, even in second-hand versions, then check out Ruger’s M77/22. Although out of print, they are to be regularly found on selling sites and also gun shops in the second-hand racks.