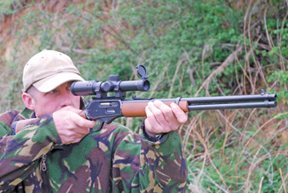 I like lever-action rifles and have two – a Browning BLR in 300 WSM and a Winchester 1895 in 30-06, both of which I use for hunting. However, in the UK this sort of gun is mainly bought as a Gallery Rifle and usually chambered in 357 or 44 Magnum. Regardless of calibre the idea is for a compact and fast handling design that you can load as you go thanks to its tube magazine.

However, in other countries these features convert readily to a hunting gun and though 44 Magnum makes a nice brush buster for feral pig and the like, that all-time US favourite the 30-30 Winchester gives the gun some legs for deer too. I have had mixed success with 30-30 and found in a lever- action that the rimmed case design is not super accurate! However, in my old Thompson Centre, single shot Contender it proved accurate and powerful enough for animals like muntjac and roe.

Rossi were most noted for their copies of the lever-action Winchester 92 (The Puma) and in the old handgun days they proved popular as a cost effective, pistol-calibre rifle mainly for British Western Shooting competition. However, they proved equally popular in the USA and their latest model the Rio Grande is what I have on test.

Chambered in 30-30 Winchester this is primarily a hunting rifle and you’d have to be blind not to see that it bears a passing resemblance to the Marlin 336C. But then again Rossi copied the Winchester 92 so why not the Marlin? First impressions are good, with acceptable, if not amazing blueing and good wood to metal fit and finish. The timber is beech with a flat, mid-brown stain, which would come up nice with a bit of stock oil and some TLC.

From the box the Rio Grande comes with iron sights, with a tall, brass-tipped blade up front in a dovetail and a semi-buckhorn, elevator wedge at the rear. A definite selling point is the inclusion of a Weaver-type base on the receiver, so scope mounting is not a chore. This is U-shaped in section, meaning you can still use the irons sights if you want to shoot bare-backed!

The closed-topped receiver is side ejecting, with the loading port underneath. Rossi have included a simple, cross bolt safety at the rear. It pushes right to left to FIRE (red ring exposed) and reverses for SAFE (green ring showing). It’s a hammer-block system so ON or OFF when you press the trigger the hammer will fall, but if ON then it cannot contact the firing pin. The mechanism also features a half-cock notch.

The old Rossi Pumas showed a stiff action that took between 100-200-rounds to run in. Not so the Rio Grande as the operating stroke is smooth and positive with no binding or hesitation. The mid-weight barrel strikes a good compromise between handling and ballistics at 20”. Underneath is a full-length mag tube that gives a capacity of six in 30-30, which is more than enough. It’s supported at the front by a band with a second that incorporates a QD sling stud at the front of the forend.

The butt shows a full and angled grip with a good width that ends in a ventilated rubber recoil pad with a second QD stud underneath. Length of pull was a decent 14”, so no complaints there! Weight is 7 lbs and with a scope fitted it feels solid but not too heavy. With an overall length of 39” it handles well and is quick in and out of the shoulder. The only thing missing is chequering as the wood is plain.

The trigger was good breaking at a crisp 3-4 lbs. If you are not used to this sort of rifle, the lock time (trigger pressed to gun firing) has to be accounted for as the hammer sweeps down through its long arc. So practice as it’s more noticeable on an unsupported shot and can throw off your aim!

I fitted a 1-6 x 24 UltimaxX6 scope from Highland Outdoors. With its x6 zoom range and compact dimensions it’s the ideal companion for a rifle of this type. The reticule is a #4-type with a central dot that is illuminated, at x1 it offers a wide field of view and almost red dot like handling, which would be appreciated for driven and woodland work. Up at x6 the magnification is more than enough to get you out to maximum 30-30 effective range too.

Ammunition went to Hornady, 170-grain flap point Interlock, the bullet shape was mandatory for tube magazine centrefires as the flat nose negated the risk of recoil setting of the rounds in the mag as they are stacked nose to primer. However Hornady’s new Leverevolution ammo uses a pointed, ballistically superior projectile with a rubber tip that keeps it safe. I have used these in 450 Marlin and 45-70 and they do give the range and accuracy edge, which was unheard of in any lever-gun prior to Leverevolution!

The Rio Grande loads easily and likewise the action cycles smoothly with no binding or excessive pressure required. Having passed all the tests so far the last two boxes to tick were accuracy and energy. Both critical criteria for the calibre and action. Over the chrono the Hornady load was averaging 2047 fps/1600 ft/lbs, so small deer legal only. Off the bench I was getting 2-3” groups at 100-yards. Personally I would not push it much further! However, I reckon the Leverevolution load would probably do better in speed, energy and accuracy potential.

Overall a well put together rifle, however for the UK the calibre has never been popular due in the main to the perceived low power of the 30-30 cartridge and the specialised nature and average accuracy of a lever-action mechanism. For me this is really a woodland gun, with 100-yards being a long shot!