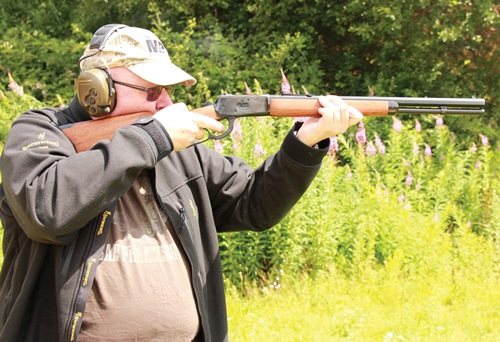 Rossie are Brazilian and have been in the gun business a long time offering all manner of rifles, handguns and shotguns. The Puma is a dead copy of the Winchester 92 with many feeling it was the best of the John M Browning designed rifles. I would agree as I think it’s superior to the later Model 94 and certainly never suffered the unreliable ejection problems of the later AE (angle eject) guns.

The basic layout went for a 20”, round/ light barrel with muzzle and forend bands and hardwood furniture. The forend was slim and of standard length with a straight-hand butt. The receiver was solid-based with a round profile with a single-piece operating lever which controlled two rising locking lugs that engaged at the rear of the action. This design was first introduced by Browning with the Winchester 1886 and was simpler and stronger when compared to the toggle locking system of the earlier 1866, 1873 and 1876 guns.

If a little basic the original Puma proved popular and cost-effective and a hit with many British Western Shooting Society (BWSS) members. From experience I always found the mechanism a little stiff in operation and the wood and metal finish a bit basic!

The Rossi agency is now handled by Highland Outdoors in the UK and the last rifle I tested was their Rio Grande very much a copy of the Marlin 336 in 30-30 Winchester. However on a recent visit to Highland they showed me a new version of the Puma that combines some classic looks with a few extra features.

First impressions are of a definite improvement in fit, feel and finish. The blueing is better with the base metal well struck off under the black. The timber, though still some form of hardwood similar to beech, is left natural with a pleasing brown colouration and smooth feel, much preferable to the dark stain of old. A bit of linseed oil or stock wax would bring it up a treat! Finally the action, as the old graunchy feel that took a good 100-rounds if not more to wear in is no longer present, replaced by something more consistent and even in operation.

Visually this model is more ‘old west’ with some classic styling. Most noticeable is the 20”, mid-weight, octagonal barrel with a ring securing the magazine as opposed to forend and muzzle bands. Sights are a semi-buckhorn elevator wedge at the rear, which is good for windage and elevation. Up front is a low, brass-tipped blade set in a transverse dovetail, both this and the rear can be drifted left and right for windage correction. The butt shows a steel, crescent style plate that locks the rifle into the shoulder. The look and to a degree feel is very much like Uberti’s 20” Sporting Rifle, which uses the older 1873 Winchester chassis. If this Puma had been around in the early BWSS days I reckon it would have sold well, appealing as it would to the twin demographics of style and value for money!

The most unusual aspect of the design is the safety catch, which was never a feature of the Puma or original Winchester 92. These rifles relied purely on a half cock hammer to give a safe carry and Rossie still incorporates it. However they now fit a firing pin block system, which consists of a small, L-shaped lever - top rear of the bolt. It rotates through 90°; on SAFE it points to the right with a green S exposed, to FIRE swing it to 6 o’clock and a red F appears. It looked familiar as it’s a Taurus design that I first saw on their classic pump-action and semi-auto Remington and Browning 22 rimfire reproductions.

Another feature is a hammer block screw that sits at the base of the quadrant, which is wound out with a special key when the hammer is down to lock the action solid. This is less a safety feature and more of a disabling device.

The Puma is chambered in 357 Magnum and marked for use with the shorter 38 Special cartridge too. These two rimmed rounds are identical except the 38 is 1/8” shorter and slightly less powerful. In truth for most usage the 38 Spl is all that’s required, plus it ups the capacity by one round. I opted for the 357 in the form of Prvi Partizan (PPU) 158-grain, copper-plated, truncated cone. I use this in my Uberti Winchester 1873 Special Sporting and it works well.

The Puma loads through a gate in the RH side of the action; you just push the nose of the bullet onto the sprung plate down and forward to a capacity of 10 (357 Mag). This is one area that Rossi has not seen to sort out as it’s a bit small and short and the edges are sharp and rough. It’s easier to place the first one in and let it sit in the opening and use the nose of the next round to push it fully in.

Ammunition transfer is smooth and easy, with no hardness or hesitation as the round comes up goes forward and chambers, unlike the horrible graunchy feel of the earlier versions of the 1990s. It shoots well and cycles reliably too. As with the original Model 92 ejection is straight up and back, so you cannot fit a scope over the action as you can with the side-ejecting Marlin 1894. B-Square used to make a side-rail that offset the optic to the left clearing the ejection path. But it’s not nice to use… Overall a good design!