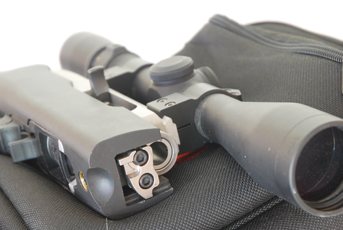 Though Ruger offer quite a few versions of their venerable 10/22 semi-auto rimfire rifle, which range from the basic wood/ blued model up to an AR15 look-a-like, this to my knowledge is the first in-house take-down. Though as I recall not the first attempt, as I saw a Butler Creek 10/22 Packer System a few years ago. This offered a replacement stock that hinged just in front of the action. When you swung the forend down the Butler Creek barrel could be pulled out as it did not attach by the chevron block like the 10/22, but was held in a different way. It was however discontinued.

The new TakeDown comes complete and looks essentially identical to the 10/22 stainless synthetic gun. The only give aways are the small gap between the forend and rest of the stock and the slotted barrel collar at the front of the action. Turning the rifle over you can clearly see the locking catch that allows you to disengage the butt/receiver section from the forend/barrel assembly. As we shall see a quick pull and twist movement is all that’s needed to do the job. Ruger also includes a neat, little backpack bag for the components to travel in.

But why would you want such a thing? Truth is it’s aimed more at the US market where many people go camping and can legally and easily carry a rifle for small game hunting or even protection. It’s probably less about serious shooters and more about outdoor types who feel a firearm would be of use.

No surprises on the rifle as the TakeDown (Model K10/22 TD) is a standard 10/22 and apart from the obvious nothing else has changed. Standard iron sights are fitted with a fold-down U-notch on the barrel and a brass-tipped blade at the muzzle. Optics are handled by a one-piece screw-on 1” to 1?2” base. The stock is black synthetic with a barrel band and cast-in chequering panels on the sides of the forend and grip. The butt is small, low-combed but workable with a curved and chequered plate at the rear.

Like all new 10/22s the TakeDown shows the new polymer trigger mech housing (TMH) with an extended magazine catch as standard, which is a vast improvement over the original flush-fit button. The safety is a cross-bolt at the front of the guard and pushes right-left to FIRE and reverse for SAFE. It only works with the action cocked! In front of this is the manual hold-open blade and there’s no automatic, last round function included. Feed is from their 10-shot, rotary box magazine. The barrel is 18.5” and assembled the rifle measures 37” butt to muzzle and weighs 4.6lbs. Ruger says the TakeDown will return to zero when reassembled, which was one of the things to check out!

The lock up consists of a plunger in the forend with a chisel nose that engages with a locking block at the front of and under the action. The other major piece of re-design is the barrel, at the chamber end is turned down to offer a slim, parallel section (chase) that slides into the receiver. Initial assembly requires a set-up adjustment, but after that the barrel is just put in and out.

With the magazine out and the bolt locked back and looking at the front of the receiver rotate the locking collar (adjustment knob) clockwise as far as it will go. Slide the barrel into the action with the forend at about 2 o’clock and when it’s fully home rotate it clockwise until it locks in position (sights at 12 o’clock). Now tighten the collar (anti-clockwise) as far as possible using finger pressure only.

Remove the barrel by pulling the locking lever (under the forend) towards the muzzle and at the same time rotating the barrel/ forend assembly anti-clockwise. Now rotate the collar one or two more clicks and re-insert the barrel, the rotary movement required should be firm but not difficult. Fine adjustments can be made using the collar if it does not feel right.

The real problem with any take-down or switch-barrel rifle is return to zero, as without it the exercise becomes pointless, as you will have to re-zero each time you ‘make the break’. For testing I fitted a Weaver 3-9x 38 Classic scopes in a set of Warne, 1” rings. Ammo went to MagTech high velocity, Lapua Standard Club, Winchester Expert and CCI and Remington sub-sonic HPs.

Reliability was not an issue as the TakeDown shot them all easily, but now for the acid test – return to zero! On average the rifle was shooting about an inch at 50-yards, which is acceptable for a 10/22. Typically you get the occasional lower or higher speed rounds that I call poppers and crackers, which is caused by variable powder capacity and unavoidable in any rimfire ammo. We’ve all seen it with the bullet striking either higher or lower even with the same point of aim, which has to be taken into account.

Whipping the barrel off and on showed a reasonable return to zero for a few rounds then I noticed some extreme point of impact (POI) variations. I repeated the exercise with all brands mentioned and what was surprising was that the MagTech high velocity fodder showed the least POI variations of all types. I can only assume from this that the higher speed aids repeatability, but that is just conjecture on my part. This I hasten to add was only after a barrel swap and if left on the rifle shot average 1” groups as described.

For the UK I cannot see much real application for the TakeDown, apart from the compact and more covert storage and carriage possibilities offered, which might appeal to some. On that point the rifle bag is compartmented for the butt/action and barrel/forend assemblies and when stowed does offer a discreet package. However and as I discovered with a standard scope fitted the butt/action section becomes too long to fit into its pouch fully, so I’d say QD mounts would be a consideration.