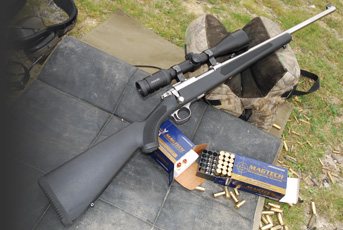 Though never having fielded a traditional lever-action rifle, as their 96 series was not Winchester/Marlin-inspired, Ruger has none the less offered a large amount of 44 Magnum carbines in three action types. In the USA this calibre and short gun build is very popular amongst hunters for close range work on deer and feral pigs.

Let’s face it; 44 Magnum in a rifle platform is a powerful and effective cartridge a fact that has not been lost on Ruger. Their first gun was the 44 Autoloader (The Deerstalker) which proved very popular. It stayed on their books for an amazing 26 years (1959 to 1985) and sold in excess of 250,000 units before being discontinued…

Next came a bolt-action - the 77/44 that used the rotary magazine chassis we more associate with the rimfire Rugers. This gave way to the 96/44, which was a lever-action of the same calibre, that looked very similar to the 10/22 auto-loader. For the UK Action shooter this gun had some potential, but was let down by a 4-shot magazine only and a lack of alternative calibres, as 357 Magnum would have been a better bet for that sort of use.

Back In Black & Silver

I tested the original 77/44 many years ago in its wood-stocked guise and to be honest had few complaints. For the UK this calibre is not normally associated with hunting, though offers some interesting possibilities as we shall see!

The new model is called the All-Weather as it shows a stainless action with black, synthetic stock. In terms of layout it’s identical to say my Ruger 77/22 and 77/17, in that it uses the flat-topped receiver build with three scope mounting points for their dedicated rings.

The 4-shot rotary magazine is the same though shows a bit of a re-design, but the release catch is still at the back, which you press up with your thumb and then hook it out at the front. Safety is by the standard Ruger 3-position lever (rear right) of the action; forward FIRE, middle SAFE with bolt operation and rear SAFE with locked bolt.

The barrel is 18 ½” with Ruger’s standard iron sights; adjustable blade up front with fold down U-notch at the rear. Weighing in at 5 ¼ lbs. and measuring 38 ½” long the 77/44 is a light and handy rifle that packs quite a punch.

As a hunter it occurred to me that within range limitations this little carbine could make an excellent woodland stalker; providing the energy reaches the required figures. It also might moderate easily too. Chances are its fixed build might also offer good performance, from what is an accurate cartridge even in a handgun.

Ancillary equipment consisted of some Magtech 44 Magnum ammo in 200-grain hollow point and 240-grain soft nose/flat tip loadings. On top was a Kahles 3-10x50 scope; perhaps a bit too much glass for a short ranger like this, but at least I could see what it was capable of. Given the usage something like a fixed x4 or x6 or a low power variable might be nearer the shilling!

The magazine is a rotary like the 10/22 etc, loads to a capacity of four and is easy to fill. However, the release catch is not as finger-friendly as my 77/22 and you do have to make a real effort to operate it.

Though a powerful short-range calibre, 44 Magnum - much like others of its ilk - tends to drop off significantly as the range extends. I figured about 100/150-yards was probably sensible. Though when I felt the trigger it occurred to me that maybe 100 might be better, as it was awful; however nothing that could not be sorted.

Like all modern calibres 44 Magnum is eminently reloadable and a look at US manuals shows that data is presented for handguns and rifles. Let’s take the classic 240-grain load for example. Hornady indicates that in an 18 ½” tube you can get around 1800 fps/1726 ft/lbs, however in a 7 ½” revolver this drops to 1400 fps/1044 ft/lbs. Quite surprising as both are deer legal (on paper) given your choice of species.

Shooting prone/supported, first up was the 240 flat nose, which produced 1.5 – 2” groups, so not too bad. However, the chrono told a different story at 1575 fps/1321 ft/lbs but still more than enough for muntjac and CWD. The hollow point, which looked like a bucket, such was the size of the hole in the nose, shot tighter at around 1 – 1.5”. This load gave 1729 fps/1327 ft/lbs, which was interesting as I had expected more…

It occurred to me that as the 200-grainer shot tighter than the 240, then maybe a 180 might be better and able to be pushed faster too. Hornady’s 44 Mag rifle data quotes speeds of 2100/2200 fps for this weight which translate to 1726 & 1934 ft/lbs accordingly. Sierra Infinity 6 showed that a threshold speed of 2063 fps makes 1700.7 ft/lbs. Plus, given this is essentially a pistol bullet, only real life testing could show how effective or efficient it might be.

But would you want to go to all that hassle to shoot deer with a 44 Magnum, with so many better choices around? Maybe not, but doubtless a rifle/calibre combo of this type does have its place and for me it would be as a moderated gun.

With 300-grain bullets running at 1226 fps a figure of 1001.1 ft/lbs is achievable. OK not sub-sonic but the best you are going to get for small deer work and certainly a lot quieter than a moderated 223 Rem etc. But are we now getting into the realms of fantasy, but it would be interesting to see what sort of result you might get…

In terms of shootability the Ruger 77/44 is a very pleasant little rifle and with full patch loads is well behaved, quick and easy to point and accurate enough for most needs. What you do with it is entirely up to you!

Interesting and unusual chassis for 44 Mag
Could make a decent woodland stalker for small deer species
Would 44 Magnum fit in with your needs?