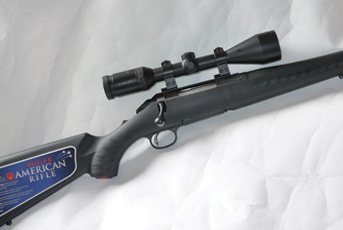 The age of the budget rifle has been upon us for a good few years now, but this sort of equipment is perhaps more relevant in these cost-conscious times. Yes we would all like top end kit, but nor do we all wish to pay that price tag. Equally, and in truth, the majority of modern rifles are made to shoot and it has been my experience that a £500 gun can match and even out perform a more expensive piece. The real difference apart from the cost is materials, cosmetics and handling. The same can be said in the main for modern optics.

So if saving a chunk of money and not driving a badge is your goal let’s turn our attention to the latest budget-buster to come out of the USA – The Ruger American. Which after some testing I feel is a cut above the rest of the crowd.

At first look the American seems identical to the Savage Axis, which is in exactly the same budget class. It is not but it’s the stock that gives that impression, though closer inspection shows that the Ruger has better lines and fits a bit easier in the shoulder. Truth is a plastic stock is a plastic stock and not a lot changes. I would believe if I was told that Savage makes them for Ruger, but I doubt it!

Also reminiscent of Savage is the trigger that looks just like their AccuTrigger on the outside with its blade within blade layout. Called the Marksman Adjustable™ trigger it can be set from 3 – 5.5 lbs by a single screw, though the action must come out of the stock to do so.But it does not stop there as the American shows other recognisable, non-Ruger features. The 3-lug bolt and action remind me of the Thompson Center Icon and the rotary, polymer magazine is very Browning X-Bolt. The tang-mounted safety, well Ruger wrote the book on that one with their original M77 and No 1 rifles, so beat everyone else to the punch there.

However one thing the American isn’t is an M77 be it Mk II or Hawkeye. Building a budget rifle means keeping it simple and with no frills, so you get a cheap moulded stock, long- action-only tubular receiver with a pair of Weaver bases screwed on. Plus a very basic flat finish! So no M98-like receiver, magazine system or bolt and dedicated rings. Though hating the stock I like the no-nonsense build and reckon with a better finish the American barrel and action in better furniture would make a handsome rifle.

The stock is OK as it offers a decent length of pull, thick rubber recoil pad, and aggressive gripping surfaces and is not too slim. The straight comb offers a fair head position and acceptable cheek weld. QD sling studs are fitted fore and aft and the forend as you might imagine is typically floppy, which is par for the course.

Inside is Ruger’s new Power Bedding system, which uses moulded-in, stainless-steel V-blocks (front & rear) that engage with slots milled in the sides of the action. Essentially the receiver is locked back and front in the stock. A different approach that does away with the conventional recoil lug in a pocket, and the barrel is fully floating, well as much as that forend will allow! The rifling is cold hammer- forged and Ruger says it will provide sub-MOA performance. In my book if it shoots an inch with the right ammo it’s good enough and from experience with other budget-busters I reckon it could go sub-1” easy enough.

The bolt is a solid steel bar with three, big locking lugs, fully supported head, plunger-style ejector and Sako-type extractor. It puts me in mind of both the Sauer 202 and Thompson Center Icon systems. The handle is basic with a decent ball end and the action stroke smooth and judder-free. At the rear is a plastic shroud with a cocked action indicator plate that protrude from underneath. The bolt release catch is on the left. Though a closed-topped receiver the ejection port is just about big enough to get your finger in if required.

I have always liked tang-mounted safeties and the Americans is good, being well positioned and offering minimal disturbance of the shooting hand. It pushes forward to FIRE and reverses for SAFE and the action can be cycled with it on, which is good for unloading drills. Bolt lift is an easy 70° with little effort required to set the cock-on-opening mechanism, which is brought about by twin cams so making operation fast and easy even in the shoulder!

Prices have gone crazy these days and so making these budget-types worth serious consideration and more popular than ever. For example a Ruger M77 Hawkeye All-Weather with synthetic stock and stainless finish in 308 Winchester has an SRP of £1060. The American in the same calibre costs £639, OK the stock is of lesser quality and there’s only a flat black finish, but the difference will buy you a good quality scope and mounts!

As standard the Americans for the UK market are threaded ½ x 20 UNF, so saving the buyer even more money. For the test I fitted my old Kahles 2.5-10x50 Helia CT, which was the first European scope I ever owned and the one I took on my first African safari back in 2005. I used Warne, 1”, medium height rings , this combination offered a decent head/stock position. Up front a Hardy Mk IV reflex moderator. This lightweight can does not upset the balance of an already light rifle, and fully bombed up the gun is easy to carry, handy and surprisingly shootable.

A plus here is that the Hardy moddy features an integral, 3-port muzzle brake on its front face that actually contributes to recoil control. With most 308s, though not an overly powerful round, I have always found it a bit snappy, especially in lighter rifles, so any form of add-on control is a bonus.

Ammo went to Winchester 150-grain PowerMax Bonded and for the heavier option GECO 170-grain PLUS. As suspected the American did feel a bit lively without a moderator on board, though the thick and squidgy recoil pad did its job admirably. With the Hardy fitted as I have experienced in the past not only does the extra weight/length help muzzle flflip but there is also a noticeable reduction too that I can only attribute to its integral muzzle brake system!

The general shooting experience was very good, bolt operation was fine as was feed and ejection. Personally I thought the ejection port a tad too small, I did not have any problems with cases not coming out or misfeeds. I would have preferred more access if it was needed, certainly for single loading. Size-wise the 22” barrel is long enough, which combined with the overall length of 42” and good weight even with scope and moddy on board made for a handy and fast handling package.

As I already said I like tang-mounted safeties and the American’s did not disappoint with that instinctive and smooth movement being completed by the thumb with little disturbance to the fifiring hand. Accuracy was as expected though in this case the American favoured the lighter 150-grain Power Max, which it was shooting at around the inch, the 170-grain GECO PLUS opened up to 1.5”, which is still more than acceptable.

I own some expensive factory and custom made rifles and like most of us take great pride in their ownership and performance and always will. But and as with previous plastic-stocked budget-busters the Ruger American proved that it could do the business reliably.

There is also the option of the 18” barrelled Compact model at the same price. These shorter rifles are always popular though I would say if you are picking 243 Win then go for the 22” Standard version as you might have problems making the large deer legal energy level of 1700 ft/lbs with this calibre. In 308 Win it’s not such an issue, but in truth that extra few inches is well worth the effort no matter what!

Visually the American is defifinitely easier on the eye than either the Savage Axis or the Remington 770, but at the end of the day it’s the same – a cheap, no-frills rifle that can shoot. For the cost conscious, beginners or as an ‘estate rifle’ it’s to be recommended!

VERDICT
No complaints, and with a better stock and finish it would be a really nice rifle