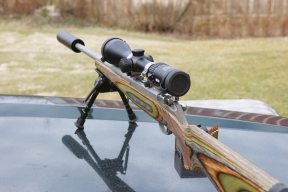 This has been an interesting gun test for me as I am a little biased to Ruger’s generic M77/22 rifle series, owning as I do a 22 LR (77/22) and the 17HMR All-Weather (77/17). This designation is pretty much their rimfire and small centrefire chassis and with the exceptions of calibre and magazine capacity it’s the same gun. Major physical differences are carbon or stainless steel metalwork, barrel weight/length and walnut or laminate furniture. The generic 77/22 chassis offers 17 Mach 2, 22 Long Rifle, 22 Magnum (WMR), 17HMR (Hornady Magnum Rimfire), 22 Hornet, 357 and 44 Magnum and now the new 17 Hornet.

It is however a specialised calibre and as a 17HMR shooter I could not justify also owning a 17 Hornet, feeling the HMR is more versatile for the rimfire hunter. However, the calibre certainly is addictive and does fill the gap between the HMR and the 22 centrefires within the 200-300 yard envelope.

I have always liked the 77/22 build as it offers fullbore feel and handling over other rimfires. My favourite build is the All-Weather, with laminate stock and stainless barrelled action with a longer/heavier 24” tube, Ruger uses this for both their 22 and 17 Hornets. However the latter came out of the box with a three-colour, Green Mountain Camo stock. The stainless steel metalwork is matt- finished and much preferable to the original, shiny skin of my HMR!

There has been some debate about barrel length with some wondering how short a tube they can get away with. On an HMR you do not need 24” and I soon had mine cut down to 20”, some go evenj shorter. But I feel that the Hornet is better at 24”! On that point it offers a 1-9” rifling twist with 6-grooves.

The 17 Hornet 77 is not a small rifle weighing 7.5 lbs (un-scoped) and 43.7” long (less moddy) but is not unhandy. Mine came threaded 1⁄2 x 20 UNF as standard and I fitted a 17-Hornet dedicated Hardy Gen IV reflex moddy. The importers Viking Arms also supplied a Meopta MeoStar R2 2.5-15x56 RD scope. I fitted a Harris BRS bipod and ammo came from Edgar Brothers with the 20-grain, Hornady V-MAX load. I also made both 20 and 25-grain reloads as already noted.

The M77/22 is a simple design and differs slightly from the fullbore M77 series. Most obvious is the flat topped action with three attachment points for Ruger’s dedicated scope rings. I opted for the high mounts, which in truth can be a tad cramped for 56mm objectives especially if they are of a beefier build. The Meopta just scraped in but I could not slide on a Butler Creek lens cover.

The bolt locks in the middle but it does not seem to make a difference! The 3-position safety is located rear/right of the action and is well positioned for operation by the firing hand thumb with little disturbance of the hand position. It pushes forward (FIRE), swings to the middle (SAFE) with bolt operation and fully rear (SAFE) with locked bolt.

Trigger pull is not bad; a little firm at around 5 lbs but with a crisp break, I could live with it and it was preferable to the one fitted to my HMR, which I replaced with a Rifle BASIXs. The blade is medium wide and smooth, I did however find the length of pull (LOP) a tad short for me at just 13.5”! This tended to refuse a first pad trigger finger position.

Feed is by Ruger’s, 6-round, rotary boxy magazine, which is just an up-scaled version of the original 22 LR, 10-shot clip; the release is a flat rectangular plate at the rear of the well. I have always found this a tad awkward to operate; especially with gloves on, but it does wear in with use.

The stock shows a sporter-style build with a slim neck and low comb; at the rear is a spacer and thin rubber recoil pad, extending the LOP would not be too much of a problem. The forend is neither too wide nor slim; it does not however float the barrel full length, which I would have done as a matter of course. QD sling studs are fitted and chequering applied front and rear. Though cosmetic the Green Mountain Camo is a nice look and far preferable to my HMR’s original black/grey furniture! Another good aspect of laminate is that it’s more stable than real wood!

Bombing up I noticed that the ammo was stiff going into the magazine and would lock up at 5-rounds. The metal feed lips seemed to have a rough finish, which seemed to smooth up after a few loadings as I recall my HMR mag was similar.

Running the factory ammo through the Hornet first showed a slight drop in velocity over the CZ to 3527 fps. Not an uncommon occurrence when using different barrels in the same calibre. I was also conscious of the initial problems I had with my HMR as it would shoot 1⁄2” then after 16-rounds the barrel would foul and groups would open up to 4”+. Easily cured by a clean out, but this continued for some time.

I’m happy to say the Hornet did not show this at all, though I kept it clean on principle. The factory was shooting around .75” @ 100 yards, which was not bad but I had hoped for better. I then switched to my 20-grain reloads and things improved in some ways. Groups shrank with possible 1⁄2” now achievable. I made up two batches of ammo due to the fact I was low on small rifle primers. The first used Mag Tech and the second Fiocchi and there was a marked difference in velocity and performance. The Mag Tech-primed were averaging 3645 fps/597 ft/lbs with an extreme spread (ES) of 62 fps; however the Fiocchi was 3729 fps/625 ft/lbs with an ES of 60 fps. Of the two the latter hit the 1⁄2” with the former just stepping outside of that.

As can be seen the velocity gain though better than the factory load was less than with the CZ to the tune of 157 fps. I also experienced some hard extraction with the reload and would drop the charge weight by 1⁄2-grain for the future. The 25-grain load also showed a noticeable drop at 3269 fps/602 ft/lbs compared to the original at 3331 fps/622 ft/lbs.

I think I shot over 200-rounds in the course of the day with regular cleaning at 50-shots. At the end of the session I noticed a normalisation of group size with 1⁄2” being the average with all weights/loads tested. I can only conclude that the rifle was fully run in! As I like the generic 77/22 I already have a soft spot for the 17 Hornet and feel it would be the one I would choose if I was going to get this calibre. However, I would do four things; 1 - fit a better trigger, 2 - get the barrel fully floated, 3 – get the action bedded and 4- extend the LOP by 1.5”.

FOR: Another 17 Hornet option and a good one
AGAINST: LOP a tad short at 13.5”
VERDICT: Looks good Handles well Good accuracy potential