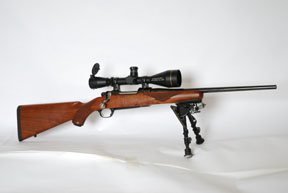 Like many riflemen I like carbines as they look good and, more importantly, handle and carry very well indeed. However, as there’s no such thing as a free lunch; the penalty for what amounts to a short/light rifle is an increase in felt recoil with a subsequent drop in weapon control and a reduction in velocity and therefore muzzle energy. This last factor is very important to your average UK deer shooter, as the law dictates certain parameters we cannot fall below.

A carbine can be as simple as a standard length design with the barrel cut down to suit, or a true small rifle with everything reduced accordingly and this is what Ruger has done with their Compact M77 Mk II. This year saw the introduction of their third version of their highly successful M77 centrefire series. Called the M77 Hawkeye, it has been improved in the trigger and with a few tweaks to the furniture in general, as well as offering some interesting new models and calibres – 375 Ruger and 300 and 338 RCM (Ruger Compact Magnum).

However, Ruger has retained four models from their older M77 Mk II series; namely the great Varmint Target (VT), the full-length, Stutzen-stocked International, the 14 ½” Frontier and the subject of this test the 16” Compact. Given everything else has ‘gone Hawkeye’, surely it would have been better to re-create these models in the new format, rather than stick with the old? As the whole reason to move up to a third generation was to improve the product and let’s face it, apart from the VT that shows a good trigger from the box, the standard Mk II unit did need a bit of sorting…
So in the Compact we have a pure M77 Mk II system. The rifle is undeniably cute as Ruger have gone at it from both ends with a short, 16”, 1-12” twist barrel and an abbreviated butt with a minimal length of pull of just 12 ½”. This however is built around the standard M77 action so does look a bit big in the middle. Feed is from an internal, 5-shot (223, four in larger calibres) floor plate magazine and the 3-position safety – fire (forward), safe W bolt operation (middle) and safe/bolt locked (rear) is as ever.

Trigger pull is as you would expect from a Mk II; medium heavy with a bit of creep and the barrel is not floated. The stock is walnut with a slim rubber butt pad. There’s chequering on the pistol grip and a small section on the very abbreviated forend and QD sling studs are fitted fore and aft. There are no iron sights and Ruger’s integral 1” ring system is supplied. Pushing the tape at a mere 35 ½” and weighing a scant 5 ¾ lbs this really is a tiny rifle. Calibre-wise the Compact keeps it simple with 223, 260 and 7mm-08 Remington, 243 and 308 Winchester.

Up Side, Down Side

Calibres aside the biggest concern with the compact is making deer-legal, which is 1700 ft/lbs + for roe and upwards in England and Wales and 1000 ft/lbs + for muntjac and Chinese water deer (CWD). Frankly this is asking a lot from a 16” tube, with the 223 version certainly showing this.

The 1-12” rifling twist precludes the use of bullets heavier than 55-grains, which need to be driven at a minimum of 2900 fps to achieve 1000 ft/lbs. To be honest this is asking a lot! I found with a 55-grain Hornady V-MAX load the best I could achieve was about 2800 fps/950 ft/lbs, so no cigar. The only way to get this figure is to move to a heavier bullet as a 69-grain BT/HP Sierra Match King driven at a minimum of 2560 scrapes in at 1003.9 ft/lbs. However, the standard, 1-12” rifling twist will have stability problems with this weight.

Truth is in this calibre the Compact is really pretty much a fox rifle only. Likewise in 243 Winchester, which is another barrel length critical calibre, you would need to be driving a 100-grain bullet at 2770 fps to achieve 1700 ft/lbs. With a lighter 80-grain load the speed would have to go up to 3100 fps to achieve the same energy figure. Again both these are unlikely to be realised in a 16” tube; so legally 243 will only make muntjac and CWD.

It’s plain to see that with the Compact’s short, 16” barrel you really do have to go up-calibre to achieve deer-legal energy for the UK. Which will result in more recoil; and less control. However, if you just want a fox carbine then the Compact in 223 Rem is a sweet little rifle. I fitted it up with my old Leupold Custom Shop 3-9x50 and used Hornady 55-grain TAP FPD ammo.

The short forend and barrel makes for a far more rigid front end and shot off a rest at 100 yard the rifle/ammo combo was turning in ¾-1”. I did find the butt a bit short and had to crank my head back to get a decent sight picture, as the scope was as far forward as was possible. You could fit a butt extension, which would do the job.

On the plus side the Compact would make a nice, moderated rifle as it’s short and light so the extra weight of a can would not add a lot to the overall package either. It would also make a nice youth rifle too.

I admit to having some fun with the Compact, though feel for your average male it’s just a bit too short at both ends. If you want a fox/small deer rifle then forget 223 Rem and go for 243 Winchester. For me I’d pick 260 Remington as I reckon that is probably the best compromise in terms of energy/effectiveness and recoil. Truth is there are a lot more UK-friendly Ruger M77 Mk IIs and Hawkeyes out there that will do the job much better…