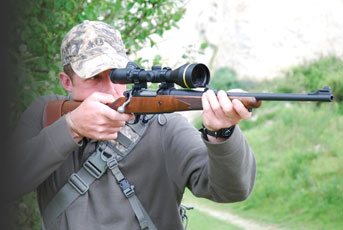 There’s little doubt that Hornady as a company have come up with quite a few new calibres over the recent years, sometimes on their own, often as not in collaboration with a rifle manufacturer. Ruger is one of these beneficiaries with their .20”cal varmint round (204 Ruger) and more recently the 375 Ruger for big game.

Now Ruger are bang up to date with a pair of cartridges not unlike Winchester’s WSM (Winchester Short Magnum) series; called RCMs (Ruger Compact Magnums) they follow the same dumpy (short/fat) case style and are available on both 300 and 338 options. Here’s what Hornady say about them:

“The Hornady 300 and 338 Ruger Compact Magnums (RCM) outperform the 300 and 338 Win Mag cartridges, but in a short action rifle with a compact 20” barrel. This package delivers what all the short fat cartridges don’t – superior ballistic performance in a truly compact firearms platform that achieves velocity and performance as advertised!”

Pretty impressive no doubt and all this from a 20” tube. But there’s more, as we are also told:

As a long term devote of the WSM series I had yet to be convinced, but was looking forward to seeing what the real deal was. However, if they worked as stated the advantages would be a short, light and user-friendly rifle that punched well above its weight.

Now if either of these could produce anywhere near those figures in what on initial inspection is a case with slightly less capacity than a comparable 300WSM and from a 20” tube, I was going to be seriously impressed. However, reloading seemed to be at odds with these figures! Hodgdon already offer RCM data and their top end loads with 165 and 225-grain bullets were coming in around 150/200 fps under the Hornady factory quote.

It could be another case of 204 Ruger syndrome; here factory fodder hits the quoted figures, but try as you might you can’t push them that fast even with the largest, quoted reload.

Don’t get me wrong I’m really into this short/wide case thing and know for a fact that some really do bring home the bacon. My 6.5 Grendel is of that ilk and with around 30% less powder - in most cases - can out perform a 243 Winchester. It makes no sense to me but real time testing shows it works. So maybe the subtly different RCM might do the job better? Or were they just ways of re-packaging old favourites like 30-06 Springfield and 338-06?

The RCMs are based on the belt-less 375 Ruger case, which is yet another Hornady creation and a good one! My tests have shown it offers significantly more than the old 375 H&H Magnum and is far better behaved too. This to my mind boded well for the RCM as it comes from the same design ethos.

Comparisons to the WSMs show a few differences; the RCM has a gradual taper on the main body as opposed to the parallel build of the Winchester. Oddest of all is the fact that the 338 is around 1/8” shorter than the 300 at both neck and shoulder, though the cartridge overall length (COL) is the same. The WSMs all show the same length with just the neck diameter changing to accommodate the specific calibre.

This initial test would be simple as I would shoot for group and manners at 100-yards then chrono the results and run them through my Sierra Infinity 6 ballistics programme to see what the real time data was. As I now have RCM dies, bullets and brass from Hornady, I will at a later date see what reloading can achieve with these two. But first let’s look a bit closer at the hardware?

I own a lot of Ruger bolt-actions in both rimfire and fullbore, and apart from their M77 Mk II Varmint Target (VT), which is a cracker, I would have to say that the new Hawkeye version of the M77 is the best yet. The changes are subtle as the basic layout with its floor plate, top-loading magazine, 3-positon safety, action and scope mounting system remains the same. Stocks are slightly fuller with the synthetics being noticeably more stable, By far the biggest improvement is their LC6 (light & crisp) trigger unit! Until the introduction of this; the first thing you had to do with an M77 Mk II (VT excepted) was to replace or get the mech sorted!

The RCMs are identical in terms of layout and available in the matte stainless/synthetic (All-Weather), which unusually had a dark green stock and the matte blue/walnut (Standard) versions. The 20” barrel is of light/medium profile and shows a high, ramped, brass-tipped front blade and an adjustable, Williams U-notch unit at the rear. Capacity is 3+1 (either calibre) and the rifling pitch is 1-10”. Weight un-scoped is 6 ¾ lbs with the Standard running 39 ½” top to bottom and the All-Weather 40”. This is down to the length of pull (LOP) and is noticeable when you shoulder each model. Both guns show a rubber recoil pad and QD sling studs as standard, plus a set of Ruger’s 1” rings.

Barrels are unfloated and a tight fit in the forend, with both stock styles showing effective chequering. As I am now into driven game shooting I really liked the compact and handy nature of the design, with the iron sights being a useful feature for close encounters. Given the potential; either one could make a fine choice for wild boar, or where you just needed a small/easy to carry but hard hitting hunter.

In keeping with the rifles I fitted two different scopes. The 300 got a NightForce NXS 2.5-10x24, with its illuminated, Mil-Dot reticule it seemed to suit the calibre well, with enough top end mag to reach out if required. The 338 got the new Leupold VX3 3.5-10x50 in this case with their Boone & Crockett illuminated reticule. Both were fitted up in sets of Warne, Ruger-dedicated QD rings, again an essential consideration as iron sights were standard and could be needed.

First up the chrono and I have to say that though not hitting the exact figures the RCMs came pleasingly close:

However, neither can compare to Hornady’s 300 and 338 Win Mag factory loadings. Lopping off around 50 fps, which is probably what you would lose through a standard rifle still puts the Win Mags ahead of the game, but it also shows the RCMs in a good light too. I think it is a bit naïve to suppose that either could out perform the Win Mags, given their larger powder capacity

Now onto manners. Both RCMs are certainly punchy in the shoulder with the 338 being the more energetic of the two… Though liking the compact package; maybe a bit more weight and perhaps a 22” barrel would have been more sensible! Both are rifles you need to be hanging on to and also aware of the potential of getting scoped if you don’t take charge of them. However, as hunters the biggest problem as with all calibres of this type is zeroing, as in the field one or two shots is not an issue.

Accuracy-wise I found the 338 was perhaps a tad more precise with it pushing one inch at 100-yards. In its 165-grain loading the 300 was turning in 1 ½” at best. Though far better than the M77 Mk II trigger I found the LC6 unit could have done with a bit less weight. Naturally both get very hot, very quickly and with un-floated barrels you need to keep an eye on thermal distortion that will open up groups.

For me, and as with my 8.5x63mm which is a slightly improved version of the 338-06 and my 300WSM, it’s not just about raw power. I load for both of these with shooter comfort, control, correct bullet choice and ability in mind. Sure they are not churning out maximum figures but they do the jobs I ask of them and that includes some big and tough animals.

This is how I see and would approach the RCMs, by taking advantage of their compact size and weight with slightly more sensible handloads. After all there is not much on the planet that’s going to stand up to the right 300 or 338 bullet pushing around 3000-3300 ft/lbs…

However, where these two cartridges fit into the UK scene remains to be seen. Of the two and though preferring the 338 I feel the 300 would be the better choice; we shall see if either catches on…