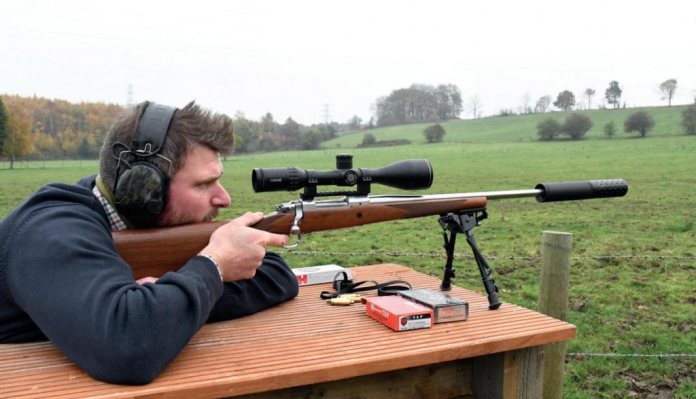 Perhaps the most modern step for a US-derived rifle is the threaded muzzle for moderator or brake. Which, these days the Americans are rapidly accepting for some tactical disciplines and also hunting. It’s a 5/8”x24 tpi behind a neat, rebated crown which is easily shod, so I added a Wildcat Evolution for the entire review period as I see this as somewhat expected in our home market of stalkers. The 22”/560mm barrel shows a sporter profile of 16.4mm/0.6” with 5R rifling. There’s a slight swell into the reinforce where it meets the flat bottomed, almost oval-shaped action with another at the muzzle. Typical are Ruger’s dedicated scope bases inset into the stepped receiver bridges. Normally a set of 1” rings are supplied as standard, but in this case, a 20 MOA Picatinny rail is attached securely instead. This is, without a doubt, a smart move, giving more commercial appeal.

The open-topped action shows a full length, non-rotating, Mauser claw extractor which wraps the right side of the flat bolt face to accept case rims presented by the follower of the 4-round internal sprung floorplate magazine. It’s release latch is integral to the front of the trigger guard. The bolt shows a short 45mm handle with a 90º lift angle to unlock the twin forward lugs before drawing back 105mm in its stroke to reload, which is a bit longer than necessary for a SAAMI 72mm C.O.L. (cartridge overall length).

The handle carries a scallop on its upper surface to evade contact with the scope’s underside and although functional, given the likely use of glass, perhaps an extra 10mm added to the overall length within the spherical ball handle would help, with a little more space. I would not always jump on that bandwagon, but the long bolt and smooth transit aren’t likely to jam and it would just make the rifle cycle a little faster with more definite ejection derived from bolt speed.

The sprung bolt release catch is sited on the left rear action bridge and the bolt shroud shows the familiar, 3-position safety: forward – FIRE, middle - SAFE with bolt operation, rear - SAFE bolt locked. This also locks the firing pin and not just the trigger. When cocked, the tail of the firing pin protrudes to indicate gun state. With no proof of anything, either way, I just feel a little more secure with this design style that has survived so long on the Mauser. Especially as it requires both forefinger and thumb to operate it quietly which naturally keeps fingers away from the trigger during operation. Maybe that’s just me though.

The top-loading action fills easily enough and feeds 100% reliably with zero damage to the cartridges in terms of them getting bumped and scraped along feed ramps and this is one of the joys of controlled feed actions. Primary extraction as the bolt handle lifts and cocks after firing was plentiful before rearward withdrawal of the handle reveals the manual ejector from its underside as the bolt reaches its extreme extension. Manual ejectors like this allow bolt operation speed to dictate how hard and far cases are flung free of the action. In this, the Ruger’s operating span was perfectly balanced in this respect, although I have to say the bolt handle is more ‘fingertip’ than the full hand-sized grip.

The single-stage ‘LC6’ trigger is advertised to feature ‘smooth, crisp performance right out of the box’. In reality, the design presents a slender curved stainless blade with good reach from the raking sporter grip. It breaks at 52oz with a small amount of creep but it is not gritty. It’s not user-adjustable so reflects the allweather hunting nature of the rifle, tallying well with a spacious trigger guard for gloved fingers in cold weather. I found it predictable and consistent and results on target certainly showed no later failings.

Stocks can always make or break the classic lines of a rifle and the Hawkeye’s straight grained walnut unit is to me, the quintessential American hunting handle in both looks and performance. Typically, it has QD sling studs front and rear. The forend is stiff and fully floats the barrel, with plentiful lateral and underside chequering for grip in all conditions. The hinged floorplate has a modest characterful Ruger logo that conceals three Allen screws to retain both action and trigger guard. The front screw is angled to lock the guns flat underside and recoil lug into a stress-free fit on the small recoil block. With an additional lateral steel reinforcement screw adding bridging strength to the walnut laterally in this highly stressed region.

The grip is quite slender and linear in rake for that fast, pointable and almost shotgun-like feel for natural point and shoot performance, with a sloping comb for head support. The comb is slim and comfortable in shape but don’t add too large a scope otherwise you will find it too low, but all dependant on face shape regardless. A slim rubber recoil pad is fitted that grips the shoulder pocket and for me, complements the natural feel with recoil and noise dampening properties that only straight grained walnut seems to offer.

I like the fit and forget nature of polymers and synthetic, which can exhibit excellent character when well made. However, they will never have that feeling of life walnut gives, especially on lighter stalking rifles. Blended with the soft shooting of the 6.5 Creedmoor, it’s a gun I find hard not to like. The grip is perhaps a little small for my hands and length of pull (LOP) at 13.5” is too short. But with these two personal ergonomic shortcomings, it says a lot that the gun was still a pleasure to use and definitely suited to those with smaller hands.

Although and without a doubt a stalking rifle, the Creedmoor cartridge has inherent long range capabilities too. That said, it’s similar to most other 6.5’s with enough puff to send a 140-grain bullet into the 2700- 2800 fps arena with corresponding ballistics, inherently mild recoil and effective terminal performance depending on the exact bullet. 120-grainers will be closer to 3000 fps but I used a couple of Hornady offerings to test the capability of the cold hammer-forged barrel straight from the box, and it was a gun that made my life easy, which translating to any other customer, makes life and likely ammunition fussiness less of an issue.

I used 147-grain, TAP match ammo as well as 140 ELD-M, which both shot sub-MOA, 3-round groups on all occasions. The ELD-Ms exited the barrel at 2790 fps and showed cloverleaf capability slightly superior to the 147’s and other tested ammo. More importantly, no ammo showed a great point of impact shift at 100 metres or specifically weak performance.

I shot multiple groups with a hot barrel and have no doubt in calling this a true performer. It is an easy to shoot rifle with slightly nose heavy balance, and a little more so with the mod on. It was delicate under recoil thanks to the dampening walnut stock with moderated performance on target that made me wonder why we get so excited for heavy barrelled rifles in the field. I didn’t do any long-range shooting with the Ruger but sub 25 fps extreme spreads with factory ammo were confidence-inspiring for any realistic hunting ranges and a 20 MOA Picatinny rail will extend the reach of any rifle for target use.

A rifle with a nod to classical styling and handling yet tallied with modern manufacturing standards to assure performance in the field. Assurance of tight bore/groove tolerances on the 5R barrel with minimum headspace and chambering may sound like marketing spiel, but the Ruger was confident straight from the box and that always pleases me, the kind of gun to make life easy without becoming too sterile.