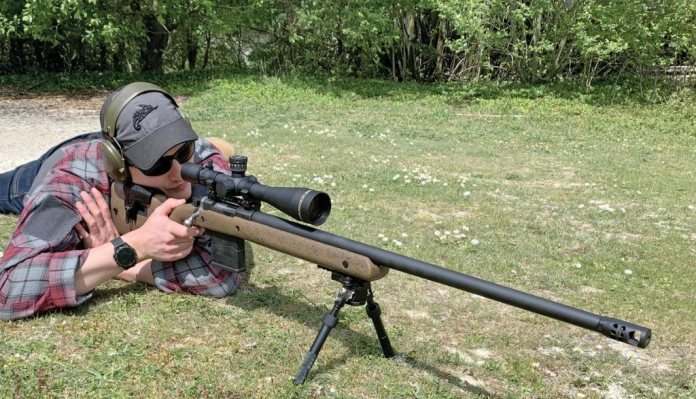 From the moment I saw the Hawkeye Long Range Target (LRT) I knew that it was a rifle I would like to test, possibly because it looks remarkably like the popular Bergara HMR! Since Ruger’s Precision Rifle (RPR) hit the scene and sold in droves, all the manufactures have been scrabbling for a piece of the long range market. To target a different part of the audience, Ruger decided to use their M77 Hawkeye action, traditionally focused towards hunting to create a target-orientated option.

The LRT comes fitted with eye-catching, adjustable, brown (with black over web) furniture that definitely looks fit for purpose, a clear nod towards prone and positional shooting. It is an ambidextrous, laminate build, designed to be as rigid as possible, more resistant to climatic shift, rain and moisture plus improves accuracy and consistency. There is no checkering, instead, the textured finish offers good grip all over, which is a nice touch.

Starting from the rear, the design includes a 1” thick rubber recoil pad, secured via two screws. It is fitted in conjunction with a 0.5” spacer to give a 13.5” length of pull (LOP).

Two more spacers can be added to increase it to a maximum of 14.5”. There are QD (quick-detach) points on each side and a plastic, height-adjustable comb which is from the RPR. It’s 4” long and 1.5” wide making it comfortable. It can be moved forward or backwards by 1.5” and offers 1” of vertical adjustment. It is secured in place using a sprung lever on the right-hand side, which can be swapped to the left and if required the cheek piece can be repositioned back to front.

The ergonomics are all on point, the butt incorporates a hand stop so that it can be pulled into the shoulder and includes a narrow 5” base which rides a gun bag nicely once the sling stud is removed. The pistol grip is comfortable if not a little narrow, includes a large thumb shelf and encourages a good trigger finger position. The forend is substantial, showing a flat base that swells slightly. It is about 2” wide and includes a QD attachment point on the left-hand side and a flush-mounted 9” M-LOK rail for attachments like tripod adaptors, barricade stops and bipods.

Unlike a 6-land form, which face opposite each other, the 5R’s don’t, with a land facing a grove, so reducing bullet deformation to a degree. Their angular sides also minimise fouling and normally provide good velocity figures. The tube has a heavy, tapered profile and is free-floated to the re-enforce, where the diameter measures 29.5mm, reducing to 21mm at the muzzle. It is threaded 5/8”-24 for a moderator and comes pre-fitted with Ruger’s hybrid brake.

At the heart is the controlledfeed M77 action, which is based on the Mauser 98 action and has been around for a while, it is a solid steel, proven design. It comes with a standard matt black finish that matches the rest of the metalwork. It shows a large 2.75” ejection port and a gas escape vent on the right-hand side. As well as their standard integral scope mounts, which are machined into the receiver, I was pleased to see that they have included a 5.5” long 20 MOA Picatinny rail.

On disassembly, I found the action is secured via two different sized screws, with the front one including a small adapter. This guides it in at 45°, directly into the recoil lug on the flat bottomed receiver, pulling it downwards and back into its inlet. The trigger guard and magazine well can be removed by undoing a couple of screws on the right-hand side of the stock.

The strong, one-piece, stainless steel bolt shows two locking lugs providing a 90° throw and a large 4.5” non-rotating, Mauser-type extractor on the righthand side. This is part of a controlled feed system that is designed to strip a round from the magazine, which is then immediately pushed through the gap at the base of the bolt face and secured via the cartridge rim by the extractor. The bolt and user, therefore, has complete control as it makes its way into the chamber, meaning no double feeds. In use, I actually found the extractor did not take control until the bolt had travelled ¾ of the way to the chamber. However, this does mean the rifle can be single loaded which is always useful. The face shows a cut out for the fixed blade ejector located inside the receiver, and as a result, the ejection strength is dependent on energy imparted by the shooter.

The 2” bolt handle has escaped any updates, it is scalloped and angled back, showing a standard, 20mm diameter knob. Perhaps due to its original hunting roots, it sits fairly flush to the stock, I would prefer something slightly longer with a larger knob for more leverage and faster manipulation!

The safety catch is a 3-way lever, positioned rear right of the receiver. Forward – FIRE, Middle – SAFE with bolt operation and Rear – SAFE bolt locked. The bolt shroud shows a large, black, cylindrical, cocked action indicator which is easy to see or feel and the release catch is located rear/ left of the action. The trigger is a very capable, adjustable, 2-stage unit which helped me get the most out of the rifle, proving to be consistent in use. Feed is from a polymer, 10-round, single-column, detachable magazine. It is AICS-compatible and proved reliable in use. It offered a cartridge overall length (COL) of 2.870”, an important consideration when reloading for 6.5 Creedmoor. The release is a spring-loaded paddle located centrally, in front of the trigger guard, allowing for easy, onehanded manipulation.

For the test, Viking Arms supplied a Leupold VX-3i LRP 6.5-20x50 scope which I attached using some of their mounts. I also fitted a section of Picatinny rail to the underside of the forend to attach a bipod. I opted to keep the muzzle brake on to see how effective it was. Ammunition included some Remington Premier Match and Core-Lokt.

Once I adjusted the rifle to my dimensions I was ready to go. I started with the match to set a benchmark and printed three groups with an average size of 0.53” not bad! I then did the same with the Core-Lokt which to my surprise managed a slightly smaller 0.52”. If those results are anything to go by; I think most shooters will find solid performance from a wide variety of factory ammunition (See ammo table). I was surprised to find that the 26” barrel did not show significant gains in velocity when compared to similar rifles with a 24” tube. However, the tester was brand new and after a bit of use I am sure speed would creep up, with further gains found when using reloads. At the end of the days, any FPS gain is useful for long range shooting!

I enjoyed my time with the Ruger, it definitely appealed to me and I wasn’t surprised that in use it performed very well straight out of the box. The action is solid, with feed and function proving reliable, however, there was a bit of slack in the bolt and when ejecting the cases, they would bounce off the receiver, leaving marks, which is typical of the M77 action. I did like the trigger, which was a pleasure to use and liked being able to control the strength of ejection, by adjusting the speed of bolt operation. This made the brass collection a lot easier! In use the muzzle brake was effective, the lack of a moderator allowing longer, faster shot strings before mirage built up. Overall a very capable rifle, that is priced to compete with the rest of them.