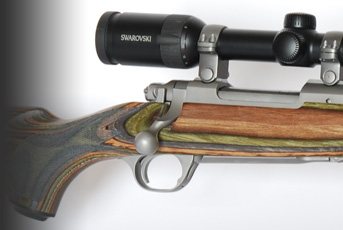 There’s little doubt in my mind that Ruger’s third revamp of their M77 centrefire series, which they call the Hawkeye, has produced a better rifle all round. In some cases all it has been is subtle tweaks on the stock and action along with their improved LC6 trigger. I have a 25-06 Rem and also the African model in 375 Ruger and am pleased with both of them. However, last year we saw two quite different guns the Tactical and Predator.

Naturally I put in for both and the first to arrive was the Predator, which is a dedicated varmint machine chambered as it is in 204 Ruger, 223 and 22-250 Remington. Initially eye catching due to its attractive matt stainless finish and tri-colour laminate stock this gun is actually a whole lot more.

The M77 build remains the same with essentially a modernised, Mauser 98 action. The bolt handle is scalloped and angled back for easy manipulation, the safety is a 3-way lever, rear right of the receiver. Forward – FIRE, middle – SAFE with bolt operation and rear – SAFE bolt locked. On the left is the bolt release catch. Feed is from a floor plate magazine, the 22-250 version holds four, with both 204 Ruger and 223 Rem offering five. The barrel shows a 24”, light/medium, tapered profile that sits tight in the forend. Twist rate is still the old industry standard 1-14” pitch. Ruger include a set of their dedicated 1” rings in the package.

New however is the stock and trigger mech. The furniture is what I would term as a heavy sporter, with a low comb and tapered forend and nothing like Ruger’s more target-orientated M77 VT (Varmint Target) woodwork. The look is good and uses a three-colour (grey, orange & green) laminate that Ruger calls a Green Mountain. Chequering is in the usual places and provides a good grip though visually it does not compliment the material, looking a bit grey and fuzzy. With QD sling studs front and rear and a slim rubber recoil pad the length of pull is 13.5”

Removing the action from the stock reveals that the barrel is pressure bedded, which is a method of pre-stressing the tube to try and eliminate or control movement as it heats up. Past experience with Remingtons and Weatherby’s has shown this not to work that well, however we would have to see.

The new Target Trigger is a 2-stage, adjustable design that does give a crisp and totally predictable break from the box. The LC6 (light & crisp) unit on the standard Hawkeyes is pretty good, but this is streets ahead. The feel is easy to get used to with a slight, take-up movement before you get to the release point. This allows you to get on to the medium width blade and take full control; knowing the shot is just a light squeeze away.

Weight-wise the 22-250 version tips the scale at 8 lbs (un-scoped) and is a tad on the heavy side. With a scope, bipod and doubtless a moderator up front it will be far less a walk about design. The gun takes its name from a style of rifle/hunting in the USA and is probably better described as a light varmint. Heavy enough to be accurate but light enough to be just about carryable in the manner of a normal hunter. This seems to be the new trend as both Remington and Savage also offer predator-type rifles.

First impressions were of a good looking, slightly weighty and reasonably well proportioned design that feels fine in the hands with a superb trigger. To this I added the new, one inch bodied, Swarovski Z5 5-25x52P scope I have on test. The combination of this high quality, long range optic and 22-250 Rem seemed like ideal companions to me. Ammunition went to Hornady with their 40, 50 and 55-grain V-MAX loads.

To my pleasure the Predator shot the 40 and 50-grain loads into ½”, with the 40s just acing the 50s. It did not however like the 55s at all with those tight .5” groups opening up to big, ragged, 2-3” scatterings. That’s down to the 1-14” twist rate, which is still industry standard in the US for 22-250 Rem. However, it’s seen primarily as a varmint round by the Yanks so hardly surprising. But it would be nice to try a 1-12 or tighter and see how the calibre does with heavier bullets.

Ballistics As Follows (at muzzle):

Of the two loads and even though the 40s have nearly 300 fps extra launch velocity, out to 500-yards the 50s carry more energy at all ranges and are probably the better choice. With a 200-yard zero (inch high at 100-yards) you are just an inch low at 225-yards with the 50-grain load, with the 40s offering similar. So both very much point, place the cross and shoot at what are probably the more normal distances. Though not a kicky round the 22-250 in the Predator proved very recoil friendly with the ability to stay on target and observe the strike.

With the rifle zeroed I decided to see how good the pressure bedding was and set up a series of small targets, cracked open a box of 20-rounds and proceeded to shoot. I’m happy to report that this sustained fire test did not degrade accuracy to any significant degree. Though I somehow doubt you are going to get that many live ones coming at you in the field.

To be honest this is one of the sweetest shooting, fullbore Rugers I have used; I love the Predator look and build, likewise the improved trigger, all of which results in superb, down-range performance. I can’t see too many of these guns being ordered in 204 Ruger, but with a 1-9” twist the 233 Rem is going to be popular. In this calibre the barrel length is reduced to 22”, which is probably more than enough. For me I’d stick with the 22-250 as I don’t own a gun in this calibre and it would make a great fox and small deer rifle; certainly with its ability for precise bullet placement.

The recommended price is a bit better than I thought at just over a grand. OK not that cheap, but doubtless in the shops that will come down a bit. I am now trying to find reasons why I don’t need to add the 22-250 Ruger Predator to my collection and I’m not doing so well… Cracking rifle, no question!

Probably the best hunter/varmint Ruger has ever made