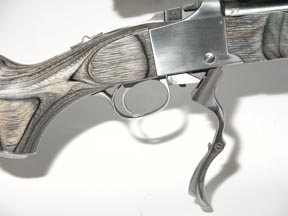 These days single shot rifles are more the premise of the black powder cartridge rifle (BPCR) shooter and typified by copies of the Sharps and Remington Rolling Block. Apart from this and in general this form of action is not that popular in the UK and looking around the world there are only a few companies producing something but not that many. Famous names here are Thompson Center with their Contender and Encore and Ruger with their classic No 1 and it’s the latter I’m looking at.

The No 1 is a typical Ruger product with visual and mechanical features borrowed from earlier designs. For example the falling block action and tang-type operating lever are doubtless inspired by the old British Farquharson from the turn of the century. Yet the company makes great use of hi-quality investment castings and modern materials, so you have a surprisingly pleasing blend of old and new.

There are nine models in the range from the Standard to the Stutzen-stocked International. Plus light and medium Sporters in a choice of blue/walnut or stainless/laminate and even the mighty, big bore Tropical model. There’s also a Varmint and calibre choice ranges from 204 Ruger up to 458 Lott.

A few of my colleagues have Standard No 1s in deer calibres like 243 or 308 Winchester and they do well, but for me it has to be the Stainless Sporter in 45-70 Government. Looks belie the size as it’s not that big, weighing in at a mere 7 ¼ lbs with its seemingly short 22” barrel and overall length of just 38 ½”; features that can make them quite punchy in the shoulder in the bigger calibres. It always surprised me why Ruger never made a long barrelled BPCR version, as that style of shooting is popular in the USA.

Not all versions in the range come with iron sights but the Stainless Sporter shows an interchangeable, ramped blade up front and a fold-down, adjustable double U-notch on the short, ¼-rib at the rear. This also doubles as a base for their dedicated rings, so you have the choice of irons or glass…weighing in at weighing in at less Sporter1 K1-S-BBZ-S-BBZ
With this model Ruger went for the classic look with the forward sling swivel fitted to a barrel band. Likewise the forend shows a slot at the front, which they call an Alex Henry-style tip. Add to this the build of the iron sights and the rib and you have a gun from the turn of the 20th century. However, all of this retro styling is a bit at odds with the brushed stainless barrel/action and black/grey laminate furniture. Though saying that I do like the two-tone effect it offers.

As you might imagine the butt is shotgun-like with a straight comb and no cheek piece, underneath is a QD sling stud and at the rear - a slim, rubber recoil pad. The action, unlike all modern single shots, is a falling block system, this artillery piece type build makes for a lot of strength as we shall see. A manual safety catch is located on the tang and slides forward to FIRE and reverses for SAFE, this only works with the action cocked. Though some might say a manual system is not as safe as an automatic one, which re-applies the safety as the action is opened, for what is a close up gun, which might require a quick reload and second shot; it’s far more preferable.

Also unusual is the fact that the No 1 features an internal hammer, so cocking is accomplished by opening and closing the action. To do this press in on the catch on the long section of the operating lever that wraps around the trigger guard and push it down and forwards. This will drop the block and expose the chamber; slide a round in until it chambers and with the muzzle slightly down (to stop the round falling out) close the lever, which will shut the breach. To eject - open the breach and the ejector lever on the left of the chamber face will forcibly chuck the empty out.

Faster Than You Think

Though loading is manual and ‘one at a time’, the operation, with practice, is reasonably quick and simple. The best bet is to get one of those elastic ammo carriers that slides over the butt and holds around 5-10 cartridges, as it place a ready supply close at hand.

As I already mentioned the overall feel of the Stainless Sporter is light and compact, which is a bit at odds with its 45-70 Government chambering. This calibre can be reloaded to suit all manner of actions from the weak original and reproduction BPCRs, the medium strength Marlin 1895SS and XLR lever-actions and the strongest like the No 1. So if you want maximum power, which is not that much under a 458 Win Mag; expect some big recoil. However, for the hunter factory ammo running 300 to 400-grain soft tip bullets is ideal, as it has to be SAAMI spec to be safe in a repro BPCR.

It still generates a decent wallop though and a rule of thumb indicates that an average speed of around 1800-2000fps with those weigh bullets is achievable.

For the test I made some reloads using Sierra 300-grain JSP supplied by importers Henry Krank & Co Ltd. I fitted a Kahles 1.5-6x42 CSX L which seemed an ideal optic given the short range nature of the rifle/ammo combination and the type of work it would be used for.

Like a lot of really big bores 45-70 is not the most accurate cartridge in the world, but more than good enough. Off the bench at 100-yards groups averaging 2-3” were the norm; so more than enough given you might be shooting wild boar or deer in woodland. Recoil was acceptable, as it is with factory ammo, but I caution you; top end reloads can get very unpleasant…

I have to say that I do like the No 1, as I do not have a problem with single shot rifles and there’s the rub, as you really do need to consider if one round at a time is enough for you. The only thing that really changes with the different models/calibres is weight and barrel length and in more normal calibres they are every bit as capable as a comparable bolt-action.

Perhaps one of the better choices for the UK is the Varmint, as here a single shot action is less of a concern. So something in 204 Ruger, 223 Rem or 22-250 might really suit!

Modern/classic design
Super strong action
Is a single shot for you?