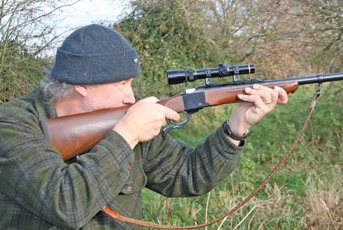 I don`t know what it is about Ruger’s No.1 single shot rifles but I have always loved them and owned quite a few from .14 Walker Hornet right up to .458 Win Mag versions. Its reputation is that of a reliable and classic design that harks to a bygone age where single shot rifles were king and the pace of life was much slower. I know they are not for everyone, but if you are a little more discerning and value the true essence of hunting; the No 1 is a beautifully crafted and great looking gun especially in its Tropical format.

The Tropical is available in some impressive big game cartridges such as the .375 H&H, .458 Win Mag, .416 Rigby, .458 Lott and even the .405 Win and 9.3x74R. More recently it was offered in the old fashioned .450/400 Nitro Express so combining a great old calibre with a classically-styled rifle made to modern tolerances.

.450/400 Nitro, I hear you say, will it knock your block off? Well it’s actually a great all rounder capable of being reloaded according to the species you hunt. It is not you’re every day cartridge I grant you, but having tested it for a year now the accuracy impressed me into thinking it would make a great woodland stalker.

The Ruger No.1 uses a 19th Century falling block action that gives a very strong lock up not dissimilar to the old

English Farquharson action rifle. Bill Ruger (Strum Ruger Inc) saw a gap in the market for a quality single shot so in 1967 he introduced the No1 and never looked back!

The action sees a vertical sliding block set in a compact receiver. Thus a 24” barrel comes up quite short on overall length when compared to a traditional bolt-action, giving compactness and quick handling. Operation is by an under-lever that locks into the trigger guard, there’s a latch on top/rear that must be depressed to allow the lever to be cycled. As you do so the block drops and you simply slip in a round into the chamber.

The extractor claw fits behind the rim of the case as it is chambered and closed. Extraction occurs as the block comes to rest when opened. The amount of ejection force can be varied by a small screw sited in the bridge of the forend.

The safety catch can be a problem on these large rimmed cases! Its location on the top tang of the receiver and its ‘raised’ profile often means the rim, especially the big old .450/400s catch on it as it’s ejected and stops it fully leaving the action. A little filing is in order, you don`t want a Cape Buff bearing down on you as you fumble the reload!

The trigger is ok and adjustable for weight of pull and travel, the factory setting was quite heavy at 5 lbs with a little creep. Even though the No1 use an internal hammer the lock time is quite long so proper follow through is in order.

The Tropical rifles are instantly recognisable by their enormous barrel profiles, looking like small cannon, I like that! Big calibres kick and any extra weight to reduce felt recoil is most welcome. It looks correct too especially with the traditional barrel band mounted sling swivel to stop that recoil cutting your hand if the sling was placed on the forend as on a normal rifle.

The open sights, bead up front without hood and simple folding rear, are very useable for big game as ranges are usually short and quick target acquisition is paramount. The rear sight is mounted on a steel quarter rib which adds to that authentic, old English look. Ruger have cut the rib to accept their dedicated rings for scope mounting and a set is included.

The classical lines of the butt are practical with a plain yet durable and more importantly strong construction of matt lacquered walnut and a thick rubber recoil pad. A .450/400 kicks and the low straight comb without cheekpiece allows you to ‘ride the recoil’ with control and the chequering on the pistol grip does not bite your hand. The forend has the traditional Alexander Henry style which gives that old fashioned look.

Accuracy can be excellent yet annoyingly contrary. Any problems that people have with these guns (although rare) emanate from the fact the forearm exerts a good amount of upward pressure against the barrel thereby affecting bedding and consistency.

This can be rectified in several ways; 1. Glass-bed the forearm to the forend hanger and then free float the barrel to allow it to vibrate consistently after every shot;  2. The amount of torque exerted on the forend screw can really affect performance. This is angled rearward so that it pulls on the forend against the receiver, if this join is not identical on each side when the screw is tightened then the forend sits at an angle and thereby pulls on the barrel to one side or the other causing inaccuracy or at least inconsistencies.

The optimum bullet is 400-grains which was handy as that’s all I could source from Reloading Solutions being Hornady and Woodleigh. You can either go for expanding soft or solids for dangerous game. Bullet diameter is 0.410” not .400 as the name suggests and Reloader RL19 powder seemed a good blend of load density and burn rate although Vit N165, H1000 or IMR 4831 can be good. I worked up from 74 to 82.5-grains of RL19 making sure the neck tension was crimped tight for positive ignition, very important, as was the use of Magnum primers.

The Hornady DGX gave 2030 fps/3661 ft/lbs and was the best load with this bullet and at 60 yards, typical ranges for this type of rifle, it grouped three shots into an inch nicely. The best groups went to the Woodleigh 400-grain Soft points with 80-grains of Reloader RL 19 giving 1974 fps/3462 ft/lbs energy with tight three shot clover leaf groups. Solid bullets were less accurate at 1.5 -2.25”; but a Cape Buffalo is a big target and penetration would be your main concern.

The No.1 - especially in Tropical trim - is very English for an American rifle. I suggest you to take your time over the shot and think a little more keenly about your placement and stalking skills. Ruger now has a new range of old British calibres such as the .303 British, 300 H &H and this .450/400 Nitro Express. Recoil is actually more than manageable and like so many larger calibre rifles offers really good accuracy.

The Ruger No 1H Tropical rifle and the .450/400 cartridge when reloaded can span game from deer to Cape Buffalo without punishing its owner and for little money when compared to a custom or vintage gun in this chambering. I will be stalking with the big No1 this year and I will report back. GM