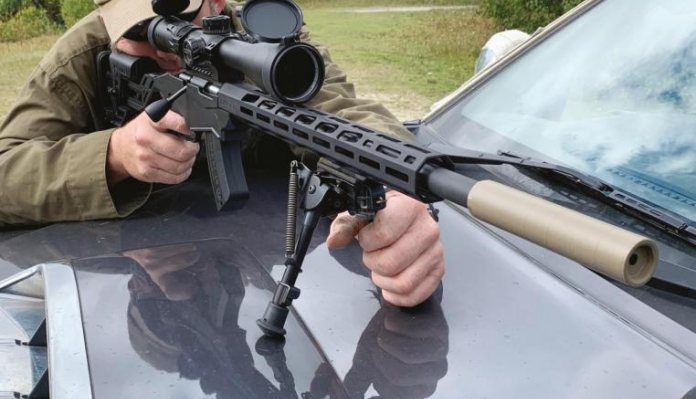 I first heard of and tested Ruger’s original, 22 Long Rifle (LR) Precision Rimfire (PR) rifle back in September 2018 and was more than a little impressed. This model is essentially a scaled down sibling of their well-regarded, centrefire, Ruger Precision Rifle (RPR), which I could best describe as a turn-bolt action in an AR15-like chassis. It offers a fully adjustable butt, extended bolt handle, free-float barrel in an M-Lok forend, adjustable trigger and has proved highly popular. The 22 LR version is; a good looking mini tactical/precision machine, with bags of potential. But after the test my one regret was that they had not yet offered a 17HMR (Hornady Magnum Rimfire) option, as that would have rocked!

Well, that has all changed, as Ruger have completed the triangle with not only the 17HMR, but also the venerable 22 Winchester Magnum Rimfire (WMR) cartridges. Apart from the new calibres and twist rates, nothing else has changed and, as we shall see, the rifle offers a few subtle features that make it just that bit more shootable, in comparison to more standard designs. I love the look and feel!

I’m a huge fan of the HMR and regularly use my Ruger M77/17 All-Weather out to 200 yards and it’s still a ½”-gun after nearly 10-years. I note this high end rimfire is now no longer available in HMR, but only 17 Hornet and the new 17WSM (Winchester Super Magnum). My rifle came with a 24” barrel, which was far too long, and I had it cut to 20”, with no loss of performance. The new 17HMR PR offers an 18” tube as standard, so I was a bit cautious on ballistics, but we shall see!

The RPR uses the action from Ruger’s American centrefire, but with a 5R-rifled barrel. The PR follows a similar route with their American Rimfire receiver, with a heavier, 18”, cold hammer-forged, 1137 alloy steel, Match-type tube with standard form, 6-grove, 1-9” twist rifling. It’s also threaded ½ x 28” UNEF, so no problems with a moderator. Given the original 22LR and the new 17HMR are 99.9% identical I appologise for repeating myself to regular readers’, but for others these facts must be detailed.

The stock, for the want of a better word, is made of a strong and stable, glass-filled nylon material, it only extends to the end of the action. Here, the free-float tube clamps securely to the barrel/receiver assembly, with the furniture bolting directly to the underside of the action. At the rear is a short, integral mounting stub that supports the adjustable elements of the butt system. The receiver sits on two alloy bedding blocks cast into the action void, so a firm fit. Ruger fit, as standard an AR-style pistol grip, but wisely the PR will accept any compatible AR15-type; Makes’ good sense!

The butt is adjustable for both length of pull (LOP) and comb height and does not fold. The aforementioned rear stub accepts the actual telescopic/adjustable elements. The rubber recoil pad is good and thick and shows a lower gripping hook/bag rider with Picatinny rail underside for a monopod, and there are ambi, QD sling swivel sockets. The comb is a horseshoe shape and, as well as vertical adjustment, also offers a bit of fore and aft movement too. Nice too, is the fact both axes are controlled by a single lever on the right, with LOP going from 12 – 15.5”; this, combined with the ability of the comb to move forward/back, will accommodate from small to large shooters easily!

The AR 15-like safety is set at an angle of 45º to FIRE and flips down to 90º parallel to the bore for SAFE and can be repositioned on the right side - nice touch. Feed uses Ruger’s BX 15 (15-shot) Magnum Rimfire (HMR/WMR) banana clip, or the original 9-shot, rotary version. The mag release catch is extended and positioned at the rear of the large and flared well. A Ruger Marksman Adjustable™ trigger is fitted, which can be set from 2.25 to 5 lbs, with the Allen key for the job stored inside a trap in the tang. To adjust, you must first remove the action from the stock. A point to note, before proceeding, set to SAFE, otherwise it will not come free. It’s best to remove the trap door on the tang compartment too, also when you put it back ensure its front lug engages otherwise it will fowl the bolt run. The trigger lever shows the Glock/Savagetype blade-in-blade safety that negates the risk of accidental operation, although it cannot account for operator-error!

The bolt has an extended handle with a large tapered knob, which gives a low lift angle and slick manipulation. One anomaly; is the fact you can change the cycling length (bolt throw) by removing a C-clip at the rear of the bolt body. With it in place, the movement stops just after the ejector blade at 1.5”; removed, it increases to that of a short action centrefire at 3”. Ruger did this for familiarity for full-bore RPR owners. I chose this position, as I have never liked the short movement and sudden stop of any rimfire’s throw. It makes no difference to feed or function. The bolt release catch is rear/left of the receiver.

Originally, Ruger fitted a one-piece 30MOA Picatinny base, which seemed a bit odd for the 22LR version, and required a scope with a fair bit of elevation correction to compensate. After zeroing, as I recall, there were just 10-clicks of movement left. I note on the HMR gun the rail is stamped 0 MOA, which I feel is more than adequate, given your choice of optic.

Originally, with the 22LR version, I was unsure, as it seems a bit over the top for a rimfire bolt-action, but its more radical looks won me over; as I’m a big black rifle fan. However, the more I played with it, the more I liked it. Everything is easy to do and well explained in the manual, so switching the safety from left to right takes minutes. Equally, adjusting the trigger is just a matter of twiddling an Allen key and it takes longer to remove the action, which is quick anyway. Butt adjustments are a doddle and I like the fact that you can move the comb piece forward, something few like it offer.

I soon had the butt adjusted with the comb pushed forward, to give an even cheek/head support, with the LOP more than generous for my long arms. I wound the trigger down to its minimum 2.25 lb pull and it offered a superb and crisp break, equally so at maximum weight, though a bit heavier. The inner blade acts like a guide, as that’s taken up first and you know the break is on the tip of your finger.

Without doubt, the BX15 magazine is far superior to the standard 9-shot rotary in terms of ease of inserting and removing and the 15-round payload offered will have its uses, might get one for my Ruger, M77/17 All-Weather. Same as I felt about the 22 Long Rifle version of the PR after some use, I’d swap the safety to the right side. The butt’s generous LOP and versatile positioning of the cheekpiece, combined with the practical adjustment system was a real boon too. The pistol grip was OK, but I would have fitted something deeper and fatter for a more assured hold. Trigger was great, with the short movement of taking up the inner, safety blade a good indicator that the crisp break was just a touch away.

Ammunition testing proved interesting and shows how brand-specific any rifle can be. Both Winchester loads were a wash out, with the Super X printing 2-3” groups and the BST even worse, so I did not bother chronoing them. I also had sporadic extraction problems, with fired cases left in the chamber, but not will all brands, so I put it down to ammo quality. Hornady came top with both the 17 and 15.5-grain loads doing a cool 0.5”, but with high extreme velocity spreads (ES). Remington shot a bit looser at 0.7” (still very good), ESs here were lower but still quite high. Compared to the Anschutz 1761 I tested in September issue; these figures were near double.

However, I do like the Precision Rimfire series in both 22LR and 17HMR, I have no doubt, that like my 77/17, the latter can reach out and touch small targets too.