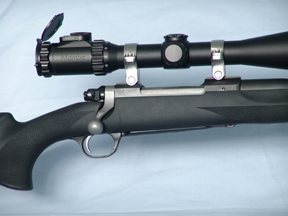 Now being officially termed as an ‘old git’ my memories of Ruger fullbore rifles go right back to the original M77 Mk 1. Action-wise it was/is a copy of the Mauser M98, which is probably the wellspring for the majority of US and European-manufactured sporting rifles. The large, external sprung extractor and twin lug bolt being a design that’s hard to beat.

Ruger, however gave it their own personal touches with an ambidextrous, tang-mounted safety catch, a cranked and scalloped bolt handle and cleaned up the bolt shroud. The resultant Mk I was a huge success for the company and in terms of popularity in the USA was right up there with Winchester and Remington. I owned the heavy barrelled M77 T (target), which was one hell of a shooter. My friend Edward Horton (Director) of Viking Arms Ltd (Ruger importers) still has a Mk I International with full-length Stutzen-style stock and rates it highly to this day.

Ruger are also experts in investment casting and believe it or not, all their fullbore and rimfire receivers are made this way. They also offer their own, dedicated scope mounting system that requires no rail or other separate bases, as they attach directly to the top of the action. Available in normal and high mounts, they include a set of 1” as standard with every rifle with the option of 30mm if you so desire as extra. Given the cost of fitting out say a Remy 700 with decent mounts this represents good value for money too.

Ruger eventually moved the M77 fullbore design forward into the Mk II; essentially the same rifle, but with a revised safety catch arrangement. Gone (sadly) was the tang-mounted unit to be replaced with a Winchester-type swinging lever on the right of the bolt shroud. This gives three position: forward – FIRE, middle – SAFE with bolt operation and rear – SAFE with the bolt locked. Not quite as fast or slick as the Mk I but the ability to unload in safe mode is certainly useful.

Ruger also took the opportunity to re-think some of the stock/model options with a black synthetic design that I have never liked, due to its permanently fitted stirrup swivels and horrible, dished-in butt section. The M77 T got a complete face lift with a new heavier, 26” barrel and a very nice, heavy laminate stock, which resulted in the Mk II VT (Varmint Target). On this model they also introduced a finish called Target Grey, which is a sort of alternative stainless. They also offer full stainless steel guns, which I always thought visually came off a bit flat looking and soon marked up. Naturally blue and walnut was also available. The Mk I and Mk II could only be filled through the action and showed a hinged magazine floor plate; to my knowledge Ruger has never offered a detachable magazine system in a centrefire bolt-action. The now obsolete 77/44 in 44 Magnum being the only exception, which was a bit specialised.

In the UK the M77 Mk II represented a solid and well built rifle at reasonable money, however - with the exception of the VT - the one gripe was the heavy trigger. From the box this was not the lightest thing around and certainly did affect performance. I currently own three Rugers; a VT in 204, plus 17HMR and 22 LR rimfires, all of which have had replacement triggers fitted.

This year Ruger announced that with the exception of a few models from their Mk II Specialist range - VT, Ultralight, International and Frontier, they were replacing the M77 Mk II series with the new M77 Hawkeye family.

I first saw the rifles at the IWA show and they looked just like the Mk IIs mechanically. However, the stock design appeared subtly different, and better for that matter, and I was also told that they now all featured the new Ruger LC6 trigger unit. LC standing for light and crisp! A wise move indeed, as in the US this seems to be the way forward with sporting bolt-actions. Savage started this off a few years ago with their Accutrigger, which offered a decent, factory-set unit on some selected models. They then put it on all their guns. Remington followed suit this year with their own improved mechanism the X Mark Pro Trigger, which like the Accutrigger really makes a difference. So it would seem logical that Ruger has done the same and it’s likely that Browning will also follow suit…

You will see the new Hawkeye range covers as much ground, if not a bit more than the M77 Mk IIs did, as follows:

Most exciting are the Alaskan and African models in the new 375 Ruger chambering. The former is a 20” with Hogue, rubber, over-moulded stock and the latter a 23” with traditional walnut. As well as wood/blue Ruger offers two versions of the Standard in 270 Win and 30-06 Springfield with Hogue stocks in a choice of green or brown. Initially I was sent a 243 stainless/synthetic for a brief look, which proved to be a good rifle and certainly a cut above a comparable Mk II version in finish, build and performance. This had to go back all too quickly, but I also asked for a 25-06 Standard, which I chose for two reasons. Firstly the calibre is an interesting one and second this rifle shows a slightly heavier barrel, as perhaps befits the calibre. A friend of mine has a VT in 25-06 and swears by it. I will also be getting the African later, which should prove to be a highly cost effective big bore for those that need this sort of heavy artillery…

The Standard is a true wooden gun, showing the re-designed stock with its slim and flexible forend. As it sits this is not a rifle to put a bipod on, though QD studs are fitted front and back. Initial testing was done off a range bag to ascertain performance. At a latter date I borrowed a Hogue (long-action) rubber over-moulded unit, which free-floats the barrel and provides a lot more to get hold of. The new Ruger synthetic is actually quite good and though tight up on the barrel, it’s pretty rigid in the forend and there’s even enough meat to allow a semi free-flat to be carried out.

The first aspect of this rifle you notice is the finish, which I really like, as opposed to the shiny blue of the Mk II. Ruger describe it as Hawkeye Matte Blue, but it’s a flat black that’s nicely counter pointed by a matte stainless bolt. The stock is subtly different with a more rounded shape to the sides. The timber is walnut and quite nice too, with aggressive chequering panels on the side of the forearm and the pistol grip. Length of pull is not bad, which including the slim, red, rubber recoil pad gives a measurement of 13 ¾”.

The action is standard M77 with the 3-position safety catch and bolt release lever on the rear left. Likewise the hinged floor plate, though cosmetically Ruger has their eagle logo laser-engraved on it, which again is a nice touch. The 24” barrel on this 25-06 shows a medium/tapered profile and, though not as heavy as that of the VT, is nonetheless good and rigid.

Most noticeable is the new LC6 trigger. It looks little different to the standard unit but this one broke at a crisp and readable 3 lbs with virtually no creep. I like them set a bit lighter, but from the box I have no complaints as it’s a vast improvement over the Mk II unit. Taking aim and keeping the cross hair on the aiming point whilst you take up the weight and make the shot was not a problem. So most useable from the off and in truth no need to spend money on getting it sorted.

The Hawkeye was shot off a range bag with a butt support and I used a number of brands of ammo and reloads, which included Remington 100 and 120-grain SP, Winchester 87-grain Ballistic Silver Tip and Federal 100-grain Ballistic Tip. Reloads used Sierra 100, 117 and 120-grain soft and hollow point bullets. The scope was a Swarovski 3-10 x 42 A Habicht, which offered a #4 reticule at a latter date I fitted the new MTC 3-12x44 Mamba.

Most noticeable was that the Ruger did not like any of the 100-grain fodder, either factory or reloads. Best results were split between the 120 and 117-grain Sierras, which were both printing cutting/touching groups at 100 yards, which I thought pretty amazing for a standard M77 action. Without doubt the Hogue stock and LC6 trigger made the difference, that and the medium weight barrel too. The Winchesters shot about ¾”, which was not too bad given they were the lightest bullets of all.

In terms of calibre, I suppose you could liken 25-06 Remington to a hot 243 Winchester. Capable of throwing bullets from 87 to 120-grains at better speeds with more energy. Plus the long slim shape tends to penetrate well. It is however a bit of a barky calibre and I’d get the muzzle threaded for a brake or moderator. Also bullet selection as to species is important, as the 87-grain Winchesters were cracking on at around 3400 fps. This makes for a superb, flat-shooting fox gun, but on a deer carcass damage might be a little extreme.

There's not really a lot more to say. In my opinion the new M77 Hawkeye is certainly an improvement on the old M77 Mk II. The wooden stock is very much as expected and where this my gun, then something from Hogue or H-S Precision would be fitted. General build is better and slicker, but what makes the gun is the new LC6 trigger. As the plain truth is; if you can keep the sights on the target and consistently and easily release the shot - that’s what really counts. So respect and kudos to Ruger for making what is definitely a better mousetrap…

I would recommend that you go on the Ruger website to see what the Hawkeye range has to offer in terms of calibre, barrel length etc.

Though I do look at custom guns from time to time the bread and butter of the hunting gun tests, and what people mainly use, are without doubt standard factory models. I was talking to a custom gunsmith I know and he said that he would not touch a Ruger as they do not shoot and are hard to make so. I felt this was a bit snobbish and dismissive, as if this 25-06 Hawkeye can produce what is in effect ½” groups at 100 yards then it has a deal of potential. Imagine performance with a better stock and synthetic bedding?