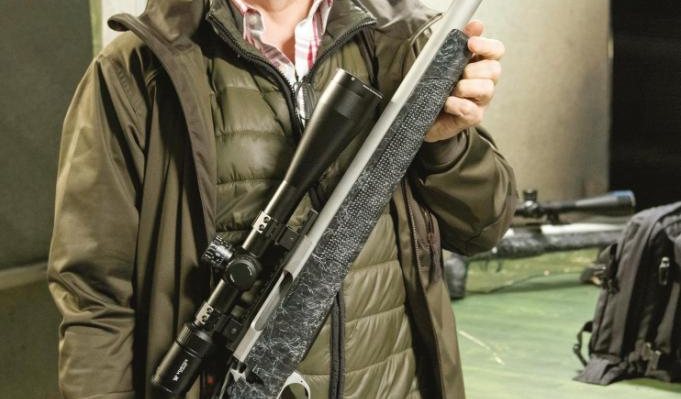 Plenty of UK shooters could reel off the names of half-a-dozen Italian shotgun manufacturers from a mental list including Benelli, Beretta, Bettinsoli, Breda, Fabarm, Fausti, Franchi, Guerini, Marocchi, Perazzi, Rizzini, or Zoli. The same people would probably associate these brands with advanced design, high manufacturing standards and attractive styling. But try the same trick with rifles and many will struggle to identify a name that ticks all these boxes. You have an advantage here, of course, because having read the title of this review, you know that name is Sabatti.

I recently got the chance to find out more at first hand, thanks to an invitation from UK Distributors Range Right to visit Sabatti’s HQ, deep in the heartland of Italy’s gunmaking heritage: Gardone Val Trompia. Once you leave the motorway near Brescia, the road snakes north into the foothills of the Italian Alps and up into a valley that is home to almost every Italian maker you’ve ever heard of, and plenty more you haven’t. Your drive takes you past a stock-maker’s yard-full of blanks seasoning in the open air, under a bridge that links the vast Beretta factories on either side of the road, and finally, up a left-hand fork to a big yellow building bearing the Sabatti name.

The focus of the visit was Sabatti’s latest rifle, the Tactical EVO. More on that later. Truth is, the real value of these visits doesn’t reside in the featured product alone, but in discovering the thinking, the values and the history behind its development. It answers the question, why is this particular company making this particular product? And why is that a good thing? The answer is often a surprise.

In Sabatti’s case, I had no idea that the company’s history stretched back to the early 1700s; or that, unlike most icons of British gunmaking, it isn’t just a name that’s been sold on to one entrepreneur after another, but a genuine family tradition. I didn’t know either that, as a major producer of receiver forgings and locks, they had been pivotal to the success of some of the region’s most famous firms. Or remain the principal barrel-makers for the northern Italian gun trade; or that they supply barrels to certain prestigious makers on the other side of the Alps. I don’t think I appreciated either how diverse their own gunmaking business is. This is a firm that is capable of making everything from a classic double rifle to an AR15, and has been making bolt-action rifles for over half a century.

The last few years have seen rapid innovation in Sabatti’s bolt action designs. First, they diversified their tried-and-tested Remington-style Rover series (widely marketed under the Mercury brand), offering it in a comprehensive suite of versions. Then they made a move into Sauer/Blaser territory with the Sapphire, an all-new model that featured a switch-barrel system; an aluminium receiver with integral Picatinny rails; a 3-part, 3-lug bolt that allowed for the perfect fit and temper of each part, interchangeable handle styles and a 60º lift; swappable match or set triggers; and new hardening processes that increased the strength of the bolt/barrel interface to give extra protection against over-charged loads.

Sabatti now entered two fast-moving sectors, forging collaborations with two artisanal firms, tactical specialists Victrix and target specialists BCM Europearms. The former collaboration generated new expertise in producing chassis rifles, whilst the latter a brand-new competition-oriented action that debuted in the TLD, which combines an F-Class layout with a proprietary detachable magazine milled from tempered steel. The most distinctive innovation in the new action, however, is its suspended action, bedding system, in which the receiver is held clear of the stock by a domed rear cradle and a combined front V-block/recoil-lug.

Radical too was Sabatti’s approach to pressure. Mindful of the tendency of competition shooters to push the envelope when hand-loading, they select and treat their steel to take pressures that are much higher than standard. The idea; they might fail but won’t shatter. To complement this, they designed a new ‘guillotine-type’ extractor made from 17-4PH steel that resists blow-out at what is usually a point of failure.

Additionally, bolts are chromed for smoothness and speed as well as protection against wear and corrosion. Finally, shooters can choose between a 3-lever Match trigger or a new 2-stage (DSMT) design. Having developed these features for the TLD, Sabatti then incorporated them into a new chassis rifle, the ST18.

Also noteworthy are Sabatti’s attention to the quality, composition and treatment of their stock materials, whether for aluminium chassis, laminate target or polymer hunting and tactical applications. Their understanding of the importance of stock fit is reflected in the presence of height-adjustable combs and spacer-extendable butt pads on all their target and tactical guns and many of their sporters.

So, where does the new Tactical EVO fit into all this? As the name suggests, it represents the evolution of the competition action. Thus, all the previous elements are present: suspended bedding, extreme pressure resistance, enhanced extractor, 3-lug, 3-part chromed bolt, detachable box magazine, and specific trigger options. At the same time, they have refined the geometry of the bolt and the trigger components to make operation even smoother and more precise, fluted the bolt, and put a 5/16” thread on the handle to take aftermarket knobs.

Sabatti are also making the Tactical EVO in two variants: standard, optimised for traditional target competitions and a US version, optimised for more dynamic tactical-style shooting. The former is a full kilo heavier, due to its barrel dimensions and the use of a denser nylon/fibreglass polymer that adds 400 grams to the stock. It also mounts the more sensitive 3-lever trigger, feeds from their milled, metal, anti-shatter magazines holding 3 or 6 rounds, and features a low-profile release in the front of the trigger guard. By contrast, the US gun takes AICS-compatible magazines, shows an extended release tab for faster operation, and has front and rear QD sling sockets on both sides of its lighter polymer furniture. Stocks have an external surface coating designed for grip and as abrasion resistance as much as for looks, although the black/ white-spider-web and sand colour-schemes make a good impression too. A final note of detail can be seen inside, where pillars are moulded into the reinforcing bars of the forend, ready to accept bipod studs, etc.

What sets all Sabatti barrels apart, however, is their proprietary Multi Radial Rifling (MRR). Instead of using conventional lands and grooves, MRR impart spin to bullets using a rifling twist with a cross-section resembling a rounded-off hexagon. The resulting lack of sharp edges means that bullets are not engraved by the rifling. Consequently, drag is minimised, so improving ballistic coefficients (BCs), obturation is made more effective and fouling reduced, so maintaining consistency over long shot strings and requiring less cleaning effort. There are other ballistic benefits too, as the form is more tolerant of ammunition concentricity errors, even correcting these as the bullet enters the bore. Finally, it’s ideally suited to hammer forging, because blanks can be formed to a smooth mandrel with tremendous consistency and less working than with conventional rifling designs. Effectively eliminating quality variation. Simply put: every MRR barrel is good.

To put the new Tactical EVO to the test, we headed for the Galleria del Tiro at Lograto near Brescia, an impressive facility that incorporates a unique 12-lane 300m underground range. There are also 10m, 25m and 50m indoor facilities, plus a gun shop, a hunting agency and of course; a pizzeria!.

Settling in at the bench, on that range, with a .308 in standard format and an ample supply of Fiocchi Perfecta 175-grain HPBT OTM match-grade ammunition was a moment to remember. It took me a little while to adjust to the combination of a Harris bipod and a leather rear bag; but once I had my stance, my seat and the comb-height properly adjusted, I could begin to appreciate the rifle. Feeding was flawless, the bolt super-smooth, and the trigger totally crisp and predictable. The barrel proved tolerant of extended strings, too, showing no effects downrange, even after it had become too hot to touch. We weren’t able to recover targets for measurement, but my best 10-shot group was the size of the X-ring (about 0.5 MOA).

Visiting Sabatti has transformed my appreciation of the company. As for the Tactical EVO, shooting it indoors has left me eager to try it out at longer ranges. And there’s something very important I haven’t mentioned: you can buy a Sabatti Tactical EVO for just £1,500. Many manufacturers claim to deliver custom performance at an off-the-peg price, but it looks to me like Sabatti have done precisely that.