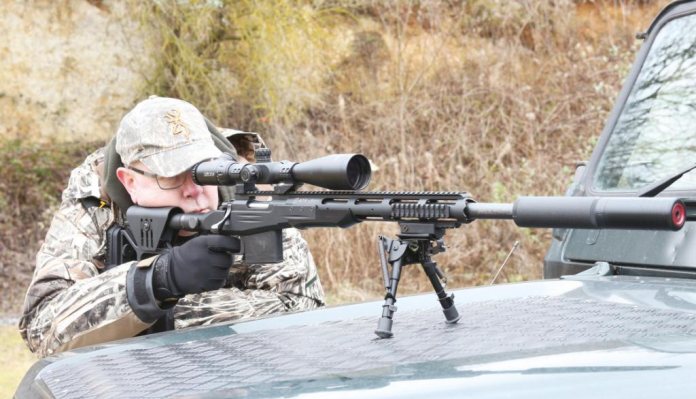 Sabatti, now there’s a name that brings to mind a rather basic copy of the Ruger 10/22 (The Sporter); seen one, shot one- nothing wrong with it but you know? It’s also a name that has had little exposure in the UK. However, a look at their website shows a wide range of firearms - double, single and combination guns, bolt-action centrefires for target, hunting and tactical use. They have now been picked up by Range Right and I checked out their product line at IWA last year and it looked interesting!

Last year, in the Czech Republic, I got to shoot a rifle called the Mercury, which is in fact a Sabatti Compact Scout and it was a nice piece of kit. The action is heavily based on the Remington 700, as there’s no mistaking that 3-rings of steel build approach and the 2-position rolling safety rear right of the receiver. The major differences are a standard extractor claw and a bolt release lever at the left of the action. So we are starting off with a proven design, which is the base for their Rover series of centrefires.

However, what Jake Peters of Range Right sent me was something rather different, in the form of the STR (Sabatti Tactical Rifle), which just oozes long range shooting potential! Most obvious is the big, heavy profile (0.8” at the muzzle) 24”, hammerforged barrel. The tube is threaded 5/8 x 24” and complete with a radial-type brake. Most interesting is that Sabatti has dispensed with the normal land and groove rifling form and instead uses what they describe as Multi Radial Rifling (MRR). Essentially it follows Sir Joseph Whitworth’s original polygonal principle that dispenses with the traditional, sharp edged lands and grooves of cut or button rifling, to offer a more rounded form.

The idea has been around since 1856 and has swung in and out of favour. It’s said to give a better gas seal, improved velocity, is kinder on the projectile, easier to clean and increase bore life. Which should add up to improved accuracy and performance. Detractors say that being hammer forged, it needs careful stress relieving to achieve maximum accuracy and is not as good as cut-rifling. However, and being analytical, you could argue that regardless of traditional or Sabatti’s MRR rifling forms, that huge free-floated barrel is going to be so rigid as to shoot regardless. We shall see!

Sabatti has this to say about it: “With Multi-Radial barrels two different radiuses alternate in order to positively grip the bullet geometrically without submitting it to extreme stress. Group concentration is substantially improved due to the extremely tight tolerances that can be kept while manufacturing MRR barrels. As a matter of fact it lends itself perfectly to our cold hammer forging. The resulting rifling profile improves consistency and overall barrel quality is increased. The specific geometry of the forcing cone makes it possible for the chamber neck and free bore to guide the bullets into the rifling more precisely and steadily than with the traditional systems – the bullet matches the barrel axis in the best possible way thus reducing the fliers.”

In the last few years, we have seen a rise in off-the-shelf tactical/target guns, with Ruger’s Precision Rifle being a good example, the STR very much seems to fit into this marque!

That big heavy barrel, sweet trigger and new rifling is all to the good but you still need a good handle and Sabatti picked the Victrix Arms FMRC (Fully Modular Rifle Chassis) for the furniture. It’s a typical example of a no compromise design, with no thought to cosmetics, but a high priority for fit, adjustability and shootability. The barrelled action sits in a machined, aluminium alloy chassis with a 15.5”, rigid free-float, and ventilated forend tube. The side-folding butt uses an M4-lenght AR15 buffer tube, to which is attached a horseshoe comb/cheekpiece with a separate butt assembly yoke bolted underneath.

Adjustment allows you to alter the comb height, length of pull (LOP) and recoil pad height for that exact fit. If that’s not for you, then you can simply remove the M4 buffer tube and fit a longer A2 type and maybe opt for a Magpul PRS (Precision Rifle Stock), Luth –AR or a similar full-length adjustable butt. Though mine did not have it fitted, there’s provision for a short length of Picatinny rail under the yoke that would allow the use of a rear monopod.

As standard, the STR comes with a 2-piece angled 20 MOA Picatinny base, which extends to the full length of the float tube at 12 o’clock. The 20 MOA down-bubble is useful for true long range use, but you do need a commensurate optic with enough adjustment to cope with zeroing. Up front, at 3, 6 and 9 o’clock, are three shorter sections of rail for lights and lasers etc. Unusually, there’s a small plastic forend, I assume for offhand work! From its plastic carry case the rifle comes with a Hogue, rubber, over-moulded AR15 pistol grip. This configuration allows you to fit any compatible AR handle too!

The trigger guard void is big and deep, so no problems with gloved fingers. Feed is from a 6 + 1, rubber-coated box mag with a press-forward release catch at the rear of the well. The STR is no lightweight, tipping the scale at around 14 lbs un-scoped, but it is what it is! My tester came in 308 Winchester with Sabatti quoting a 1-12” twist rate, which I thought a tad slow given most longer-range work is done with heavier weights starting at 165/168grains and above, which is the realm of faster rifling. We shall see!

Sabatti describes the trigger mech as a 3-lever design and make no mention as to adjustability. It offers a medium/wide slightly curved blade about 1/3rd of the way forward from the rear of the guard, which in combination with the pistol grip sets the finger position easily for a first pad contact. It breaks at a crisp 2lb with no creep at all, and though a light release it’s totally readable. The safety pushes forward to FIRE and reverses for SAFE where it still gives bolt operation. The action cocks on opening and the bolt lever is a long tear drop style that offers plenty to get hold of! Even with its full Picatinny scope rail, there’s plenty of room underneath, aided by a generous ejection port for single loading etc.

For the test, I fitted a Harris BRS bipod on a Picatinny adaptor and Range Right provided a Konus-Pro 6-24x52 F30 scope in the first focal plane. I set this up in Sportsmatch, reach-forward mounts. Fully bombed up, the STR was going 16 lbs+, so a heavy but stable package. Ammunition went to three types/weights Hornady 150-grain GMX Superformance, GGG’s new 168-grain HPBT Match and Hornady’s latest 178-grain Precision Hunter that uses their new ELD-X bullet, which is supposed to be the ‘mutts nuts’! I chose to use a moderator as I would be outside and wanted to keep it as quite as possible. A call to UK Custom Shop got me a 5/8 x 24” bridge (muzzle adaptor) and .30” cal baffle stack, which I fitted to my modular system Wildcat EVO 10. Sorted!

The STR comes together well and when adjusted feels like part of you. Unfortunately, the weather did not allow pushing the range due to rain, but if results at 100m were indicative of ability, then I have few complaints. I started off with the 168-grain GGG, which was quoting 2641 fps with the rifle achieving 2658 fps, with an extreme spread (ES) of 26 fps and a 0.5” group. The Precision Hunter states 2600 fps and was giving 2547 fps with a 49 fps ES and .57” group; again pretty good. Best, and most surprising of all, was the 150-grain Superformance, which was cutting one-hole groups little larger than .35” with a quoted 2940 fps that translated into a real-time speed of 2934 fps and an amazing ES of just 15 fps. Damn rifle shoots, no doubt!

These figures lead me to conclude that the 1-12 twist does suit the lighter bullets better, as the GGG shot marginally tighter than the heaviest Precision Hunter load, though neither was bad in terms of accuracy potential. As to the efficiency of the MRR rifling, well, it certainly suited the GMX’s non-lead, monolithic build, which is not always the case with conventional forms. But a back to back test with conventional cut rifling would tell the truth. However, if the STR can shoot that way then I am most impressed and all for the thick end of £2000, which and by comparison to other tactical-type guns is a steal; especially when you consider its performance potential!