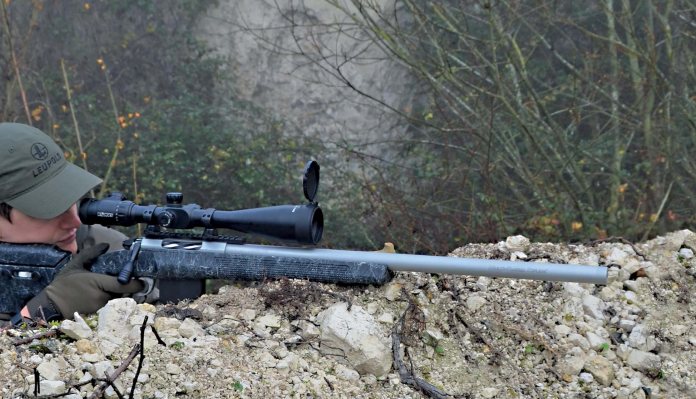 Over the years we have had a variety of Sabatti rifles appear in the pages of the magazine. Most recently was the ST-18, which I tested back in the October 2020 issue. An important test, as at the heart of the rifle was Sabatti’s latest action. Performance straight out of the box was impressive and as soon as I sent it back to the distributors, Range Right Ltd, I asked if I could look at the new Tactical EVO.

The EVO comes fitted with a substantially built, reinforced fibre glass-filled nylon stock. It shows a black/grey finish with white web and the surface includes a grippy, scratch-resistant coating.

Starting from the front, the overall design is clearly target-oriented as the stock shows a long forend with a wide, flat underside that measures 1.7” across. This makes the rifle ideal for use with a mechanical/adjustable front rest or shaped bag. There is also no sling stud fitted which would interfere with the movement of the forend in the rest during recoil. For the same reason, Sabatti has left the underside smooth, only adding a panel of good quality convex dots/stippling on either side of the forend.

The vertical, ambidextrous pistol grip shows a nice palm swell on both sides, plus it features the same stippling as the forend. It fills the firing hand nicely, the shape and large thumb shelf promoting a thumb up position rather than a wraparound hold. The reach to the trigger has been well judged and I found the design very comfortable in use.

The butt includes an adjustable comb which is 1.5” wide and connects with the stock via three metal rods. It includes a cutout for easy bolt removal and the height is altered via a horizontal thumb wheel that can be manipulated from either side. It provides approx 1.7” of precise vertical adjustment and is can be locked using the two black thumb wheels on the right-hand side.

At the base of the butt, there is a shallow hand stop and a generous 4.5” long, flat underside for use with a rear bag/rest. It also does not include a sling stud. There is a 0.6” thick rubber recoil pad giving a total length of pull (LOP) of 13.5”, however, this can be increased using the 0.5” plastic spacer provided.

With the barrelled action removed, the strength of stock soon became apparent, along with the quality of the inletting. There was ZERO flex along its length, no doubt due to the multiple horizontal and vertical reinforcements under the barrel channel. I also noticed three pre-drilled pillars (not threaded) that look ready to receive a sling stud if you fancy getting the drill out.

There is precisely machined, reinforced slot for the threaded recoil lug, which accepts the front action screw. The rear of the action sits on top of a large improved for the EVO to further enhance performance.

The internally adjustable, 3-lever, match trigger is excellent. It shows a plain, 5mm wide, black curved blade and the pullweight straight from the box was only 1 lb 10 oz. There was no creep and the break was crisp and repeatable. It is housed in a medium-small, metal trigger guard (so thin gloves only) which also incorporates a rather heavily sprung mag release catch into its front face. In use, I was not a fan of this design as is it a little too close for comfort to that very light trigger. Also, it makes one-handed mag swaps a tad awkward. Not such an issue when the rifle is supported in the prone position but definitely not helpful in any other position, given the rifles 13.7 lbs (naked) weight!

The 2-position safety catch is located rear-right of the action. The lever pushes FORWARD for FIRE and to the REAR for SAFE. There is a large, black cocked action indicator at the rear of the shroud, which can be seen and felt.

My test rifle came with a 6-round, single-column magazine which had enough room for a 6.5 Creedmoor round with a 2.950” cartridge overall length (COL). However, Range Right advised me that the latest UK version will come with a AICS compatible 7-round magazine as standard instead. This is good news.

I fitted a Konuspro-F30 8-32x56 scope with QD mounts which Range Right supplied, and with no attachment point for a bipod, I used bags for support. The barrel diameter would normally preclude the use of a moderator, but luckily for me, my Wildcat Predator 12 fitted nicely, allowing me to test the rifle with and without a moderator.

Ammunition was provided by Raytrade UK and included some 140-grain Remington Premier Match and Barnes Precision Match. I also dug out some Sellier & Bellot 140-grain soft-points and rustled up a reload using 139-grain Lapua Scenars and RS62.

The Remington ammo set a benchmark, printing several 0.50” groups at 110 yards. The Barnes managed 0.54” and the S&B achieved 0.51”. Unsurprisingly, my reload won the accuracy battle when I managed a 5-shot cluster measuring 0.37”. Not bad!

My visits to the range highlighted that the good ergonomics and excellent trigger made it easy for me to tap into the rifles very consistent performance. The EVO printed tidy groups with all the ammo used, which is rarely the case when testing a rifle! It behaved well unmoderated, the heavy barrel allowing me to shoot some really long shot strings, but it is worth noting that I managed my tightest group with the Predator 12 fitted. In truth, I was expecting sub 0.5” groups from the factory match ammo and for the barrel to generate slightly better velocities given its length and rifling. However, my reloads showed some serious accuracy potential and I know that with further tinkering, plenty of extra speed could be achieved.

I was a bit perplexed over the use of the word ‘Tactical’ is the rifles name, when it is clearly aimed towards target use. I still tried manoeuvring/using it out in the field, just to be thorough, but I quickly confirmed it belongs solely on a bench!

To sum it up, the EVO is a very well made target tool with no signs of scrimping anywhere, which is nice to see and helps inspire confidence. A valuable trait in any rifle. It provided solid performance and was a pleasure to use.