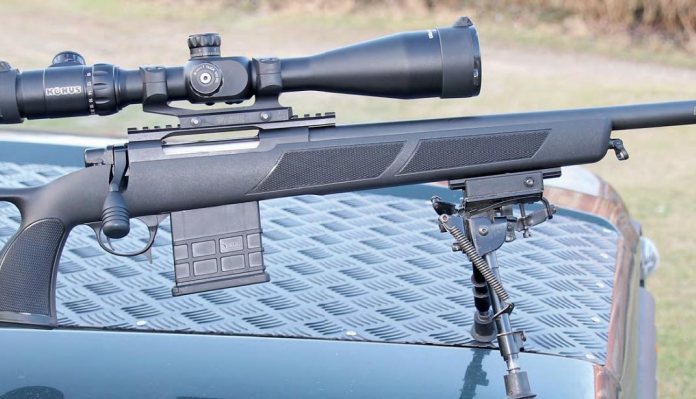 In 2017 you might well remember I tested Sabatti’s STR (Sabatti Tactical Rifle), a video of which is also on the Gun Mart TV website. Though Sabatti is an established brand in Europe and America, in the UK the name meant very little, with many not even knowing that they made rifles. This changed a couple of years ago with the announcement by Range Right that they had taken on the importing and distribution.

They offer a line of hunting and sporting rifles under the generic Rover name in various options, with an action based on the Remington 700. Following on from the STR is another new model; the intriguingly named Tactical Scout.

Last year in the Czech Republic I saw a scout-type rifle called the Mercury, closer inspection showed the barrel stamped up Compact Scout. This was a Sabatti Rover and very nice too with twin Picatinny rails on the receiver and barrel, along with iron sights, a muzzle brake, synthetic thumbhole (TH) stock and 5-round box mag. It’s likely this light sporter and the STR were the design inspirations for the Tactical Scout, as it offers common features.

The Tac Scout is no lightweight; OK it’s not the 14 lbs (un-scoped) like the STR, but at 11.5 lbs less glass etc it ain’t Twiggy either! The stock is the first thing that catches the eye, as it’s a synthetic, TH build, which I always like, but beefed up with a heavy, rectangular forend, long square butt with adjustable comb and length of pull (LOP) spacers. The material is solid with no twist or bend and it free-floats that heavy barrel easily.

Taking it apart shows a good tight action void/inlet with a proper recoil lug and pocket. It’s not bedded, but I got the impression it doesn’t really need it! There’re two fixed sling swivels under the butt and in the tip of the forend and a short length of Picatinny rail underneath.

Come on; what about a couple of QD studs too, as that would mean not having to use a bipod adaptor? I mentioned this to Luke Stares of Range Right and he said that could easily be done!

One of Sabatti’s unique selling points is their approach to rifling.

They have dispensed with the normal (cut or broached) land and groove rifling form and instead use what they describe as Multi Radial Rifling (MRR). Essentially its polygonal shape offers a more rounded form. It’s said to give a better gas seal, improved velocity, is kinder on the projectile, easier to clean and increases bore life. Which should add up to improved accuracy and performance.

Detractors say that being hammer-forged, it needs careful stress relieving to achieve maximum accuracy and is not as good as cut-rifling. I care not, as if it shoots tight groups it’s doing its job!

Feed is from a Vitrix, single column, synthetic magazine, we are told it’s a 10-rounder, but I could not get more than eight in and that was a push! It’s retained in the well by a push-forward lever on the front of the trigger guard. Changes require two hands, as the mag box does not fall free when empty; but that might slick up with use.

The bolt is near pure Remy 700, with twin, forward lugs, enclosed bolt head/face and a plunger-type ejector, though uses a broad claw-type extractor. It cocks on opening and there’s a large cocked action plunger at the rear of the shroud. The release catch is rear/left of the action and presses in. The handle is cranked like a 700s’ but in this case, has a useful, enlarged and lengthened knob, which aids operation. The safety is a 2-position roller-type located rear/right of the action: forward to FIRE and rear for SAFE with bolt operation; nothing to see here!

The trigger looks like a Remy unit too, though only appears to have one adjuster. However, it broke at a reasonably crisp 3 lbs and I was happy with it and its curved blade gave a nice finger fit, though I would have liked it slightly wider!

Calibre-wise, the Scout is offered in 223 Rem, 6.5x47 Lapua, 6.5 Creedmoor, 308 Win and 300 Win Mag. I’m surprised they went for both the 6.5s, as the Creedmoor is doubtless the more popular these days! I could be wrong, but the receiver looks to be a long action build, as the ejection port is big, and the bolt throw long! Doubtless done for the 300 Win Mag, It looks like they use a common magazine, as the cartridge overall length appears to be long enough! Barrel length options are a bit confusing, as I was on Rifleman Firearms website and they show all at 24”. Sabatti’s website was less than helpful, as they didn’t even mention the Tac Scout. I rang Luke at Range Right and he went and measured their guns and came back saying all calibres are 20”! Fine for a 308 or 223, but too short for the two 6.5s and certainly the 300 Win Mag!

The receiver is finished off with a 7.5” Picatinny rail with 20 MOA down bubble, to which I fitted a KonusPro 6-24 x 52 F30 scope in a 30mm Warne, one-piece mount. Up front, in an adaptor, a Harris BRS bipod. I shot the rifle with and without the muzzle brake, to see what difference it made and used a Wildcat EVO 10 reflex moddy from UK Custom shop. The EVO is a flexible option, as you can buy extra adaptors (spiders) for individual thread forms, along with calibrespecific baffle stacks, so one moddy can be tailored to many different rifles and calibres.

As the Tac Scout is very much a range rifle in the UK and with its 1-11.5” twist rate, I figured it would like 150/155-grain bullets the best. So, I built two reloads, the first the new Hornady 155-grain ELD Match over 44-grains of Vit N140 and that old standby the 168-grain A-MAX run by 42-grains of N140, both loaded into new PPU brass! The one factory load was Hornady’s 178-grain ELD-X Precision Hunter, which does seem to like tight twist 308 barrels.

Though feeling handier than the STR, the Tac Scout is really in the same class, as fully bombed up it’s heavy and more a prone/ supported option. Set up is easy, maximum LOP is 14.25”, which can be reduced by removing the two 0.5” spacers to 13.25”. I kept it at maximum! The comb is controlled by twin thumb wheels and takes seconds to get the right head position. Bolt operation is smooth and easy, with the longer handle needing very little effort.

Two aspects came to light on the range test. First, fully bombed-up the top two rounds are tight to feed from the magazine, but I reckon that would ease up. Second, the receiver is long action, which was attested to by the ejection path, which was not that positive. Here, the case comes out on the claw and can angle sideways too much, so drops off; this is the same with the 223 Rem barrel on my Mauser MO3. The answer is fast bolt operation; just be aware!

Performance was interesting; the 155 ELD Match reload was little short of amazing, with tiny one-hole groups, little bigger than a single bullet hole. The A-MAX were around 0.5”, certainly excellent, but noticeable in their size compared to the 155s. The Precision Hunter, proved a bit too heavy, printing a solid 1”, which was near identical to the result I got with it in the STR. It’s a simple case of too heavy for the twist! Velocity-wise, the 20” tube favoured the 155s at 2780 fps, the A-MAX were 2557 and the Precision Hunters 2591.

Now the mad bit; given the STR costs £1995, the Tac Scout is going for a quoted £899, but a look around the websites shows prices ranging from £799 to £910. In truth and apart from the barrel length and stock it’s pretty much the same gun, though I do prefer it over the longer/heavier STR! In this new era of chassis system and tactical/ precision rifles it’s going to make a lot of range shooters very happy!