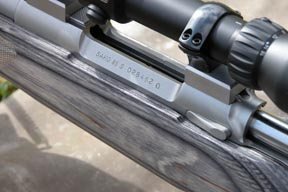 I have to admit to not having a lot to do with Sako rifles, as the last fullbore I looked at was the old Model 75 in its synthetic stock with rubber gripping panels, which did impress. However, the name has always been associated with quality and I know a lot of shooters who own this brand, and when looking for a rifle will immediately go there. So I was pleased when UK importers GMK Ltd sent me an example of the 85 -the Hunter Laminated Stainless.

Externally the 85 looks little different to the older 75, the major visual change being the lack of key lock system that the latter offered. Thankfully the fad of being able to disable your rifle seems to have ended, which is a blessing.

First impressions were favourable and I have to say build quality and finish was good. The stock is a grey/black colour and the layout is excellent. The forend tapers slightly yet gives enough to get hold of, the butt shows a straight comb and low (shadow line) cheek piece and again is of acceptable width to be comfortable. At the back is a rubber recoil pad and QD sling studs are fitted front and rear.

Most impressive is the chequering, which used to be something you never found on laminate stocks, as they either came plain or stippled. There are three panels on the forend (both sides and underneath) with two on the pistol grip - and well executed it is too. It gives a secure hold yet is not too dictatorial. Overall this is a nice piece of work with the barrel channel open enough to free-float the tube and also rigid enough not to show a shift in point of impact on or off a bipod.

The action is totally familiar and made from satin-finished stainless steel. The bolt release catch sits to the rear left with the tapered dovetail bases peculiar to Sako on top. The two-position safety is rear right, though now there’s an added catch that allows you to open the action when on SAFE, which is a useful feature.

One thing I always find cute about the Sako is its slim bodied bolt, and the 85 is no exception. With three locking lugs the design supports the case head on three sides, which is a consequence of the fact it uses a fixed blade ejector set at 6 o’clock in the action. The handle is teardrop shaped and angled back slightly. The shroud is large and the top section is checked to reduce reflection, and at the back is a cocked action indicator lug.

The 85 like the 75 offers a proper detachable magazine, which loads to a capacity of five rounds in the 308 Winchester the rifle came in. The new locking system is called the ‘total control latch’. As before the release catch is at the front of the well, which pulls back to operate. However, to make this happen you first have to push up on the mag’s base plate. OK, it takes a second longer, but you still have a proper DM facility with no chance of accidental operation dumping it into the grass unnoticed.

Regardless of the model, Sako are one of the few companies that produce five action lengths to suit individual cartridge overall lengths (COLs) groups. Normally you get a choice of long or short with other makes, or just long with switch barrels. So you can go from XS (223 sizes), to S (308 sizes), to SM (Winchester Short Magnums), to M (30-06/6.5 Swedish sizes) up to L for magnum’s ( 7mm Rem mag etc). Their website has all the calibres. Capacity is generous too with 5+1 in S and M and 4 + 1 in XS, SM and L.

The trigger is adjustable from 2 - 4 lbs, but the pull it came out of the box with was fine by me as it offered a light, crisp and readable release. As I recall the old 75 used a separate recoil lug that was retained in a slot under the receiver by a screw, so I decided to see if Sako had changed that system and to my surprise they have. What they have replaced it with is nothing like I have ever seen before. A flat steel plate with a rectangular cut-out is screwed directly into the front of the action cut-out in the laminate. A corresponding lug on the underside of the receiver engages with this to give a recoil lug of sorts. I assume it must work, as Sako knows a thing or two about building rifles, but it was unexpected…

GMK sent me a Burris 4-16x44 AO scope and a set of Sako, Optilok rings and bases. This is mandatory as their dedicated tapered mounting system is the only thing you have to put the glass on. Meaning if you have one of these then you need two of those. But I suppose it’s no different if you were to buy a Blaser R93 or Mauser M 03, as they too only offer their own mounts…

However, the overall impression of the Sako 85 is that of a well made and well put together rifle. Function is 100% with the controlled cartridge feed and slick bolt action never missing a beat and gliding like silk. Likewise the well positioned safety that allows operation with no loss of the firing position and the good trigger too. The overall feel of the gun is one of competence. The magazine can be used as a proper DM or left in place and easily loaded through the top, which will suit all users. The barrel is of light/medium profile, hammer forged and also totally free-floated with no interference from the forend even off a bipod. So with a Harris bipod up front and a field bag under the butt it was time to see what the 85 could do…

Ammunition went to two weights and types, as I was unsure of what the 1-11” rifling twist would like. For a standard load I picked Winchester 150-grain Ballistic Silver Tip and for heavier duty Federal’s 180-grain Premium High Energy. As ever 308 Win can be a bit barky in any weight though I did find the 85 more controllable than some other rifles.

Neither cartridge shot what I would call amazingly, with the Winchesters producing 2” at 100 yards and the heavier Federals cutting that down to 1 ½”. My gut feeling is that the Silver Tips were a bit too fast for the twist rate/rifling form and the 180s maybe a bit too heavy. Something like a 165/168-grain might be the answer or a slower 150, but as with most rifles it’s about finding out what they like, be it factory fodder or reloads. Were this my gun I would use my old 308 load of 168-grain Hornady A-MAX over 44-grains of Vit N140, which I think could do well…

If we assume that the correct ammunition will allow the rifle to group into an inch at 100 yards, which I think is feasible then the Sako 85 stacks up pretty well. The price however is high in comparison to say a Remington 700, or even the Tikka T3, but then again so was the Model 75 for its day.