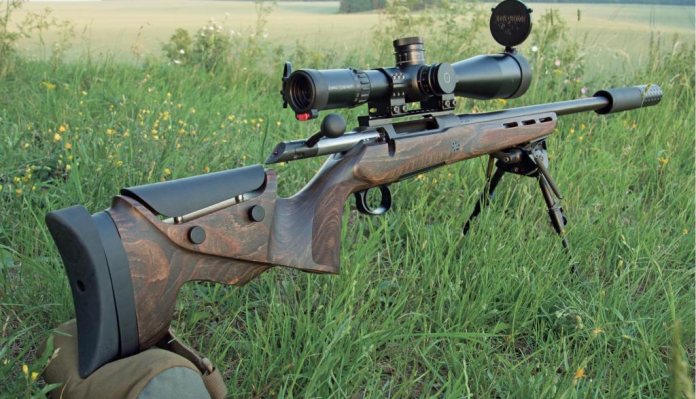 I have used and reviewed the Sauer 100 in many of its formats but the one that stands out for me is the Fieldshoot. With its heavy barrel and unique laminate stock, it stands distinctly aside from many of its Germanic brothers and will suit a number of shooting needs.

Calibre choice; what else? 6.5 Creedmoor fulfilling all my needs for longer range target use and extended varminting opportunities. Sensibly it has a 24”, hammer forged barrel that has a 22.2mm diameter and is tipped by an 18x1mm thread. Its dished crown is clinically neat, which should get the best out of this calibre.

The action shows a threelug, push-feed bolt with 60º lift and the signature, twin plunger ejectors that do the business. Any Rem 700 long action bases will fit, and I used a Britannia 0-MOA Picatinny rail for a Schmidt & Bender PMII with extensive ballistic capability ideally suited to the Creedmoor. A teardrop-shaped bolt handle extends 65mm from the action, well-scaled for fit to provide excellent operation on this inherently bulkier build. Operation is smooth from the full diameter shaft with clean feed from the magazine with no damage occurring to bullets as they are chambered.

The rear of the shroud shows a cocked action indicator, with the bolt release on the left. On the right, a 3-position safety catch: forward – FIRE, middle - SAFE with bolt operation and rear - SAFE bolt locked. It operates silently and on this heavier variant of the ‘100’ with larger stock, a little more nestled in and seemingly less prone to snagging on your sleeve when working the action. Feed is from a double-column, 5-round, detachable magazine, as with all 100 models. It fills easily from the top and the release catch is at the front of the well, with mags falling free on the changeover.

I found the magazine preferred a slight angle inward approach to the well with the rear fractionally before the front for a quiet, clean discernible click on the otherwise compact flush fitting unit. A sixth (+1) can also be pre-chambered if desired. This polymer magazine is superb, one of, if not the best in the business and a design shared by Sauer’s 101. When fitted, it also allows single rounds dropped into the ejection port to be smoothly chambered for any backup shots and is easily topped up via the ejection port too!

The trigger shows a comfortable, matt-finished, 9.5mm wide curved blade within a spacious aluminium guard. The break is crisp and adjustable from 1-2kg, mine broke reliably at 980-grams which felt well-matched to the 6kg mass of the rifle including scope, mounts, bipod, and moderator. Made from brown laminate, the Ergo Flex stock shows ventilation slots on the sides of its rigid, 420mm forend, with a flat, 50mm wide underside along with twin QD studs with a third under the butt. The barrel is fully floated, no undesirable flexibility from any shooting position and utterly capable of withstanding even deliberately aggressive handling from a tripod and prone with no change to the point of impact. I generally use Harris bipods, and here the flat underside does require a tighter fit as they can twist a little being designed for slightly curved undersides. However, not a huge problem to pack with a rubber shim to prevent it.

The Fieldshoot is ultimately also suited to bags and other improvised rests, the forend’s bulk and stiffness allow for future upgrades like ARCA or Picatinny rails to be fitted and you won’t ever disrupt the barrel’s harmonics. Finger grooves are shown atop and a reinforcing stud traverses the laminate below the front action bridge to reinforce this higher stresses region that is internally carved out for the action inlet with a bonded in aluminium bedding block for the front recoil lug. The cross bolt is a smart move by Sauer in this often weaker area of laminate rifle stocks which like any chain, rely on every single glued surface within the structure to maintain their bond otherwise a crack can form and propagate in an area with peeling stresses applied, that cross bolt prevents this.

The compression sturdiness of the forend is notable when used with supporting saddle-type rests that clamp the gun, so, no zero shifts. The pistol grip is comfortably raked a little, not too vertical and shows a distinct, right-handed palm swell on the subtly chequered surfaces. It’s deeply carved for the base of your palm and provided secure thumb up or wrapped position. Reach is around the 80mm mark allowing perfect trigger blade position on the first pad of my index finger for reliable control.

It’s not impossible to shoot this rifle left-handed but the grip and relieved areas are undoubtedly asymmetric so not ideal for longer strings of fire for a left-handed shooter. Following behind is a deep sculped recess for the non-firing hand in a support position to manipulate a larger soft rear bag or clenched fist under the short rear butt hook. I’d have preferred this slightly longer to facilitate use as a ‘rider’ with rabbit ear bags but appreciate the stock’s sculpted lines adhere more to the ‘Fieldshoot’ rather than ‘benchrest’ ethos. I can appreciate Sauer’s approach to a heavier Varmint or precision rifle style.

We are all different shapes and sizes so what is personal opinion for me at 5`11” tall is perhaps around the national average heightwise. I think Sauer has made a good ergonomic compromise on the Fieldshoot, a rifle of multiple characterful visual features adorning thoroughly well-proven ‘100’ mechanics I have personally worked hard when hunting. The recoil pad is slightly concave for good grip with a firm, dense rubber allowing excellent feel for shoulder pressure exerted when loading the bipod. It’s also adjustable vertically and angularly enabling it to mould closely to your shoulder width profile that also improves head position. On top, the height-adjustable comb is made of a black polymer that blends seamlessly with the laminate profile when fully lowered. It adjusts 25mm upward if needed and fits under the cheekbone without jaw displacement. It’s not laterally adjustable but locks firmly with twin screw adjusters on the right side. Bolt removal requires it lowering and I’d perhaps like to see some engraved markers on the twin stainless steel underside posts but the simple cure is to wrap some electrical tape around one post and simply lift it out for bolt removal, I do this on my own guns anyway.

Shooting was a delight, from the crisp trigger through to the smooth magazine feed. It is stable from all supported positions where weight is the great calming factor for precision use that cannot be unintentionally misused by the shooter so utterly consistent shot to shot. I used four ammo types between 120 and 147-grains and found it settled into sub- MOA grouping for 5-shots immediately with them all. But there was a noticeable improvement in performance after the first 40 or so shots.

I rarely get a totally unused test gun, so I hardly bear a grudge that this unfired rifle, just like one you would buy, would take a few rounds to bed in. It was nice to get a direct feel for the barrel quality straight from the box.

In the end, I stayed with Hornady’s 147-grain TAP FPD ammo generating 2578fps|2169ft-lbs at the muzzle. This was offering occasional sub half MOA groups at 100m with a 0.6 MOA extreme average and what I chose for taking to the fields with longer distance targets and shooting opportunities away from the mundane range and bench setup. I swapped scopes a few times, which is a subtle way of saying I really trusted it and found the weight, ballistic capability, and precision a great foundation for optic tests.

Wildcat supplied a moderator, which combined with a seemingly long, yet thoroughly ‘normal’ 24” barrel made the gun an all-day rifle, not just the mandatory group tests required for review. It was notable how the swooping recoil pad profile locked into the shoulder combined to barrel weight negated muzzle lift on firing, even without the moderator. Laminated materials have evolved hand in hand with mechanics and styling which in the case of the Sauer, embodies one of my favourite descriptive phrases, ‘angled curves’. It is one of the first laminates I have shot, that even on a low recoil rifle, still feels somewhat alive!

Overall, another classy variant to the Sauer 100 family, a great action, magazine and trigger plus the stocks & barrel options will just line up to ride that train to target from this fundamentally sound foundation. A very enjoyable gun to use and review.