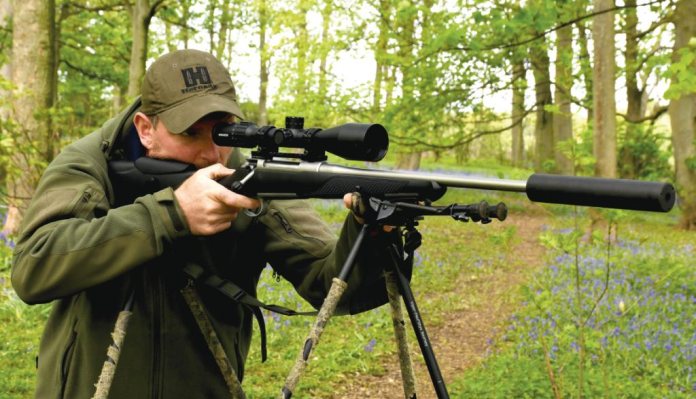 auer’s 100 already has a good standing in my mind, a truly capable hunting rifle with no unnecessary baubles or tinsel. Perhaps the most appealing for the UK hunter, up until now, was the Cerakoted version. However, like all coatings, no matter how tough, they can get chipped and scarred, so Sauer has gone for the inherent corrosion resistance of stainless steel itself.

The 100 Stainless XTA has a 22”, cold hammer-forged barrel, with a neat 15x1 invisibly capped thread for a moderator. The external, fine bead blast finish discourages both initial pitting initiators and visual reflections, from what is still a brighter colour than matte black or blued steel. The barrel’s diameter is 17.3mm, tapering outward before swelling up to the 28mm reinforce surrounding the chamber, entering the receiver at 35mm. Sauer uses a breech ring abutment arrangement, clamped between the barrel and receiver for the bolt’s three lugs to bear upon. A single raceway is machined into the left side of the bolt’s 20.3mm diameter shaft, giving smooth, unobstructed travel. It’s virtually impossible to jam or stutter the bolt during its 114mm journey cycling the action. Cocking is on opening.

Operation is through a 60° lift to the 60mm handle, which is tipped with a 20mm matte black polymer ball with additional grippy grooves. The shroud, with protruding firing pin, has had a slight redesign to make it flow more smoothly into the rear action bridge and tang without niches for debris to accumulate. The black cocked action indicator remains tactile. Primary extraction leverage of fired rounds is performed by the receiver’s taper at the bolt handle’s base and the rightside extractor claw showed no problem drawing out even over pressured brass.

Twin sprung plunger ejectors are seated on the push feed bolt face, itself stripping rounds from the underslung twin column, polymer magazine, which is common across the Mauser and Sauer ranges for a good reason - it’s superb. A recessed button in front of the mag well releases it and the internal spring at the rear of the well drops it into your palm. These mags seem to prefer the rear to slightly lead the front when clipped into place

Sauer’s 3-position safety catch operates quietly with Forward for FIRE, Middle for SAFE (with bolt operation) and Rear for SAFE (with the bolt locked).

The single-stage trigger can be adjusted from 1000 to 2000-grams and mine broke consistently at 1150-grams, with no tactile perception of creep. It has a smooth, black, 9mm curved blade, which is perfect on a hunting rifle that’s likely to be used in inclement weather with gloves, plus there’s loads of space in front of the trigger blade.

For scope mounting, there are four threaded anchor points on both bridges and any long action Remington 700 compatible bases will fit.

The devil is in the detail

Sauer’s polymer stock might look modest but shows immediate potential as it free-floats the barrel all the way back to the action. The forend demonstrates sufficient stiffness to avoid intermittent barrel contact and there’s plentiful bulk, giving a handful of grip without letting the fingers touch the barrel. There are inlaid chequering scales in the solvent resistant and durable ‘soft touch’moulding. Well anchored sling/bipod studs are positioned front and rear and the lighter grey, cast aluminium bottom metal colour matches the barrelled action and blends seamlessly into the stock’s shape.

The reach to trigger from the back of the grip is 80-85mm. The open radius profile offers an excellent feel for most hand sizes, with minimal ambidextrous palm swell and space for three fingers.

The butt slopes slightly upward to the solid 16mm recoil pad and without spacers, it provides a generous 14.3” length of pull (LOP). Sauer’s hallmark comb layout, rising from nose to heel, inherently removes shock from the cheek and head when the gun recoils, contributing to comfort, whilst still providing tighter comb fit and no concussive recoil to skull impulse.

The slender adjustable comb can rise 35mm above the stock and twin pillars don’t let it wobble. It locks securely with a single 25mm triangular knob, rather than a round dial. Its soft-touch coating never feels cold on your skin and all the edges are chamfered to avoid cuts or snags.

Removing the Allen screws fore and aft of the mag well shows a 10mm nut under the front bridge. Once removed, the action lifts out, showing its front stud to be the main anchoring point, slotted and tensioned through a machined aluminium bedding block bonded into the polymer moulding. Intricate internal webbing remains rigid and no particular bedding stress was evident during a correctly tensioned re-assembly.

No specific ammunition was suggested but I ran some 170-grain .308 GECO ammo to get an initial zero and run this brand-new gun in, before eventual ammo selection and chronographing. There weren’t any problems attaining the magic MOA accuracy standard straight from the box, but as always, ammo variability and bullet weight preference dictated average performance on a hunting rifle which I prefer to assess with 3-round groups, even if the magazine has a 5+1 capacity.

I cleaned the rifle and the borescope showed nothing of doubt in the bore, which proved easily cleaned of carbon and a small amount of ingrained copper.

Next up was the Hornady 150 and 165-grain SST, which weren’t initially quite within the MOA region, but the 178-grain Hornady Precision Hunter ammo with ELD-X bullet was an immediate go-to choice. This preference for the longer, heavier bullets helps with consideration and adoption of longer, lower density copper bullets. Here, the 165-grain GMX Superformance were also within the magic MOA for 3-shots. Sauer’s specification of a 1:11” twist rate is a great future-proofing compromise for a sporting .308, versus seemingly ‘older’ 1:12”.

Recoil was linear with a moderator fitted. The firm recoil pad showed no sponginess and the grippy serrations meant it remained planted in my shoulder, allowing tactile perception of applied shoulder pressure. Harmonic reverberation through recoil is avoided and the light cheekpiece, with space underneath, further isolates concussive vibration transmitted to the skull. The shape slots exceptionally well under the cheekbone without lateral jaw displacement.

Plentiful chequering and the inherently grippy texture didn’t require excessive force on the grip, and even though we all have different sized hands, I found the medium/large grip dimensions ideal for a secure feeling, without over-reaching a short, spaced trigger blade. Weight adjustment for the latter is possible with an Allen key and it looks like the sear engagement was threadlocked, suggesting it should be left alone. A fellow shooter with a smaller stature and particularly small hands agreed the grip’s open radius was equally comfortable from their perspective. It’s also worth noting that there was no noticeable point of impact shift while shooting from the bipod or sticks.

Light bolt operation continued in a rifle action I find inherently smooth for fast backup reloads and never snagged a new round or failed to eject a spent casing. I found I had some very hot, overpressure factory ammo in my range bag, which caused heavy bolt lift. I later found this was down to the ammo’s poor headspace tolerances, yet the Sauer coped where some rifles wouldn’t have and no other ammo caused similar issues. The Sauer’s precise headspacing is a benefit and showed up the weaker quality/ specification control of this ammo, which I stopped using for the review.

I actually handloaded for this rifle with a favoured Lapua/Vihtavuori/ Sierra hunting recipe and with little tailoring effort at all, just consistency, found an almost ½ MOA gun for 5-shots nearly every time. Excellent.

I rather like using sporters as an allday carry when teaching, regardless of the distance to the target (as long as I have the right optic) and find them fun to use on realistic hunting instruction days with longer range shots combined too. I didn’t ‘just’review the 100 XTA, I enjoyed using it. I found it an assured companion with no real faults and no ‘ego’ in its pricing either. It’s a solid contender because Sauer has streamlined what the UK stalker needs exceptionally well, just a shame there is no left-hander.