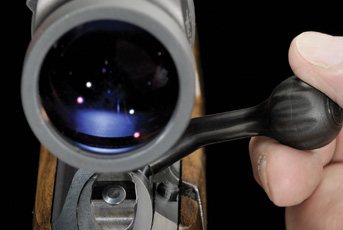 Sauer has a serious reputation as a rifle maker and their bolt-action 202 must be one of the most popular guns in Europe with a strong following in the UK too. To be honest I am not a fan, nothing to do with its ability or quality, it’s just the case sometimes that you don’t get on with something and I’m uncertain what it is. Shoots well, works well, but not for me! So I was intrigued this year at IWA when they showed off their latest design, the 101, which is very similar mechanically to Mauser’s M12.

Given both companies along with Blaser are part of the SIG group, this parallel development is hardly surprising, however they both offer specific design features that should encourage brand loyalty. Even Jamie Garland (Sauer distributor) admitted to me that the two guns are near identical! I can vouch for this as I tested the M12 last issue and now have the pleasure of the 101 for this one. It’s not often you get to follow up on a story like this so quickly, and also posses the leading question of: is there a clear winner?

In truth the 101 is very 202-like though the former shows good and bad areas. It also scores in some aspects over the M12, whereas in others I feel it lacks. However, putting my head on the block I already prefer the 101 to its older sibling and whereas I would never buy a 202, its younger brother is a consideration and not just for price alone!

This got me thinking as to why I don‘t favour the 202 and I have identified three aspects of the design, since using the 101.

1 - The single column magazine needs to be removed to be filled and though an adequate capacity; in truth I prefer a four or five shot staggered column unit.
2 . The ejection port is adequate for the job of getting cases out but there‘s little access to get in to clear a stoppage or single load.
3 . The twin button, push up/down safety with SAFE located on the tang and FIRE inside the trigger guard, though clever, is a bit involved.

The rifle shows an all-steel, fixed barrelled action and some unconventional thinking. Most notable is the barrel fitting as the receiver is heated up and the chase forced into it then pinned in position in what Sauer calls: ‘a tension-free HEAT LOCK process.’ Secondly the EVER REST bedding, which consists of a large square alloy recoil block that pins to the barrel and sits in a pocket in the action void. It is then bolted into position to give what we are told is maximum stock isolation.

Traditionally twin action screws pass up through the bottom metal and into the underside of the receiver. Not totally in this case as the rear one goes into the tang with the front screwing into the forward nut just holding the bottom metal. Better or different - we shall see!

The action is very 202 but again with some surprises. The large and solid bolt uses 6-lugs with a swept back handle with a 60° lift angle, the face shows twin, plunger-type ejectors. The ball end is fluted plastic! Feed is from a 5-shot (four in Magnum) polymer magazine with the release button at the front. Taking a leaf from the Browning X-Bolt there’s a combined bolt removal/unlocking button (SAFE OPENER) on the rear right of the action that if the gun is cocked and on SAFE you can still open the action.

The DURA SAFE safety confused me as when I first saw it I thought it was a de-cocker, as it’s placed at the rear of the bolt, it put me in mind of the Sauer 90s tang-mounted design only higher. However it’s a normal ON/OFF system, which locks in SAFE mode by an integral button, which has to be depressed first then slid up to FIRE. To return it pulls down with no button operation required. The 202-like receiver shows a slightly larger ejection port.

The soft touch stock is very much to my liking with a decent 14.5” length of pull, cast-in gripping panels back and front along with an ambidextrous butt shape and pistol grip, and a good rubber recoil pad. Two QD sling studs are fitted in the normal places with a third in the tip of the semi-Schnable forend. Comb height is near perfect too. The 101 Classic comes in wood in an identical build, take it or leave it! I have not seen one in the flesh but the quality of timber looks about the same as the Mauser from photographs; for that read average at best. I was told by Garlands that there is no Grade II upgrade option as there is with the M12, well at least Sauer don’t rub it in your face!

Interestingly this is also reflected in the price with the wood being £1595 and the XT a staggering £1395. Making them £100 and £200 cheaper than the comparable M12s though the Mauser comes with bases, whereas the 101 does not, but a set of Warnes or similar will only set you back about £40 so there is a saving. The rifle came from UK importers Garlands with a set of real Talley mounts and a Swarovski Z6i Mk II 2.5-15x42 HD scope, so no complaints on optics!

The barrel is button rifled and we are told by Sauer that it’s a match grade tube. It shows what I would term a light/medium profile and comes threaded 14x1mm (no spigot) from Garlands. They told me that they will not be offering ½ x 20 UNF, which I think is a mistake, but things could change. Iron sights are an optional extra but as standard the guns come barebacked.

For me the 101 shows both positive and negative features. The ejection port is just large enough to top load the magazine, but you can’t single load by just dropping a round onto the platform as when rammed it nose-dives into the breech face. The safety is a tad too high for easy thumb operation as you break your firing hand hold; also you have to remember to press the button too. It’s not a big deal, just not that well thought out. A standard, tangmounted design would have been better; sometimes I think certain features are put on for the novelty! Hey let’s fit a normal safety; to hell with that let’s make something different then justify it! The bolt runs smooth and slick and the action cocks easily, plus those twin ejectors really kick the brass out. The magazine free falls from the well nicely and the stock shows a most practical layout and dimensions. The trigger is crisp and light breaking at a quoted 2 lbs; I would not disagree. However, I would say be aware of this and get used to it as it’s easily pulled… Sauer have been smart as the receiver is shaped and drilled to accept Remy 700 mounts, so no problems getting bases! Ammo-wise I picked two weights; in 150-grain were PPU soft point and Winchester Power Max HPs and the heavier GECO 165-grain Express ballistic tips. Accuracy was good though not amazing and like the M12 the 101 showed a distinct preference.

The 150s were a bit disappointing shooting 1.5 - 2”. I cleaned the barrel as it was filthy and tried again with similar results. Switching to the GECOs confirmed my thoughts as groups shrank to an inch with a few going sub that. The M12 shot best with GECO 170-grain PLUS. However and in fairness I just picked three brands and two weights and like any rifle it’s down to you to see what it really likes as they all differ. Feed and function were 100%. At the end of the day I like what the Sauer 101 has to offer and would not be unhappy with one at all. The XT would be my choice due to its good stock and mad price. I think synthetics are best as you are not worrying about buggering up good wood, probably not a problem in this case!

VERDICT
You won’t go far wrong with a 101; get the XT and you can afford a quality base and ring set too!