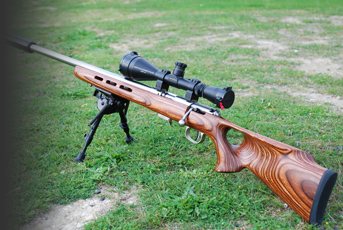 We right hand shooters do have it all our own way in the big scheme of things! Not for us the limited choice of guns and calibres offered by most manufactures for the less prolific southpaw community. So when Jamie Garland (Garlands Ltd) sent me a left hand Savage 17HMR I thought he had made a mistake. But he had not as he wanted to show guns of this nature are available, so now it was down to me to see what sort of accuracy I could wring out of possibly the worst stock configuration for a right hooker – a left hand thumbhole (TH).

Without doubt the thumbhole laminate /stainless build of the BTVS does to a degree lift the cosmetics of what is undeniably a basic looking rifle. However, looks are not everything as the Savage comes with 1” bases as standard along with a threaded (1/2x20” UNF) muzzle with protector. Add to this their Accutrigger, which offers a superb, adjustable pull that is impossible to make unsafe by excessive twiddling and you do have quite some package.

This is a proper left hand gun with all controls reversed as is the TH stock layout. Made of a dark brown laminate the forend free floats the barrel and shows three slots either side. Underneath are two, QD sling studs, which is nice as you can mount a bipod nearer the action if you wish. A third finishes off the butt!

The butt shows the high/straight comb and roll-over cheek piece common to this build, with a bolt channel cut in the top. The pistol grip is generous in proportion as is the cut-out for the firing hand, all combining to give a decent hold and head position.

The bolt and tubular receiver are basic in build with a 2-position, rolling lever safety at the rear/left of the action. This pushes forward to FIRE (red dot exposed) and reverses for SAFE. Due to the nature of the stock this cannot be operated by the firing hand thumb, instead you need to use your trigger finger. The magazine though solid and well made is a simple, 5-round type. The release catch is a piece of pressed steel at the rear of the well, which is pulled to the rear; it works fine but is far from subtle…

The barrel is parallel with an O/D of 0.810” and 20 ¾” long. The rifle tips the scale at 7 ½ lbs (un-scoped) and measures 40” overall. For the test I fitted a Leupold 3-9x50 VX-II in Warne mounts, Harris BRS bipod and up front went a SAK moderator. Ammo went to Remington 17-grain V-MAX and Hornady 20-grain hollow point.

The BTVS’s varmint looks and build very much suits the role of the 17HMR in the UK, as 99% of the shooting I do with my 17 is either from a truck or off its bonnet. General engagement ranges for me are between 80 and 160-yards with an average of just over 100. It’s at these distances the 17HMR really excels

These days many factory rifles come with what might be termed as improved triggers and I believe all this is down to Savage, as they were the first to offer something better than a garden variety mechanism. Called the Accutrigger the design is easily adjustable from 2 ½ – 6lbs by a single screw and cannot be made unsafe either. My example tripped off at around minimum and offered a crisp and light release. To look at the design shows a blade within a blade, with the finger taking up a normal position the inner blade is depressed which unlocks the mech for the pull. If by accident the outer is pulled alone the gun goes into a fail safe position and won’t fire, this is remedied by operating the bolt.

It soon became clear a right hand thumbhole hold was not going to get the job done as it seriously foreshortens the trigger finger position. In the end I settled on wrapping my thumb up and over the bolt channel, which gave a decent enough grip. Despite being a**e-about-face, I really appreciated the left-sided bolt as it allows you to maintain the firing position off a bipod or rest and easily cycle the action with your left paw.

To be honest accuracy was not as I had expierenced with a 17HMR, BTVS I tested a couple of years ago, which as I recall was doing ¾” at worst. Of the two rounds this example did not like the 20-grain HP, as it strung them up the target in a three inch line, which is normally a sign of a heavy trigger, which was not the case here. It shot the 17s at an inch with the occasional and annoying habit of throwing one out of a 3-shot group. However, from past experience with this model I’d put this down to the individual rifle and not the make in general.

At 5-rounds the capacity is acceptable, though as a matter of course I would get at least one spare clip, if not three. What I did not like was the position and operation of magazine release catch as it feels a bit awkward. Overall the Savage BTVS is a 17HMR worth consideration, with items like the Accutrigger, threading, scope bases and TH stock being plus points. Also the option of a true left hand model will have a definite appeal to that shooting demographic.

The BTVS is now available in a carbine format in what looks to be a 15 or 16” tube and as always threaded ½ x 20” UNF. How this affects practical performance remains to be seen, hopefully I will be finding out.