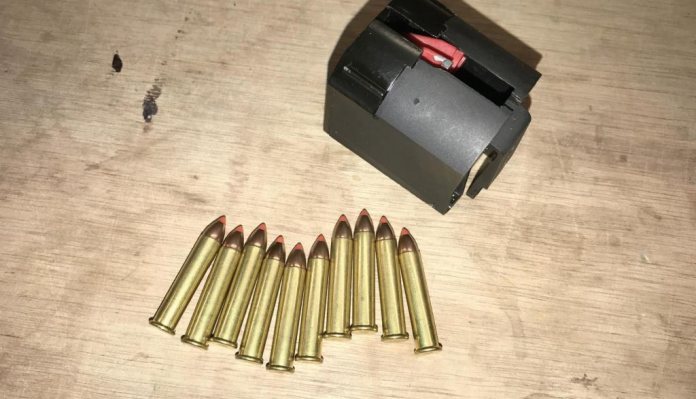 A new .22 semi-auto sporting rifle is perhaps not such hot news these days here in the UK! But Savage’s latest offering, the A22, does bring something to the party. Now just appearing in the UK, the A22LR (22 long rifle) and the A22 Magnum (22 Winchester Magnum Rimfire) look set to offer a reliable and accurate rimfire self-loader. The A stands for automatic and this rifle is the companion to their also new B (bolt-action) series of rimfires!

For testing, I chose the 22WMR, the reason being it’s an interesting alternative to the 17HMR, a calibre that seems to hog most of the rimfire limelight! But in the UK, the 17 has taken a bit of a down turn, due in the main to problems with ammunition quality, and as an HMR fan, I have to sadly agree. So, we are now seeing a lot of re-interest in the old WMR, a calibre I have always considered less accurate than the HMR, though certainly more powerful.

The A22 is a basic, though not unattractive looking, rifle with a polymer stock with textured sections on the grip and forend and Q/D sling studs fore and aft. The former is quite near the tip but fitting a Harris bipod was not a problem. Length of pull is good at 14” and the build is all-steel, with a button-rifled, 22” barrel and case-hardened receiver. The A22LR shows a 16” tube and both are threaded ½ x20 UNF from the factory. Given the calibre, this all-steel construction makes sense, as the WMR is nearly 100% more powerful than the 22LR.

Lot to get hold of

The large bolt is hard chrome-plated and shows a big, flat rectangular cocking handle, normally 22 semis have a tiny little hook, but here there’s a lot to get hold of! Features include Savage’s renowned AccuTrigger, which is useradjustable and cannot be set too low; it adjusts by an Allen key through the trigger guard bow at the rear. There’s a traditional cross-bolt safety in the front of the trigger guard- it pushes right to left to FIRE and reverses for SAFE, in this condition it does not lock the action either.

Feed is from a 10-round rotary drum magazine like the Ruger 10/22 unit. The design precludes an automatic last round hold open facility; so, Savage integrated a push-up, manually-operated lever between the rear of the mag well and the front of the trigger guard. It’s set by pulling the bolt open and holding it then pressing up on the catch and letting the bolt slowly forward until it holds. A quick pull back and release trips the catch to close the action. The flush-fit magazine has an integral release catch at the front of its body and there’s a cut-out at the front of the well to allow your finger to operate it.

Another good feature is the fact that the A22 comes with a set of 1” Weaver bases as standard, so no problems scoping up, which is essential, as no iron sights are fitted. On that point, importers Edgar Brothers sent me a Bushnell Elite 6500 2.5-15x56 scope with capped BDC-type turrets and side parallax. It proved a good pairing, as the rifle showed excellent accuracy with Hornady’s 30-grain V-MAX ammo, and its more curved trajectory was accounted for by dialling in the range. I fitted this up using Tier One rings.

Slightly different, is the receiver design, as it’s in two parts; the main section is steel but the rear end shows a removable plastic cover. This locates the main spring and has to be removed for stripping. Also unusual, is the fact that the two action screws are opposed, with the front one coming up from below and the rear coming down from above, which necessitates removing the cover first. Yes, it’s possible to strip it down and clean from the rear, but this means removing the scope first.

Something like a bore snake would be the preferred method for me, which a serious scrub out only occurring as required!

My tester did not come threaded, but as I said; rifles will come into the UK cut ½ x 20 UNF and ready for a moddy. In the past, I have tested a few 22WMR rifles and they never seemed to be as accurate or consistent as the 17HMR. Whereas a good HMR can go out to 200 yards, I have always considered the 22 Magnum to be not much more than a 100-yard rimfire. Comparing the two calibres shows that the larger .22 bullet has a lower ballistic coefficient than the 17. For example, Winchester’s 40-grain PSP’s BC is 0.110, whereas the Hornady’s 17-grain V-MAX HMR shows 0.125 and their 30-grain WMR also a V-MAX is 0.095.

The A22 initially showed poor accuracy and reliability, but settled down after about 50-rounds, followed by a good clean out. Its least favourites were the Remington 33-grain loads and it did not feed the Accu-Tips well at all. The magazine is a bit fussy on insertion and you need to give it a good slap, so that it locks in securely to avoid miss-feeds. This too ran in and even on a closed bolt load it engaged properly. The butt is hollow and resonates annoyingly, easily fixed with a squirt of cavity filler foam. Saying that, Boyd’s Gunstocks offers a number of laminate options, including a thumbhole, Edgars will be bringing these in soon.

Technique is all with this rifle, as being a semi-auto, the trigger resets as you follow through and as you let off the blade it jumps forward and sort of kicks back. I found it better to keep it pulled and maintain your sight picture until the shot was gone. Even when moderated, a semi-auto is noisier than a bolt-action, due to clacking of the bolt as it cycles and its open bolt, blow-back mechanism.

I thought the average inch for the 40-grains loads was pretty good, but the .75” of the Hornady 30-grain V-MAX was most impressive. Other writer’s reports on the A22 Magnum all talk about its accuracy potential and I concur, but like all semis, try a few brands of ammo to find what it likes. There’s not much in it but I’d go with the CCI Maxi Mags for a 40 and obviously the Hornady 30s. I will be getting the rifle threaded and it might be the addition of a moddy, as it can often do, improves performance a bit more.

Overall, this is a surprisingly good rifle and to a greater degree has restored my faith in 22WMR. Would I get one, well it seems possible but with the Boyd’s T/H stock?