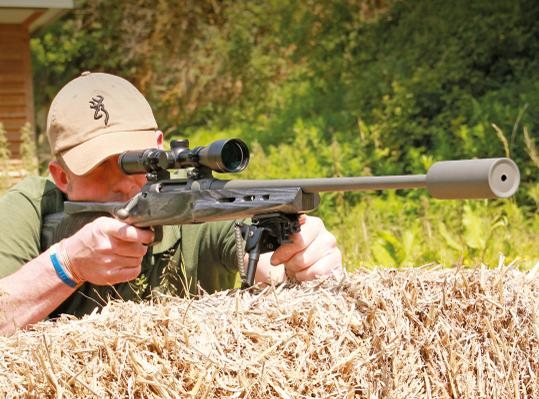 When Savage launched their budget-priced Axis I was initially underwhelmed – no AccuStock or AccuTrigger, however I have to admit even with its horrid plastic stock and slim tube it shot well. As I recall back then it was bundled with a Weaver Kaspar 3-12x50 scope coming in at £700. However, their Axis II is much more of a package deal as the rifle is a moveable feast and also addresses something that was missing from the original – a better trigger. The Mk II is available in the following calibres: 223 and 22-250 Rem, 243/308/270 Win, 7mm-08 and 30-06; more than enough for the UK! You also get the option from the distributor of a number of upgrades as well shall

The rifle on test shows all the whistles and bells available should you want it. The basic gun comes with their standard, black synthetic stock, in a blacked finish barrel and action threaded ½ x 20 UNF. However, they now fit the AccuTrigger as standard, which is probably the best, adjustable unit ever. It can be easily set up by the user and more importantly cannot be set too low, from the box it broke at a pleasing and crisp 3-4 lbs so most shootable! Savage sends it out bundled with a 3-9x40 Weaver scope, rings and bases are included; so not too shabby!

Feed is from a detachable, 4-round box mag and the receiver is tubular in build with a large ejection port and offers a long action only. Sensible really as they do not have to make two sizes and the difference between say a 243 and 30-06 is taken up by the magazine and the mag well lengths. The bolt is familiar with twin locking lugs and a plunger-type ejector, with a cranked handle and egg-shaped ball end. At the rear is a cocked action indicator pin with a tangmounted safety behind – another favourite of mine! From here on in it gets interesting!

The first optional upgrade is the Boyd’s thumbhole (T/H), laminate FT (featherweight thumbhole) stock in Pepper (black/grey). Other colours include Nutmeg (mid-brown) and Forest Camo (3-colour). I love T/H furniture and this does not disappoint, it’s a little slimmer in the forend than their comparable VT (varmint thumbhole) unit, which suits a lightweight hunter such as this. However it’s rigid and floats the barrel fully, so no issues on shooting ON/OFF a bipod. There are vents on the side; probably more fashion than function but they give a pleasingly racy look. The cross section is scalloped in at the top and provides a secure hold for off-hand shooting.

Length of pull is a tad short but a coat will take some of it up anyway. QD sling studs are fitted as standard fore and aft with two up front. The pistol grip is long and angled and in combination with the large, rear cut-out positions the hand for a comfortable, first pad on the trigger position. A slim rubber recoil pad finishes off the layout. The tang-mounted safety offers two positions – forward FIRE and reverses for SAFE and allows bolt operation, no dramas but due to the butt design you have to break your firing hand grip to operate it!

The Weaver 3-9x40 scope is not terribly exciting but a sound build in the most prolific hunting specification! It’s also one less thing to have to think about! The light weight, 22” barrel is threaded ½ x 20 UNF. So now you can also opt for Edgars own Macc Tecc Accurate Hunter (muzzle-mounted) moderator. We recently tested one of these and the newer, reflex, Macc Tecc Accurate Foxer, which is also another option. You can also get the barrelled action and moddy Cerakoted in this case in a light grey finish. The overall look and feel is most pleasing and the TH stock really gives far superior feel and handling; certainly when compared to the original Axis’ fantastic plastic.

This rifle was chambered in 243 Winchester; not a personal favourite, but probably the UK’s most popular hunting calibre. The mag release is easily operated by its integral catch at the front of the body, it’s a staggered row box that feeds from a central position and rounds don’t need to be inserted base-first but snap in through the feed lips. You can top load too as the there’s just enough room to get your finger in!

I tested with two loads and its favourite was Hornady’s 75-grain Superformance SST, which was shooting around 0.75”. Clocking at 3300 fps it gives 1827 ft/lbs and would make a good fox and deer bullet. I prefer going heavier with this calibre and tried some Fiocchi 95-grain using Hornady’s SST pill. This was doing 2832 fps/1703 ft/lbs, just scraping in deer-legal but I am not surprised as 243 Win is a very velocity-sensitive cartridge; certainly in barrels of 22” and shorter! This was shooting just over the inch so well up for government work!

Initial testing showed some double feed issues on the 3rd round, but after about 40-shots that went away. The cock-on-opening action shows heavy bolt lift, something I presume will smooth up with use and time. Perhaps not the prettiest gun in the world, the Axis II is a sound design with good accuracy potential. The T/H stock offers a practical and attractive alternative to the base plastic furniture and the gun is good to go from the box with the scope already included and represents a well priced deer or varmint gun!

I’d go for a 308 with the T/H stock and the Macc Tecc Accurate Foxer!