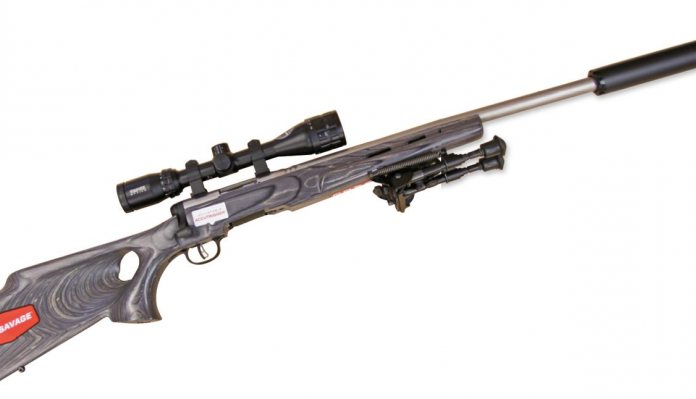 The world of rimfires has slimmed down to essentially three calibres - 22 Long Rifle (LR), 22 Winchester Magnum (WMR) and the more modern 17Hornady Magnum Rimfire (HMR). Before you start; the 17MACH2 is just about dead! The HMR has made a huge impact in the short time it’s been around! So do we really need another 17 rimfire? Apparently so, as in 2013 Winchester introduced the most powerful rimfire to date – the 17 Winchester Super Magnum (WSM). Though their baby, they did not make a rifle leaving that job to others. However, this year they launched their single-shot 1895 in the new calibre. Savage stepped up first with their B-Mag bolt-action, Ruger will doubtless follow and Thompson Center is offering Contender barrels. Plus there are some semi-autos, which are sadly not UK-legal!

I admit to being initially sceptical of the WSM; but that’s in my job description! But at a quoted 3000 fps/404 ft/lbs with a Hornady, 20-grain V-MAX it’s giving a lot more than the 17-grain HMR to the tune of an extra 500 fps and 154 ft/lbs. Which translates into greater down range potential!

The B-Mag according to Savage has been built around the calibre and offers six models; from slim barrels and plastic stocks, up to laminate and heavier tubes.

Importers Edgars Brothers sent me the Target version with a decent, thumbhole stock in stainless with scope bases included and threaded ½ x 20 UNF. The rifle has the weirdest bolt handle, as instead of a ball end it’s a hollow tapered tube! Locking is by twin, rearmounted lugs that engage in the back of the receiver and the action cocks on closing, which is unusual; doubtless a design requirement. Only the bolt handle and locking lug sleeve rotates and the main body does not! Unusually for a rimfire, the case head is supported, due no doubt to higher pressure, and the ejector is a plungertype. Feed is from an 8-round, rotary box magazine similar to Ruger’s 10/22 design. There’s a tang-mounted safety catch, which pushes forward to FIRE and reverses for SAFE with bolt movement.

The tube is free-floated in a ventilated forend with twin QD sling studs up front; though there’s no AccuStock! The 22” medium/heavy barrel shows a 1-8” twist rate, Savage reckon this will suit both the two bullet weights better. An AccuTrigger is fitted, which is user-adjustable for weight and cannot be set too low. This new design does not seem to have the finesse of the earlier version though it gives a decent and light break.

The 17WSM is based on a .27” nail gun cartridge. Winchester required a case that could withstand higher internal pressures than the 17HMR. The SAAMI listed pressure for the 17WSM, is 33,000 psi, by comparison, the 17HMR is 26,000psi. Logical really, as the .27” is rimmed and all they did was draw a longer version, beef up the head and neck it down to .17”. Currently there are two weight options 20 and 25-grains using a V-MAX/ ballistic tip though a hollow point is likely as is a non-lead. Quoted figures for these two are 3000 fps/404 ft/lbs and 2600 fps/379 ft/lbs accordingly, my ammo came from Hornady.

Going back to my original question about do we need the 17WSM, as we have the even more powerful, centrefire 17 Hornet, which was introduced about three years ago? It can push a 20-grain V-MAX pill at 3650 fps/598 ft/lbs, yet research showed it never really took off. I quite liked the calibre but found it rather specialised, but reckon the WSM has more to offer, bridging the 17HMR small centrefire gap better. So extending rimfire range and performance that many varminters will appreciate, plus a box of 50 WSMs costs less than say 20-rounds of 223 Rem. Scope-wise, Edgars supplied Bushnell’s dedicated Rimfire 4-12x40 with adjustable objective and BMAG 350 bullet drop compensating (BDC) reticule. This zeros at 100 and goes out to 350-yards in 50 yard increments.

With glass, rifle and ammo supplied and my trusty Harris BRS bipod up front I just needed a moderator! Which was kindly supplied in the form of UK Custom Shop’s new reflex Panther 17 (thanks Ali), which I reviewed last month. Light and compact, its new innards really do dial down the WSM’s signature to a dull blat, with little top end- nice!

Edgars initially sent me 100-rounds of ammo, which I thought would be enough, but with any new calibre you do need to get a feel for it and I burned through most of it on velocity, functionality, accuracy and scope testing. By that time I had yet to shoot anything with it, which is the whole point! US videos on performance indicated that most shots were between 100 and 200-yards with less pushing out to 250/300 yards.

As an experienced HMR shooter, I’d say that 200-yards is its effective maximum range and my Ruger M77/17 All-Weather with good ammo and correct wind compensation can make consistent head shots. So, the extra power and better ballistics of the WSM was starting to look attractive. Let’s face it, even if it only gives an extra 50-yards, that’s pretty good and at 250/300-yards small game are challenging targets regardless of calibre!

Over the chrono and first impressions

In my experience, it’s rare that factoryquoted ballistics, usually acquired from longer/heavier test barrels match up to real world results and the WSM was no exception. Over the chrono, I got an average of 2939 fps/390ft/lbs with an extreme spread of 34 fps, which I found most acceptable. Taking the extreme at 350-yards, it’s generating 1445fps/93 ft/ lbs, an HMR at 200 is giving 1347fps/68 ft/lbs. As can be seen, for a 17 rimfire the WSM has some serious clout, though whether it’s consistently accurate at 350 remains to be seen, my gut feeling is that 300 is more realistic, but hey that’s still a challenge even for a 223 Rem or similar!

Getting down and shooting the B-Mag revealed some quirks and different build features. The cock-on-closing bolt means you have to apply maximum bolt lever pressure on closing, which I did not like. The reason doubtless is the fact that the thicker case head built to withstand the higher internal pressures must offer reliable ignition every time, which means heavy springs. Thankfully this does not translate into a heavy trigger, which breaks at a crisp and readable 3 lbs!

A human-induced quirk is the fact you can all too easily rotate the bolt handle downwards on the forward stroke before the locking lugs engage! Bolts with fixed handles makes you automatically apply downwards pressure as you close, which is quite natural. I did this a good few times, as did others who tried it and I had to reeducate myself not to apply downwards pressure on the handle. The rifle cannot fire out of battery, so it’s just a matter of re-learning!

The safety too is different; as after firing, if you set to SAFE before reloading, the action will not cock, which is exacerbated by the fact that when on SAFE the bolt can still be operated. However, if you have the safety on when you load the first round you will be un-cocked; just be aware.

The bolt knob does feel a bit weird in the palm but it’s not that distracting. The action ran very well with no issues on feed, extraction or ejection and no split cases, which plague the HMR! The magazine needs to be angled in to insert properly and a good slap on its base to ensure it’s fully seated!

One thing I did hate was the cheap, plastic trigger guard, which looked like an afterthought!

I’m going to wind it up for this month, as more ammo is on the way so I can really wring the B-Mag and 17WSM out in the field next issue. I apologise but with a new rifle and calibre there’s a lot to talk about, hence this being a two-part review! I’ll finish with my initial range test. The rifle was shooting an easy ½” at 100m, so pretty much on par with a 17HMR and good ammo at this distance, so it has the accuracy potential. This was with the Bushnell BDC scope, which has a rather thick reticle, so I reckon a finer cross hair could shrink that to sub-1/2”; even better as the range is pushed out. The rifle’s few oddities aside, which you just get used to or put up with, I do like the B-Mag and even more so the 17WSM. And I think it could be as big, if not bigger, than the 17HMR!