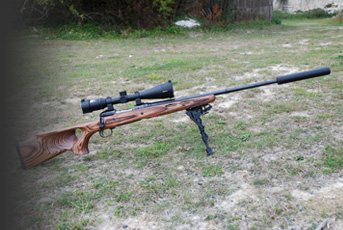 As the Savage Firearms importer Garlands tend to send me some interesting products from time to time, in their last package was a rifle I had not seen before. Nothing unusual about the barrelled action as it was a Model 11, but this neat little short action design was from their Hunter Series and showed a laminate thumbhole stock.

Chambered in this case in the old but still good 22-250 Rem the M11 BTH to my eyes represents the near perfect synergy of the hunter/varmint build. OK the standard weight, 22” barrel does get hot after a few quick shots, but how many times are you going to fire that many in the field? Likewise the thumbhole layout for me offers a more precision-style hold without being too dictatorial, which can only aid performance. Putting them together results in a rifle that as I discovered can seriously shoot, yet at 6 ¾ lbs (un-scoped) offers a most practical field option.

Savage do not seem able to build a good looking centrefire rifle as they all look like they have been put together by a committee who disagree on everything. However, beauty is only skin deep and very much like their 17HMR 93R17 BTVS, they do make a decent thumbhole stock that goes some way to improving cosmetics as well as shootability.

The bolt is large with two, locking lugs, a fully supported head and plunger-type ejector. The handle is straight and sticks out at an angle and unusually has one panel of course chequering on the upside of the knob. At the rear of the shroud is a cocked action indicator pin with the mechanism cocking on opening.

The safety is tang-mounted and consists of a simple sliding catch – forward (FIRE) rearwards (SAFE) with bolt operation. A nice set up on a standard stock, but on this thumbhole layout, as with all of this breed; you still have to take your hand off the pistol grip to operate this control. However, for me the advantages of this design outweighs this factor.

Though some Model 11s come with a detachable magazine, the BTH uses a fixed, floor plate system with the release catch at the front. Capacity is 4-rounds that feeds from a central position. What looks like the magazine release, as it sits in front of the trigger guard is actually the bolt release lug. To operate this the action must be fired, then you pull back the lug, open the bolt and remove it, on the way back in you have to pull the trigger before operating the lug.

As with all Savages the BTH comes with their excellent AccuTrigger unit. Essentially this is an idiot’s adjustable trigger. Offering weights from 2 ½ to 6 lbs via a single adjuster screw, the action has to be removed to do this but it’s no big deal. It’s impossible to set too light and offers what I consider one of the finest standard mechanisms of its type. Mine came from the box at 3 lbs so I left it alone.

The BTH stock is Savage’s usual good effort; brown laminate, big angled grip, generous thumb hole and high, roll-over cheek piece. Up front the forend tapers a little and is ventilated with the barrel being fully floated to the re-enforce. This section is rigid enough not to flex under a downwards load so ON/OFF a bipod makes no difference to point of impact or consistency. QD sling studs are fitted with the front one set well back to take advantage of this fact.

Given the above spec is how the rifle comes from the box, plus a 1/2x20” UNF threaded muzzle and proofing included it’s an attractive option, so let’s see how it shoots… I fitted a Nikon 2.5-10x50 scope in Warne mounts and rings, up front a Harris BRS bipod and a PES Muzzle Mounted moddy finished off the package. Ammo went to three loadings from Hornady 40, 50 and 55-grain V-MAX and a 50-grain soft tip from Prvi Partizan (PPU). With a rifling twist of 1-12” all would seem well suited to the BTH in this calibre.

Over the years I have tested a lot of rifles and you start to get a feeling for things and the BTH was no exception. As soon as I un-boxed it I almost knew it was going to be a shooter. Starting with the PPU showed it shot ¾”, which did impress me. The Hornady even more so with the 40 and 50 V-MAXs punching sub – ½” and the 55s just on the 0.5”. Shot at 100-yards off a bipod; not to shabby for a factory rifle!

Being critical as I am I did find the bolt lift a little heavy on the opening/cocking movement and the magazine given it feeds from a central position can be a little fussy to fill, though feed and function were 100%. However, I can forgive it that given its down range performance, ease of handling and high accuracy potential.

I must admit to not owning a 22-250 Rem and not testing a lot of guns in this calibre, so the figures generated were of interest, given this is a step up from the highly popular 223 Rem and one down from the 220 Swift. Here’s what the loads offered at the muzzle and at 300-yards, this last figure noted as speed/energy.

It’s plain to see that the Hornady 50-grain load gives the best figures so for me it would be a toss up between it and the heavier 55-grainer. However the better accuracy of the 50 also appeals. The 40 is doubtless impressive, but will be more of a potential barrel burner than the other three.

Given this is mainly used as a fox round the other consideration is windage and zero range. I tend to set my range as far out as is possible to give a no correction trajectory out to around 200-yards, as you really do not have the time to start calculating drop on the smarter targets; especially when lamping. Truth is an inch either way is more than good enough…

However this is all factory ammo and I would imagine that reloading might show some improvement, or at least allow for some fine tuning. A 224” bullet that I have always considered has massive potential is the Barnes, 53-grain TSX. This all-copper hollow point could make a great all-rounder for both fox and small deer species – muntjac and Chinese water deer. It offers the potential for good expansion and shock power with excellent weight retention and penetration abilities. Plus the extra power offered by the 22-250’s larger capacity could really show what the TX is capable of! Given the BTH does not have to go back right away I think I will do some experimentation…

Though I do not need another small calibre centre fire as I already own two 223 Rems and a 204 Ruger plus a 243, the combination of the Savage Model 11 BTH and 22-250 does make it an attractive option for foxing and small deer. Especially with its stock layout and superb accuracy potential. This is one nice rifle and available in a number of other calibres too: 204 Ruger, 223 Rem, 243 Win and 308 Win.

Perhaps the best aspect of the design is the fact it comes from the box as a real shooter; good trigger, practical stock and high accuracy potential. So to a greater degree justifying its £1000 price tag. All you need to do is scope it up and pull the trigger and get on with your life rather than spending time and money at the gunsmith to make it shoot better…