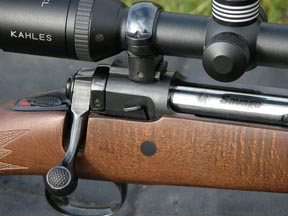 I must admit to not having a lot to do with Savage rifles since they changed hands in the UK to the new importer Garlands. I have looked at some of the .22 Rimfires; a tactical model and a heavy barrelled Varminter and that’s all. All good rifles and capable too, but as a deer hunter I wanted to check out the Model 11, as it offers a detachable magazine (DM) and the AccuTrigger - now included as standard over the whole range. So Garlands sent me the 11GCNS model for review.

I do like the facility offered by a DM system, though far from essential on a deer rifle, as once you’ve loaded through the top you aren’t likely to want a speed reload. It means you can carry the full mag ready to go and it makes loading and unloading a lot easier. It’s safer too, as the ammo goes in and comes out in one easy to handle package. Savage’s DM is of a most practical design and offers 100% feed reliability.

In my experience Savage’s laminate and synthetic stocks go from the bland to the slightly exotic. This Model 11 offers plain beech furniture with a medium/dark stain, impressed chequering panels and semi matte varnish finish. It’s a solid and workman like piece of timber. QD sling studs are fitted fore and aft, and there’s a slim rubber recoil pad on the low combed, ambidextrous butt. The feel is neither too big nor too small, with both pistol grip and forend filling the hands nicely, though for me the length of pull came up a bit short.

The barrel is floated in the forend, which proved pretty rigid in terms of support, so no real problems if you want to fit a bipod. You can run a sheet of paper between barrel and wood from the forend tip to the barrel nut. However, the 22” tube is quite light and -typical of its sporting weight - does get hot quickly, but then again I don’t suppose you will be firing more than two shots at any one time. Garlands are threading all the rifles they import as standard, which includes both Savage and Weatherby, though this example did not show it. Cut for ½” X 20 UNF and proofed, this will allow the owner to just buy a moderator and screw it on. They will also save at least £100, as they won’t need to get the barrel cut, re-crowned or proofed.

This gun has no iron sights but comes drilled and tapped for scope mounting. Garlands supplied a set of Warne bases and I fitted it up with a Kahles 4-12 X 52 multizerO, in Burris Signature rings. Unsurprisingly a Harris BRS bipod went up front - a make and model I tend to fit to all my long guns. The barrel is 22” long and button-rifled. Chambered in 243 Winchester the rifling twist is a reasonably fast 1-9.25”. I ran two brands of ammo through it; Remington 100-grain SP Express Rifle and Winchester Supreme 95-grain Ballistic Silver Tip.

I have to say that visually I do find the Savage bolt-action mechanism and layout a bit un-lovely and clunky. The bolt lever is near straight with a pad of chequering on the front face of the ball. The head locks by two large lugs and fully supports the case head. The ejector is of the spring/plunger type, which is the most efficient design, as it’s not reliant on how fast you cycle the action. Feed and function was excellent, with nice features like the ambidextrous safety catch and AccuTrigger, as I was to discover.

Weighing in at 6.75 lbs (un-scoped) the Model 11 is light and reasonably compact and suits 243 Winchester nicely. It’s available in a number of other calibres - 22-250 Rem, 243 Win, 7mm-08 Rem, 308 Win, 270 WSM and 300 WSM. All reasonably well behaved apart from the last two, which in a light gun such as this might prove a bit of a handful. Admittedly these last two short mags add a ¼ lb to the weight and an extra two inches to the barrel. Here it might be a good idea to consider a moderator, or at least a muzzle brake. Capacity wise the magazine offers four up to 308, then just two with the WSMs.

Quite the cleverest thing about all new Savage rifles is the AccuTrigger. Originally only fitted to specific models, the whole range now benefits from a foolproof solution to what has always been the curse of factory rifles – a heavy trigger, which is intentional in most cases to avoid legal liability problems. However, if your gun’s mech is too heavy it can seriously affect accuracy, with the only solution being to either have a go at adjusting it yourself, or pay a professional to do it for you. The first is fraught with danger; the second will cost you money.

Savage has done away with all this with a mechanism that can be safely adjusted even by shooters with the technical ability of a sack of potatoes! The job is simple – remove the action from the stock and with the adjusting tool and instructions (supplied) wind in/out on the screw at the rear of the mechanism to increase/decrease the pull. Savage say that the weight goes from 2.5 lbs to 6 lbs and it can’t be dialled below the minimum setting.

My gun came out of the box at 3 lbs, which was nice, so I left it alone. The trigger blade is distinctive as it is Glock-like in design. The main blade is as before, but inside this is a lever (AccuRelease) which has to be disengaged first before the blade can move rearwards. This is a natural action, as the finger automatically presses this in as it settles for the shot.

If for any reason the blade is pressed without the AccuRelease being operated first, the trigger goes into a safe mode. This might happen if a twig were to rub against it for example or the rifle was dropped from a high seat. In this condition the mechanism locks up and won’t work. All you do to re-set it is lift the bolt handle and push it down again.

Visual indications of the gun state go to the flip-up lever at the right rear of the action. With the mechanism un-cocked this sits low, but when cocked it sits up high and at a sharp angle. Likewise, the AccuRelease sits to the rear of the blade, but is fully to the front when ready to go. The tang-mounted safety is easily operated by the firing hand thumb with minimal change of position; slide forward (FIRE) exposing red dot and reverse for SAFE. This only works when the mech is cocked.

Bolt removal is just a tad awkward, as you have to depress the cocked action indicator plate at the rear right of the action and at the same time pull the trigger. Reverse this action to reinsert the bolt.

The magazine is steel with an alloy base plate and in 243 offers a capacity of four, with a staggered column that leads up to a single/central feed position. Filling is done from the front with the base of the round slid into the feed lips then pushed down to insert the next one; and so on. The release catch is at the front of the well in a cut-out section and consists of a large and easy to operate catch, which is no problem to work even when wearing gloves. The clip literally springs out, so be ready to catch it. It fits rear first then snaps down to engage against spring pressure, where it clicks in positively.

So with all that out of the way we are ready to go. As ever I tested at 100 yards, which is a sensible zero distance. The trigger pull is just a bit different, as you first have to release the AccuRelease, which is automatically done as you place your finger on the main blade. With that taken up you come up to the main weight and simply pull through in the approved manner. After bore sighting, and from a cold, clean bore, the Remington 100-grainers printed a 3-shot group into 0.75”, which I thought was excellent, with the 95-grain Supremes beating that with an impressive 0.62”. Then the barrel got hot and things opened up to an inch with the occasional flyer. Again expected and not a criticism. The truth is, on any sporting-weight barrel when the tube gets hot, the groups open up. But given we are deer shooting then if you need three or more shots for one animal; maybe some remedial accuracy training is required?

Recoil was pleasant with feed and function 100%. Out of interest I put both loads over the chrono, then through my Sierra Infinity V ballistics programme; with the Remington giving an average of 2892 fps/1896 ft/lbs of energy and the Winchester 3032 fps/1938 ft/lbs.

Overall I came away most impressed with the Savage Model 11GCNS, as it turned out to be a well made and most shootable rifle. There are 18 models in what Savage calls their Hunter Series. You have the choice of synthetic or wood stocks, floor plate magazines, stainless steel build, iron sights, left handers, youth rifles, more calibre choice and even shorter barrels. But for the UK deer hunter it’s really down to 243 or 308 Win and 7mm-08 Remington. My choice would be the 22”, synthetic stocked version with a D/M in 7mm-08.

Given that Garlands will now be offering the Model 11 GCNS screw cut and proofed as I mentioned, then the price is a good one, as is the rifle.