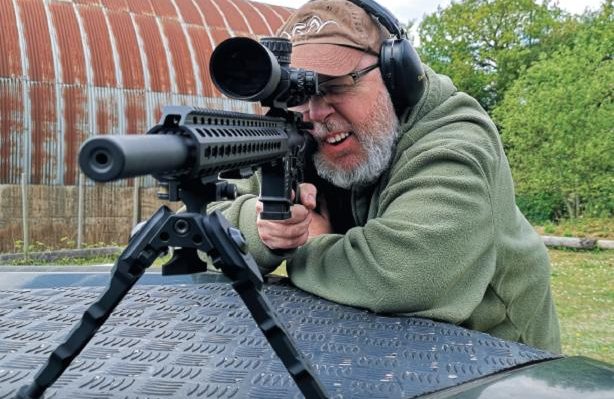 I think it was IWA 2018 when Mark Swift (RUAG) asked me to go to the Schmeisser stand and take a look at their straight-pull AR15 rifles. It was a well-presented design in the modern style; heavy barrel, free-float forend, flat-top upper receiver and ambidextrous controls. The one thing it lacked was a side-cocking mechanism, a feature I consider essential for any gun of this type, but it did have an enlarged ambi T-handle. I managed to track down their R&D guy and asked him, why not?

He explicitly stated that the rifle did not need it and runs fine as it is. I pointed out that in terms of primary extraction (unsticking the hot, fired case from the chamber) it would never be as easy to operate as a side-cocker. We begged to differ, and I departed thinking why bother? I reported back to Mark and he said he was working on it but was not sure of the outcome.

Later he sent me the T-handle only, Ultra Match STS version and it proved to be reliable, tolerant of primary extraction over a number of ammo types/weights, but slow and less instinctive to operate. With a price tag not far south of £2K, why would you bother, considering that the likes of Southern Gun Co (SGC) offer similar products, but with side-cocking?

The brand appeared to fall off the map in the UK and I thought no more of it. However, at BSS 2020 on Edgar Brother’s stand was a rack of Schmeisser ARs, with large side handles. Called the SP15 (straight-pull) it seemed someone had obviously woken up to the idea.

The gun on test is an Ultra Match with a heavy, 1” diameter, 1:8” twist match-type barrel, sitting in a slim 15.5” M-Lok forend, with a long Picatinny rail at 12 o’clock that aligns with the one on the flat-topped, forged upper. Two short Pic sections are included for accessories. The lower is standard AR, but with a hinged, bowed, fold-down trigger guard bow.

It’s not uncommon to see ARs with a few ambidextrous controls, but Schmeisser has gone to the max. The safety is the usual type; flips up to FIRE and forward for SAFE and is marked with the HK-type pictographs of a red bullet for go and a white one with a cross for stop. The standard mag button has been augmented with a larger round add on, along with a left-side lever. The slide release is located on the left side upper but shows a bigger thumb paddle, unusually there’s a push-down lever on the right above the mag button. This one is a little odd as it’s very near the new cocking handle as we shall see.

The usual side-cocking design we mainly use in the UK features a raised block screwed to the bolt carrier that supports a long rod, at the end is either a straight or angled handle. Schmeisser has gone a slightly different route, with a socket machined out of the right side of the bolt carrier into which a lug with threaded hole fits, to this a long handle with a big ball end screws in and angles down and out at 45º. It’s well-positioned with the firing hand falling to it naturally, operation is easy and instinctive.

The side of the receiver is slotted to allow the handle to cycle and it’s easy to remove as a sprung plunger holds the lug in position and all it needs is to be pushed down to take it out. Better than having to unbolt a UK-style unit. I have two observations here; 1 – the right side bolt release catch is under the handle and it feels odd as you operate it to have the handle slide over your thumb at high speed, 2 – continuous operation required on a straight-pull action could accelerate wear of the lug in the socket. Plus being a R/H thread, the handle could become loose, but a dab of Loctite would cure that.

Furniture consists of a slim A1-type, rubber pistol grip with a thumb web infill at the top. In use, I found this places the hand and therefor trigger finger too far forward for a comfortable first pad position. Schmeisser calls the fixed butt an A4-type and it looks like the standard A2 unit with most of the underside cut away to form a useful hand stop, which means the rifle can be easily pulled into the shoulder. The comb is widened and offers a good bit of cheek support. However, the weirdest thing is the spare, 10-round magazine stowed inside.

It inserts through the rear of the butt and is retained by twin latches that engage with holes on the sides of its base plate. It’s covered in ribbed rubber, to match that of the shoulder pad. To remove; press both catches simultaneously, and the mag will click, then you have to push it up before you can pull it out. Not the quickest of operations and the second mag (included) does not offer this facility nor does it lock in place. Schmeisser would have been smarter to copy the FAB Defence system that stores a spare vertically in the underside of the butt using the standard AR retention system.

I ran three loads through the SP15 (See Ammo Table): Hornady, factory, 75-grain Steel Match, their 68-grain BTHP Match and my pet AR reload, a 69-grain Sierra TMK (Tipped Match King). The Steel Match was producing an average speed of 2680 fps, with a high extreme spread (ES) of 109fps but was all over the place in terms of accuracy and showed hard extraction. The BTHP Match was shooting .75” and producing 2888fps with an ES of 65fps. The reload printed a cool 0.5” at 2878fps and produced an ES of 69fps, but with hard extraction again. This last one was surprising, not for the good accuracy, but for the hard extraction, which it never did in my SGC Speedmaster.

Angle of the dangle

Another anomaly I found was where you gripped the side cocking handle and the angle of which you addressed it. Pulling it down and back resulted in harder operation, straight back was much improved, which on reflection could have influenced the hard extraction. As when using the T-handle it ran smoother.

My biggest beef was its short 13.25” length of pull, which also does not help the aforementioned hand/trigger finger position. Better than the spare mag storage, which I consider more a gimmick, would have been a series of LOP spacers to suit various arm lengths. They could then just chuck another 10-rounder in the box. Overall, the SP15 feels, operates, and handles nicely, given you get the pull angle right. The trigger uses a low mass hammer and offers reasonable operation, with a short/soft take-up and a reasonably crisp 4 lb break. With the right ammo, accuracy is doubtless there, but the barrel is no lightweight and would be better suited to more prone use. To put it another way; standing unsupported for a 20-round string might be a tad tiring!