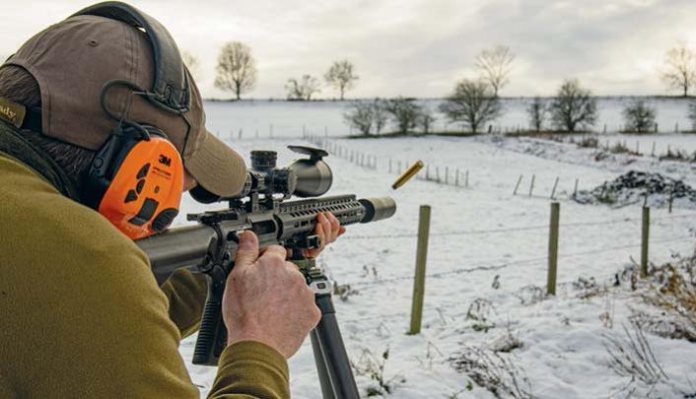 I have always been keen to see how a straight-pull AR- 15-type rifle crosses over for foxing, and Schmeisser’s SP15 in LMR format looked ideal. The short overall length of 36” makes it incredibly portable, with the 18” barrel extending just ahead of the long, 15.5” tubular forend. The Walther barrel is screwcut ½”x28 and a laterally ported brake is supplied. This is shimmed so if you remove it, it’s easy to replace and tighten securely with a spanner, locking securely back in position without affecting zero. The crown is crisply cut and after initially zeroing the rifle with the brake, just to try it, the already minimal .223 recoil was reduced. I then swapped to a muzzle mounted, DPT six baffle moderator. This all-aluminium unit weighs 220-grams, measures 168mm in length and has a 43mm diameter. It can be stripped for cleaning and offers significant sound reduction.

Lothar Walther’s 22mm, ‘Match grade’ barrel has a 1:9” twist rate and six external flutes. It was well finished internally, cleaned easily after an initial run-in, and l expected it to handle .224 bullets weights up to 69-grains. A Picatinny rail runs the full length of the Handguard’s upper, for accessory mounting, and there are M-LOK slots on the sides and underneath for other fittings or additional Illuminators, in the case of night vision usage. Schmeisser supply a small Picatinny adaptor that locks on here, to which I fitted a QR Atlas Bipod for target tests.

The Picatinny rail shows a junction as it reaches the action and since I prefer to keep all mounts on one section, I used Hawke Reach Forward mounts to mount a 3-15x optic. It’s the rearward positioning of this rail atop the drop forged, 7075-T6 aluminium action ‘upper’, that makes AR-15’s so attractive to a wide variety of optical solutions, from thermal to red dots, with the most rearward rail slot vertically above the trigger. This is around 50mm closer to the shooter than on a bolt action centrefire of equivalent calibre, and with short reach NV mounts, can show significant benefits.

The push-feed bolt face shows a plunger ejector and claw extractor, all rotating within a bolt carrier, whose final linear flow cams it rotationally into battery, to lock the action closed. Schmeisser supplies their ‘Raptor’ style charging handle, which clicks into the right side of the bolt carrier with a small, sprung detent bearing. This offers incredibly fast access to literally ‘grip it and rip it’ for fast reloads.

The upper and lower are separated when the captive pins are slid through left to right, but for everyday requirements, you only need to push out the rear pin and the action hinges open. The bolt carrier and residual T-Handle slide out and disengage from each other, giving unrestricted access to cleaning the barrel and action internals, but you need to remove the Raptor handle to completely withdraw the pair.

The hammer and trigger mechanism are all easily accessed for thorough cleaning and Schmeisser supply a pull-through cord and zippered cleaning kit within the combination lockable, full-length case. There’s also an orange chamber plug to signify the gun is empty. Schmeisser’s Raptor handle is significantly quicker than the T-Handle, which locks in position unless withdrawn manually. It doesn’t reciprocate with the bolt carrier, so you can keep your cheek planted on the stock. Standard twin column AR-15 mags are compatible and two 10-rounders are supplied, with the additional one slotted into the butt plate, which is very handy. It locks in with a bi-lateral release catch and springs out when released.

The rifle shows AR controls, with the magazine release button ahead of the trigger guard, on the right side of the action. The safety catch traverses through the action and is operable from either side, flicked through 45º by the thumb, showing red for FIRE and white for SAFE.

The mag holds the action open after the last round, as its polymer follower operates the mechanical steel bolt stop. This can be released to close the action by pulling the bolt handle and releasing it with a full magazine fitted. There is also a left side paddle that disengages the bolt, plus a serrated lever just below the ejection port on the right side. Just watch out when using the latter, because you will want to ensure that the Raptor handle doesn’t clash with your digits. There is a right way to use it.

The trigger is a 2-stage unit. It’s 95% crisp in operation once the second stage is reached, which is totally practical and pleasant to use. Pull weights are around 700-grams for the first stage, followed by 1700-grams for the second. The large hammer within ensures the firing pin and primers get a good thump, thus ensuring reliability. Extraction and ejection were reliable, the latter incredibly enthusiastic in fast-fire conditions, where the ability to grasp that Raptor handle meant you certainly cycled the action with great speed. None of the ammo tested showed any hesitancy during primary extraction, where the internal rotation of the bolt on its cammed carrier take the place of a larger handle on regular turn bolt rifles.

Unsurprisingly, this rifle sports an underslung AR- 15 grip. It’s a fairly simple, comfortable and tactile rubberised unit, offering a 64mm reach to the trigger blade from its throat. The polymer stock wraps the buffer tube and offers bilateral QR sockets for a sling. The spacious underside shows plenty of room for the non-firing hand, allowing it to manipulate a rear bag and lock the gun into your shoulder. A slot for a rifle sling threads through the bag rider.

The length of pull is 13.5”, so quite short for a sporter but defiantly ‘AR’. The recoil pad adds a slightly rubberised texture to the butt plate and its central magazine, which if you swap for the one in the action, you lose out on. Then again, this is a .223 with brake supplied - grip is more a factor than physical protection from recoil.

M-LOK versatility allows whatever slings or additional illuminators you like, to be added on the forend, which is attached securely, without rattles, in front of the action via three pinch bolts with anti-rotation tabs.

The most consistent ammunition was 55-grain Hornady V-Max Varmint Express, managing sub-MOA on my 100m range. The 68-grain match ammo was within the magic minute and unsurprisingly, the 73-grain ELDM ammunition, although not keyholing, couldn’t meet this desirable threshold. A 1:8” twist rate is needed for bullet weights above 69-grains and I have seen the SP15 incorrectly advertised as having one in some locations, but it most defiantly has a 1:9” twist rate.

Velocities were obviously affected by the shorter barrel, some 4-6” less than many factories would test their ammunition with, so this is an accepted condition of shorter, more portable rifles, that will still do what’s needed when it comes to targets or pests.

I have never owned an AR- 15, but have become drawn to their performance as their influence permeates the shooting industry. I can’t, not appreciate their design longevity, with only minimal evolution in terms of fundamental performance, yet massive attention to ergonomic interaction for new sports and users.

In use, I did experience a few dead man’s clicks with a slowly closed bolt, but as the action has run in, this now seems less of an issue. It’s never going to be as quiet as a turn bolt, but it certainly performs as desired, with an unnerving ability to withstand tough handling and the elements.

The Schmeisser certainly lives up to its ‘Made in Germany’ inscription with distinct mechanical purity. There is something indescribably homogenous about a tool that emits a soft ‘ping’ as the action cycles, to illustrate its thorough integration of tolerances and materials. I’m hanging on to this rifle for a while because I really want to give it that full chance and the thing is, first impressions were really good because I like shooting it, and I’m a hard man to please because I have access to so many rifles. I want to use it on steel and push the ranges out further. It’s a relaxed and stable gun to shoot, plus it sits well on the bipod for prone shots, with a desirable versatility if improvising positions. The free float barrel will never suffer from intermittent contact and to carry, that short overall length is very hard to ignore. Now, which NV scope shall I add?