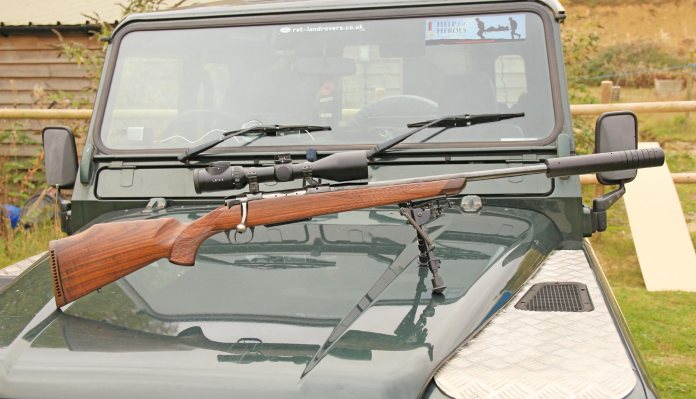 If you mention the name Schultz & Larsen (S&L) to most European shooters you will get an immediate and positive response, but they are less well known in the UK. However, I knew they were something special, as a Norwegian shooting friend raved about them, which was good enough for me! This is now changing, as Alan Rhone has just picked them up and on test is their Victory model and believe me it was a real pleasure! Before I start, there are four model options available – the Classic is described as a working rifle, the Victory is more your top end item, the Legacy is a compact chambered in 222 and 223 Rem along with 300 Blackout and finally the Tactical, which as the name suggest, is a heavy barrelled longer range option, that comes in an adjustable GRS laminate stock. All rifles offer a switch barrel/calibre facility.

Visually, all the rifles, with the exception of the Tactical, appear to be traditional wood-stocked sporters, which is not really my cup of tea. However, I learned long ago that looks aside, what really draws me to any firearm is its ability to perform and Schultz & Larsen does not disappoint!

The receiver is all-steel and shows S&L’s integral, Slide & Lock mounts, which use their simple and effective QD ring system, which is operated by a #15 Torx key. There are two length positions for each ring as to eye relief; given you are wearing light (summer) or heavy (winter) clothing. The action is also drilled for Weaver bases if you prefer. Importers Alan Rhone told me they are working on a Picatinny base to allow the use of night vision scopes. The bolt and barrel change is reminiscent of the Sauer 202. The former being a single, solid body with three, big locking lugs and a long and nicely swept back handle giving a 60° lift and quite possibly the smoothest action stroke I have ever had the pleasure of using!

All barrels use the cut rifling method and are stress relieved and do not seem to suffer from group dispersion as they heat up, so we are told!

Barrel retention is by a ‘pinch’ system with twin cross bolts that close a slot machined at 6 o’clock in the receiver around the ‘chase’ (parallel chamber section). Indexing is by a cut-out at 6 o’clock, that engages with a lug inside the action. S&L include a T-key that also doubles to remove the action bolts, so that you can take the barrelled action out of the stock to facilitate the swap over. None of these bolts require a torque setting, as the key has a deal of flex in-built that acts as an indicator of tightness.

Barrels are 22” long and 17mm diameter and come threaded 14x1mm with a muzzle protector. The bolt directly engages with the chamber extension, this fact, combined with the steel receiver, makes for one seriously strong action! However, S&L has incorporated twin gas relief ports either side of the receiver and three more in the bolt body. In the unlikely event of a case letting go, the shooter is well protected! All the metal work is deeply blued to a very high standard. There are also options on barrel fluting, both straight and spiral.

Feed is from a 3-round, single-column detachable box magazine – a 5-rounder is also available. The release is a button at the front of the well. The bolt cocks on opening and shows a cocked action pin under the shroud. The safety is a 3-position lever rear/ right of the action – forward FIRE, middle SAFE with bolt operation and rear SAFE bolt locked. The single-stage trigger is adjustable for weight and length; mine broke at 2.5-3lbs and was ideal. The bolt release catch is located rear/left of the action.

The stock on the Victory uses a nice piece of oil-finished (linseed) walnut even in the standard version; mine was Grade 2, which adds a bit to the price. The layout is classic, with a raised comb and cheek piece with rubber recoil pad (length of pull 14”). The grip is nicely angled with a palm swell. Chequering is machine- cut but to a high standard and offers a good hold without being too aggressive. The rectangular section forend is full but tapers and shows a rosewood cap, as does the pistol grip. QD sling studs are fitted as standard. S&L offers the Victory in a true left hand version too.

Inside the action void is synthetically bedded, but does not use pillars, nor is the barrel free-floated; neither omission, as I discovered, seem to make little difference to performance! Weighing in at 3.6 kg, the Victory gives the impression of a well engineered and built design, in an ‘old school’ style and one that impressed me a lot more than I thought it would.

CALIBRES AND ALL THAT

For the test I was supplied 22-250 Rem and 308 Win barrels along with a Zeiss 3-12x56 Victory Varipoint with ASV turret and a spare set of rings. In these I fitted a Leica 3-12x56 Magnus also with ASV-style turret. Alan Rhone also sent me a cross section of S&L moderators, both fullbore and rimfire, which I will be looking at separately next month, but I used two for the different calibres, which worked efficiently.

The 165 GECO was by far the best, shooting .75” @ 100m, with the Hornady doing 1” and the heavier Remington and Lapua just stepping outside that but not by much. Given most 308s can be a bit kicky, the Victory, even un-moderated, was very well behaved, stock geometry has a lot to do with this and they seem to have got it right! Obviously different brands of ammo might improve those figures and I’m sure reloads would squeeze out maximum accuracy but I reckon around the inch +/- is more than acceptable.

In 22-250 the PPU shot well at .75-1”. though I did experience some last round ejection problems. If I worked the bolt too slow, the final empty would fall off the extractor claw, I have encountered this before in my Mauser M03 in 223 Rem. A bit of research showed that it happens with small neck calibres in larger actions and is not uncommon. As the empty clears the chamber, pressure from the plunger-type ejector rotates it too far to the right and too soon, and it loses contact with the ejector claw and falls off. This does not happen with a fixed, rear-mounted ejector, as the claw is allowed to hold the case securely until it’s kicked off at the end of the bolt stroke. This is purely calibre-related, as I had no such issues with the 308 barrel and that uses near enough the same case body!

I shot both barrels hot and pleasingly groups were not that affected in terms of consistency and size as they said. Now for the acid test – scope off/barrel off then on again. S&L’s scope mounts passed the test with flying colours, despite their simple nature when compared to more expensive systems.
When I changed the barrel and re-fitted it I had a group shift (though no group size increase) of around 1.5” low and 0.5” left at 100M. In fairness I have had similar with the Sauer 202 and the Rossler Titan, these and the S&L all using a very similar barrel retention system! Truth is it’s only a fool who does not check zero on any switch barrel system after reassembly and before hunting! I always do with both my Blaser R8 and Mauser M03. However, I do not see this as an issue, as it’s just the way it is, and it would not influence me if buying a Victory or any other in the range. Summing up; this example has to be one of the best, traditional-looking bolt-action hunters I have ever used! Now for a niggle; where’s the synthetic-stocked option?