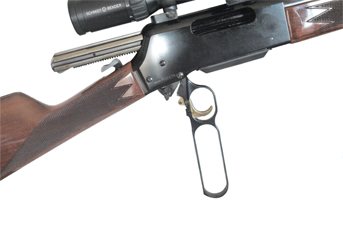 Lever-action rifles are still defined and perceived by the Winchester name and apart from pistol-calibres, which gained popularity after the handgun ban; the true rifle-calibre designs have found little favour with we British. We are just not lever gun shooters and the majority of what I would call ‘fullbore’ calibres are again not what we think of – 30-30 Win, 444 Marlin, 45-70 and 450 Marlin etc. I was visiting with a friend recently on a work-related matter, who has an RFD for his job and asked if he had anything unusual that I could write up for this series?

He brought out something I had not seen in this format before - a Browning BLR (Browning Leveraction Rifle) Lite. The BLR is a curious beast as despite looking reasonably classic it is in fact a totally modern design when compared to the traditional Winchester 94 and Marlin 1894 guns. I suppose it caters for the American love of lever-actions and combines it with the ability to handle some modern, high power and ballistically superior cartridges with its box magazine. Unlike the tube magazined Marlin, which has to use flat-nosed bullets for safety reasons as recoil could set the rounds off as they are stacked point to primer.

Like I said the Lite is classic looking and shows features like a straight-hand stock and iron sights and there is no safety catch either! Closer inspection shows an aluminium alloy receiver drilled and tapped for scope mounts, feed is from a detachable box magazine and the action uses a toothed quadrant attached directly to the operating lever, This engages with teeth on the underside of a long bolt carrier that houses a rotary, 3-lug bolt, which is a bit AR15-like, even down to its sprung plunger ejector. The action stroke feels like it’s on rails and driven by a motor; as the bolt slides back and forth fast and easy and in comparison to my Marlin 1894 in 357 Magnum is really smooth.

The Lite is chambered in 300 WSM (Winchester Short Magnum) which struck me as a big cartridge for what is a compact, 21” barrelled carbine. The iron sights have been removed and a Holland Hi-gas muzzle brake fitted, which was probably a very smart move. I asked how it shot before the brake and he said: ‘Barky!’ Browning doubtless recognised this too as they fitted a thick rubber recoil pad as standard. Even after this bit of what I consider mandatory surgery I found it quite lively and wondered if ‘barky’ really covered how it felt from the box?

As I said the BLR series has no applied safety catch, technically it does not need one as Browning provides its own solution. The top section of the hammer (thumb lever and nose) hinges forward so pulling the hammer nose down and off the tail of the firing pin. So you can chamber a round, drop the hammer to half-cock, push the top section down and carry in safety, to shoot just thumb it back. In use it feels odd and despite the fact it’s mechanically safe, not having a separate safety catch is disconcerting. Another anomaly is that the trigger mechanism is pinned to the operating lever so moves with it.

The Lite I was told was bought for boar shooting as the 300 WSM generates a good 3000 ft/lbs with a 180 grain bullet, with Winchester’s old Fail Safe being the ammo of choice. This uses a Nosler Partition-like construction and something I can imagine is highly effective with good speed and bullet mass retention. It would be equally as good for large animals included African plains game and the like. This BLR however has never seen action I was told, as it was not until a few years later that my friend actually got into boar shooting properly and by that time had a Blaser R93 in 30-06.

The BLR sits in a gun box and does not get to see the light of day that much. It’s fitted with Burris bases and turn-off rings but the scope has been taken off and put on a rifle that is used more. I fitted an S&B Zenith compact for my shooting session and recoil aside it did OK, though it was no tack-driver! But good enough I presume for large and fast moving targets up close?

Chambered in the powerful 300 WSM I wondered if the 21” barrel was a bit short to allow the cartridge to reach its full potential. I was told tests with a 24” 300 Win Mag showed a drop of only 100 fps, which is acceptable. Bolt removal is easy, but replacement is tricky as you have to offer up the lever so its toothed quadrant engages with the rack on the bolt carrier when its fully forward and locked. My friend took it apart once and never quite got it right, so when the lever was shut the bolt carrier was still about ¼” from full engagement. Despite many tries he could never get it right so sent it back to Browning UK who sorted it, and now cleans from the muzzle.

The BLR is an unusual rifle and I doubt if there are that many in use in the UK, even in more sensible calibres. They make adequate deer guns, but the external hammer and lack of applied safety will not appeal to your average Brit. The more compact dimensions and reduced weight of the Lite along with its straight-hand stock makes it even more specialised and the calibre is for larger animals too. Doubtless it would make a great boar rifle, but little else! So what’s it worth? My friend reckoned he’d let it go at £550 with some ammo thrown in!