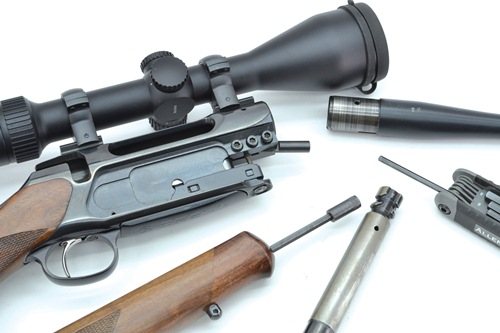 Chambered in the old faithful 308 Winchester and one of a series of rifles bought, bore-scoped and assessed for wear & tear and priced appropriately. The 202 features a switch barrel and can be further equipped with anything from 22 centrefire tubes and bolt right up to dangerous game calibres with magnum bolts. The rifle comes with an extended 5mm Allen key bar to remove the forend and then simply back off the tension on the three 4mm tenon clamp bolts and out slides the barrel with a firm heave.

Reverse to add a new tube, taking a few seconds to align the barrel with the forend hanger and then simply close the bolt home to accurately position and headspace the barrel. Nip up the bolts, re-attach the forend and off you go hunting. However, a check zero is always a sensible idea first on this sort of system! The metalwork could be described as mint other than faded bluing on the spoon handled bolt which just adds character to my mind.

None of the fasteners or fixings were marked and other than a few small dings here and there on the straight grained walnut stock, what is not to like at half the price of a new gun? The 22” barrel was screw-cut 14x1mm at the factory and proofed! The rigid forend floats the tube all the way to its elegant capped Schnable tip, concealing a QR sling swivel to pair up with its twin under the butt.

The trigger broke cleanly at 3lbs with the 14” length of pull ideal for multi-position shooting. Chequering at the grip and forend is a little smoothed by time but the right handed palm swell fills the hand delightfully, the gun rising to the shoulder like a shotgun with slim Monte-Carlo comb and inch thick recoil pad handling the kick gracefully.

I fitted a sling stud to the forend for prone bipod shots and can confirm it’s stiff enough to remain stable in this mode. A 3-shot magazine drops clear of the stock with a single release button to its front, bolt release sitting beside the trigger guard with ample room for gloves and the bolt cycles quick and smoothly with its six locking lugs. Sauer’s safety is unusual in that you press a button behind the bolt shroud for SAFE and a second protrudes forward of the trigger to engage FIRE but both are quiet and fall readily to thumb or fingertip.

I have run the gun on 150-grain soft point ammunition cruising just below 2900 fps with accuracy stable at 1-1 1⁄4“ for 4-shots at 100 yards, perfectly adequate for a hunter! At 42” overall length and 9.6 lbs scoped up might not sound super-light but the solidity and precision on offer meet my needs half way. My hand went all the way to the wallet on this un-missable deal though!