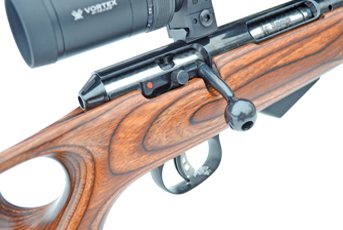 I tested the thumbhole laminate version of the Savage Model 25 as I prefer a stock that is stable and unlikely to affect the barrelled action in use. It is a compromise of weight and portability but to test the 17 Hornet calibre itself, I wanted to exclude all possible variables and as a walk and stalk hunter most often shooting prone, it also fit my needs perfectly. The editor has covered the rifles basic features and operation already so here are my thoughts.

I like the trigger and ergonomics of the stock even if a little short in length of pull at 13 ½” for prone work, it fitted nicely when sitting though. I found the trigger crisp and consistent with its performance pleasantly concealing a 3 ¼ lb initial pull weight, which I have now reduced to its minimum designed 2 1/4 lbs. The magazine system loads easily into the gun and the quality of the stock inlet is excellent with minimal bedding stress applied to the action. It is sturdy with no flex or movement and the stock is a perfect platform for a synthetic bedding job if desired, a modification I always believe to improve a gun’s consistency.

The longer 24” barrel didn’t increase velocities though, mine achieved 3554 fps with the 20-grain Hornady Superformance factory ammo. I have witnessed and read of others achieving the 3650fps promised on the box but the bolt lift on the 200 rounds I was sent seemed just a touch lighter than the first ones I shot a year ago, maybe Hornady have just backed off a little? Threaded ½” UNF from new is a smart move by Edgar Brothers with the recessed crown neatly finished off. I was sent the specific 17 cal Hardy Gen IV moderator along with the gun and although I’m no believer in the moderator/muzzle brake theory, the lightweight unit was perfect for the gun, adding only 3” and 306 grams to the 43 ½” overall length.

I was very sceptical of the cartridge as the 22 Hornet parent case has characteristics that make its reloading life somewhat unique. Well I was very wrong, the ammunition has proven accurate; consistently sub ¾” at 100 yards and contrary to opinion, not at all fussy over cleaning regime though all barrels can have their own personality in this respect. I reloaded 20 and 25gr V-MAX bullets with the supplied Hornady dies with no problem at all, just a little more care required with the brass being so very tiny.

The factory brass had one Achilles heel, the primer pockets were too shallow for either Federal or CCI primers and required uniforming for consistent seating, a one-off job yes, but very time consuming! Ramshot Enforcer and Hodgdon H4198 have been the powders showing best results for the 20/25’s respectively and I would have liked to have tried more Berger 25-grain Match bullets but the feeding cycle of the gun did not agree kindly with their meplat design. When single fed (very awkwardly) they shot the smallest groups of any bullet with H4198 driving at 3100 fps into sub-1/2” holes. The 25gr V-MAX at 3200 fps handloaded with H4198 is my long term choice for hunting. Bolt lift and primary extraction very quickly became hard when pressures were pushed too high, a solid warning!

Testing in the field left two distinct opinions. The calibre is a fantastic bunny basher for the lower volume shooter who has the requirement to take longer, more considered shots. It has proven less wind fussy than I expected and the Hardy Gen IV moderator makes the report from the gun a minor factor, it is a delight to shoot with bullet impact splash easily spotted too!

The slightly clunky feed cycle from the mag is a downside, making it unable to feed a round slow, smooth and quiet, only a fast firm bolt stroke will do. You have to load the gun well in advance of the quarry’s detection range although fast reloads for a `left/right` shot were fine if the known procedure was followed firmly.

I used the gun at dusk on rabbits as far as 210 yards with 5-10mph changeable winds on my most successful outing with 16 rabbits for 18 shots using 20-grain factory ammo. I haven’t encountered a fox yet but my gut feeling is that I won’t take a long shot, perhaps 100 yards maximum. Inspection of chest shot rabbits has shown a consistent reduction in carcass damage relative to distance without the explosive nature shown by 22 centrefires, the bullet definitely shows more controlled expansion.

I must run some internal ballistic parameters through Quickload as I would personally have the gun with a shorter barrel, perhaps 18-20”? I liked the stock but would specify a non thumbhole version as I often shoot left handed when tempted into a vehicle for lamping, either off the roof, bonnet or wing mirror.

Most of my shooting is fairly urban so the quiet nature of an 11-grain powder burn is very attractive for me and the public at large! The 20 and 25-grain bullets perfectly matched our most numerous quarry species. With no more noise and maybe 100 yard effective range increase over the 17 HMR, it could make a very effective carry gun for a keeper vigilant for Corvids, especially if nervous livestock are close by. It only dawned on me just how gentle the gun is when I returned to my car and realised I had shot over 70 rounds through it the first day without any hearing protection on. Not to be recommended, but the fact I never realised illustrates my point.