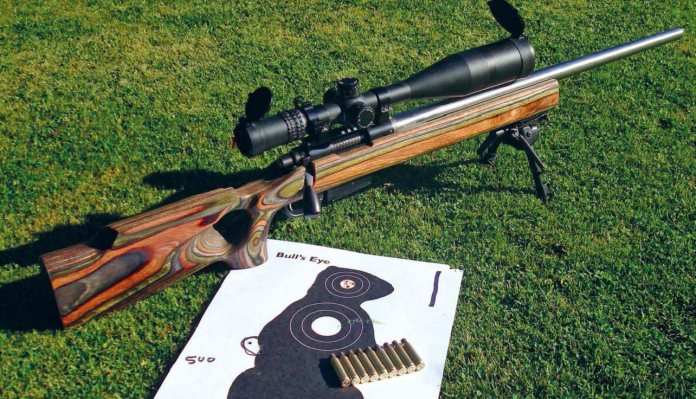 I suppose calling any rifle ‘semi-custom’can begin from the day you make changes to your box-fresh factory gun. It’s rather difficult to encompass all the options in three pages, so I thought perhaps what was best was to illustrate how my customisation path began, from the day I got my first semicustom rifle and how I went about it. The options for individual components are not quite limitless but Remington 700 and Tikka T3 actions are possibly the easiest to live with. The former is certainly the longest standing and a lot of custom action manufacturers have copied the footprint/dimensions to ensure their new products are compatible with the vast array of Rem 700 accessories already available.

I started my journey with a re-barrel of a Sako 75 rifle in .22-250, which through extensive use, eventually wore out. However, even though the new .22BR barrel I had fitted made it sublimely accurate, I fell into the trap of ignoring usability. The fact the magazine feed was never quite reliable soon made me realise that all that glitters is not necessarily gold, and that long-standing factory cartridges remained that way for a reason, so think through your choice.

My next venture, after adopting a larger centrefire for combined deerstalking and target use alongside the BR, was a Howa .308 Varmint. This didn’t really last long, as the gun never shot or handled very well and once I looked into stock options, there were not that many available with the required inlet. Plus, the bedding requirements were undesirable. Unlike now, chassis systems were not freely available overnight 15 years ago, so I switched to a Remington 700. It was my very first (which I still own) and I never really looked back. It’s important to say, Remingtons were the first rifles to develop a string of aftermarket parts and although popular, are not necessarily the best, perhaps far from it, but what they offered was an easy life, triggers, stocks, scope mounts and magazine systems that were readily available at all price points.

I enjoyed shooting my .308 Remington VSF. I found it accurate and reliable and then wanted to see where I could further its path. I changed a few stocks that were bolt-on factory options, so learning about action stress, then bedding with epoxy and using pillars to ease said action stresses, vastly improving consistency. This combined with getting a Richards Microfit laminate stock from the US at the same time as I decided to go all in and have a new, heavy barrel fitted. I was now beyond my mechanical knowledge and tooling capabilities, so I sought out Dave Wylde, who at that time worked for South Yorkshire Shooting Supplies, before forming his own company, Valkyrie Rifles.

The fact I have used and relied on Dave ever since is a testament to how he began and continued to grow into his current format, with nationwide popularity as both a successful competitive shooter and full custom builder. After consulting with Dave, he suggested I choose a .260 Remington, which at that time was nothing like as popular as now and certainly pre-dated the all-consuming Creedmoors of today.

On paper, it offered me improved ballistics over the .308, it would fit easily into my .308 action (identical 0.473” bolt face requirements) and most importantly, Dave assured consistent magazine feed in a rifle I intended to pair with an Accuracy International magazine system. It made sense to have a 1:8” twist barrel, screwcut straight from the word go. I ordered the other parts and when the re-barrel work was complete and back from the proof house, I finished inletting the stock, hand bedded the rifle, did a couple of sessions of ammo development on the range, then went off to win my first competition with it, less than 10 days after proof.

Well this is nice

Rather pleased with myself, I decided the rather plain-looking rifle deserved smartening up, so off it went back to Dave for a Duracoat finish (what people chose before Cerakote was the common norm) in flat black. I now had quite a smart-looking rifle I was rather proud to own, and I took satisfaction in knowing I had done a lot of the work.

Now, it’s important to say that I have extensive manufacturing experience and although not doing the lathe, chambering or coating work, had done everything else on this rifle myself with hand tools, creating a true, sub ¼ MOA rifle that was consistent group after group with hand-loaded ammunition. The action had not been ‘blueprinted’ (extensively remachined to minimise existing weak mass production tolerances), merely had a new barrel and thicker recoil lug fitted as part of that task when cutting the barrel tenon. I went on to fit a Jewell trigger (from Valkyrie) and have since swapped the same rifle into a McMillan stock (bought from Valkyrie/inlet and bedded myself). 13-years on, I still shoot it regularly. Now, with around 2500 rounds down the Border Archer barrel (now no longer manufactured), it still shoots better than I can call the windage corrections.

I loved learning about how each stage had incremental benefits on the rifle and have done similar to pretty much every Rem 700 I have owned because in fairness, some needed it, yet also, showed truer performance because of it, once minor issues, specifically action stress, were corrected. Most shooters will want to use a rifle builder to offer such services and their experience is invaluable as action aside, they will know what stock shapes suit your needs, triggers fit your budget and which cartridges are going to work well in your action as it currently exists. They will also tell you what you can realistically hope for from various modifications.

Re-barrelling a rifle is the biggest task, requiring lathes/tooling and this will more than likely offer you better consistency from tighter tolerances than most factory rifles will offer. On a factory gun, I always inspect and critique stock inlet and interaction with the receiver, as it is a huge factor when it comes to a rifles performance.

Having your trigger attended to, adjusted safely, cleaned or even polished may improve poor performance or make an already acceptable trigger, more predictable. It’s not all about light weight, as the feel of a trigger is usually far more pleasing or disappointing in my mind.

If you need accessory rails fitting, a new bolt knob, or are planning on making fundamental changes to your magazine system, then this is where a rifle builder can show foresight in knowing how to make some of the more challenging short and steeply shouldered cartridges get from that mag to the chamber, without damage or disruption to your position and concentration.

Do you want a shorter barrel to improve portability? Well, any work done on a barrel deserves the respect of a seasoned professional, who will assure precisely cut metalwork to suit your needs, as well as true thread specifications that are compatible with aftermarket moderators and brakes.

The same gunsmith will more than likely diagnose problems with a rifle, from bedding stresses, though worn bores, all the way to that crown, whose damage from corrosion or improper factory tolerances can have a make-or-break effect on getting the best from even brand new, never mind used rifles.

I will say most rifles that pass through my hands show no specific manufacturing faults (failures are returned unreviewed), but a rifle builder who fully understands the mechanics of a gun, not just its sales potential, have the tools and experience to check that ‘firing pin spring’ or the ‘correct headspacing’ of the barrel. Most retail gunshops have an experienced member of staff on hand, even if they aren’t on-site every day. On a factory rifle, any problem should mean a visit to the dealer who sold it to you, but when you modify your gun in any way, it’s no longer as it was sold, and this is where your long-standing relationship with the ‘rifle doctor’ must begin. Whether they or you, do the surgery, they will be the one that you trust to tell you what is needed and often more importantly, not needed. True honesty means a happy customer will keep coming back, especially when they remain uncharged for what was never unnecessarily sold. That relationship for me is with Valkyrie and I trust Dave implicitly. I own four rifles he has built for me (all semicustom) and have used many more of his full custom offerings in reviews.